A backronym is not an acronym written backwards but one that is formed retrospectively. The Oxford English Dictionary (OED) gives two definitions:

1. An acronym formed from a phrase whose initial letters spell out a particular word or words, chosen to enhance memorability.
2. A contrived explanation of an existing word’s origin, positing it as an acronym.

The earliest citation in the OED is from 1983 in the Washington Post, where a backronym was explained as being “the same as an acronym, except that the words were chosen to fit the letters.” Given this definition, it can sometimes be difficult to decide whether what appears to be an acronym is really a backronym.

The technique of microwave amplification by stimulated emission of radiation, invented by Charles Townes and his colleagues at Columbia University in 1953, became known by the acronym maser. When an optical version of this was created, it was called a laser, the l of light replacing the m of microwave. Then, when the technique was extended beyond microwaves to radio and infrared waves, Townes suggested changing “microwave” to “molecular”, making the acronymic “maser” a backronym.

Many medical acronyms are probably backronyms, since the names are often chosen to fit the letters of a word rather than becoming a word after abbreviation. This can be clearly seen in cases where the acronym involves letters other than the initial ones. CHICAGO (Carotid intima-media tHICkness in Atherosclerosis using pioGlitazOne) is an egregious example.

The magnetic resonance imaging technique fluid-attenuated inversion recovery is called FLAIR, which sounds more stylish and impressive than FIR or FAIR. FLAIR can be used to diagnose PRES, the posterior reversible encephalopathy syndrome, characterised by headache, seizures, visual loss, and altered cognition, which was first described, by Casey et al, as being associated with bilateral subcortical and cortical edema with a predominantly posterior distribution. It was also called reversible posterior leukoencephalopathy syndrome (RPLS), although it affected both grey and white matter. Pronounceability and the frequent association with hypertension reinforced the preferred adoption of PRES. However, in later cases posterior involvement was not prominent and in some cases reversibility was not spontaneous. The acronym was therefore reinterpreted as the potentially reversible encephalopathy syndrome. Since the syndrome seems to be a non-specific response to a wide range of conditions, including toxemia of pregnancy, Henoch-Schönlein purpura, acute intermittent porphyria, cryoglobulinaemia, severe hypercalcaemia, transplantation, and immune suppression, this backronym is suitably vague.

Backronyms that are related to the features that they name could be called cognate acronyms. Examples include SAD (seasonal affective disorder), SCARS (severe [or serious] cutaneous adverse [drug] reactions), and CARE (copies, arrangements, results, enclosures, referring to clinical communications). In contrast, HALT-MI didn’t and DEFINITE wasn’t.

The OED’s second definition captures a range of folk etymologies, words whose origins are popularly but incorrectly supposed to be acronymic. They include posh (“port out starboard home”), ned (“non-educated delinquent”), cop (“constable on patrol”), golf (“gentlemen only, ladies forbidden”), and tip (“to insure promptness”). The origins of these words may not always be clear, but these supposed explanations are backronymic and false. 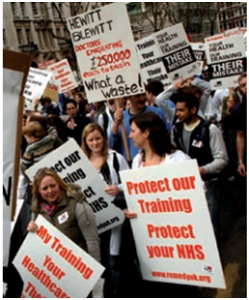 In 2004, the UK government of the day issued a report titled “Modernising Medical Careers” (MMC), which described plans for dealing with the problems of training junior hospital doctors. This led to the implementation in 2006 of a system called the Medical Training Application Service (MTAS, pronounced em-tass), which turned out to be a disaster. Some suggested that MMC actually stood for “mass medical culling” and MTAS for “migrating to Australia soon”, a backronymic intention that some no doubt carried out.