The BMJ‘s readers, even those who have not studied Greek as a language, ancient or modern, will probably be familiar with most, if not all, of the letters in its alphabet, so widespread are they in scientific terminology.

In mathematics and statistics we have the ratios π and φ (the golden ratio), Riemann’s ζ function, the reciprocal Fibonacci constant ψ, and Harish-Chandra’s Ξ function; μ and σ represent the mean and standard deviation of the population normal distribution, Σ and Π respectively represent the sum and product of the members of a series, and χ2 is a statistical distribution and test.

In physics, mesons—and not only those that are charmed or strange—are denominated η, κ, μ, π, ρ, υ, χ, ψ, and ω, among others; ρ is used to denote a type of viscosity, and λ and ν are the length and frequency of a wave. And I haven’t even mentioned the labelling of stars in astronomy, such as Iota Draconis, Xi Geminorum, and Omicron Persei.

In some cases, we have an idea of how the symbol came to be introduced. The π symbol, for example, was introduced by the Welsh mathematician William Jones (1675–1749), perhaps as an abbreviation for the Greek word for circumference, περιφέρεια.

We also use the names of some of the Greek letters to describe what were formerly known as dyslalias and are now called functional speech disorders or articulation disorders: gammacism, lambdacism, rhoticism, and sigmatism.

Gammacism is difficulty in pronouncing the plosive velar phonemes g and k. In one case, it was attributed to recurrent middle ear effusions from early childhood.

Lambdacism is any abnormality in pronouncing the voiced alveolar lateral phoneme l, or substituting l for r, also known as lallation—as heard in some pronunciations of English in the Far East. 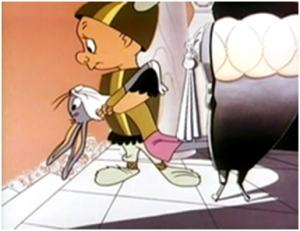 Rhotacism is any abnormality or exaggeration in pronouncing any one of the several different pronunciations of the letter ar. In Chuck Jones’s 1957 cartoon What’s Opera, Doc?, parodying Walt Disney’s Fantasia, the famous rhotacist Elmer Fudd, voiced by Arthur Q Bryan, dressed like a Heldentenor (picture), sings “Kill da wabbit” to the tune of Wagner’s Ride of the Valkyries. Not surprisingly, and contrary to appearances, Bugs Bunny survives.

Sigmatism, colloquially known as lisping, is difficulty in pronouncing the unvoiced and voiced fricative alveolar phonemes s and z. It has four varieties.

The first two forms of lisping are heard in normal speech in children up to the age of about 5, but the other two are not.

The fictional narrator of Richard Gordon’s autobiographical novel Doctor in the House was called “Richard Gordon,” but in the 1954 film version he became Simon Sparrow, played by Dirk Bogarde. In a later movie, Doctor at Large (1957), Bogarde puts his stethoscope on a young girl’s chest. “Now, big breaths, Eva,” he says. “Yeth,” she replies, “And I’m only thikthteen.”