Conversations with my patients can be very revealing.

“I know you say they’re ace, Doc, but I can’t take these tablets.”
“Why not, Pat?”
“They give me a terrible cough. I can’t go to the movies or a gig. Anywhere public, actually.” At this, Pat coughed loudly, concatenating two phonemes without realising it—technically the glottal fricative h and the bilabial nasal m—“h’m, h’m, h’m, h’m.”

“H’m” became “hem” in Latin, and was used, by authors such as Plautus and Terence (both second century BC), as an interjection of surprise or concern (“What’s that?”) and to express unhappiness (“Alas!”). 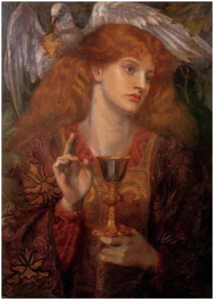 In English it first appeared in the 15th century. Lancelot, Thomas Malory tells us, tricked into sleeping with Elaine of Corbin (pictured) and thinking her to be Guinevere, talked in his sleep about his love for the Queen. Angered, Elaine “coughed so loud that Sir Lancelot awaked and knew her by her hemming.” The outcome was Sir Galahad.

Elaine of Corbin with the Holy Grail, as depicted by Dante Gabriel Rossetti.

In Huloet’s Dictionarie, Newelye Corrected, Amended, Set in Order and Enlarged . . . (1572), John Higgins’s revised edition of Richard Huloet’s Abecedarium Anglico Latinum (1552), “hem” was defined as “a note of blaming, disdaining, marvelling, showing, or of taciturnity.” Shakespeare used it as both an interjection and a verb. Ophelia, Horatio tells Gertrude, “hems, and beats her heart, / Spurns enviously at straws, speaks things in doubt / That carry but half sense.” Othello, wanting a private word with Desdemona, tells Emilia to close the door and “Cough or cry ‘Hem’ if anybody come.”

“Hem” was also used to denote a coughing sound made as a delaying tactic and therefore as a sound of hesitation. “To hem and to hawk,” the latter being another onomatopoeic word meaning to cough, was later shortened to hem and haw, perhaps by association with another sound of hesitation or derision, ha (compare the French “hein”). That then became hum and haw.

The word “cough” is also onomatopoeic, related to the old Dutch and German words cuchen and kuchen. In Greek a cough was βήξ (bēx), with its throat clearing stem βηχ- (bēkh-). In Latin it was tussis, also perhaps echoic, giving modern words like toux (French), tosse (Italian and Portuguese), and toz (Spanish).

However, more Northerly languages have Husten (German), hoest (Dutch), hoste (Danish), and hosta (Swedish). Old Norse had hóste, Old Low German hôsto, Middle Low German hôste, Middle Dutch hoeste, Low German hoost, and Old High German huosto. Hoast (and variant spellings) is a Scots word for cough, also found in some parts of Northern England (for example, Northumberland) and in Shropshire (’oost). The Indo-European root of all these words is KUES, which supposedly echoes the sound made by a squeezed bladder (or cyst), emphasising the connection between coughing and incontinence :>). In Old Teutonic the coughing word was hwôston, giving the Old English word, hwésan, to wheeze.

All these words are related to different types of breathing, like what we call huffing, as in huffing and puffing. According to Lewis Carroll, the nonsense word “uffish” that he used in Jabberwocky reflected a state of mind in which “the voice is gruffish, the manner roughish, and the temper huffish.” Among drug users, to huff means to inhale, usually in reference to marihuana.

You can pronounce –ough in 13 different ways. If you can’t quite remember how to pronounce “cough,” here’s a handy reminder. In the chapter titled “All the News” in Richmal Crompton’s William—In Trouble, Violet Elizabeth treats William to a “croth-word puthle.” The first of its two clues (unconventionally, one down) is “Wot you hav dropps of.” And the answer, of course, is “COF.”