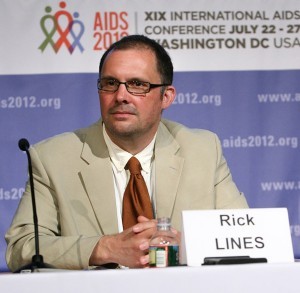 2015 is looking like it could be a watershed year for global health. As the United Nation’s millennium development goals come to fruition, and we move towards a post 2015 sustainable development goals model, there will no doubt be much reflection on where we’ve collectively succeeded—and failed.

There has been much talk in recent years about the beginning of the “end of AIDS,” and we certainly have seen incredible successes, such as the roll-out of antiretroviral drugs (ARVs) to some 14 million people. This has transformed HIV from a death sentence into a chronic and manageable disease—for those on treatment.

However, we’d do well at this juncture to reflect on a parallel but very different reality. Some 20 million people still do not have access to ARVs and so many of them are from the populations most affected: men who have sex with men, sex workers, transgender people, migrants, and people who inject drugs.

We are failing all of these people, but the clearest case of our inability to implement tried and tested science is that of people who inject drugs.

We have known for three decades that in settings where comprehensive harm reduction interventions—such as methadone, buprenorphine, and needle and syringe programmes—have been implemented, HIV rates among people who inject drugs are low—in some cases negligible. This was the primary reason that injection driven HIV epidemics in cities such as London, Glasgow, New York, Sydney, Amsterdam, and Berlin were avoided when AIDS first surfaced in the early 1980s.

While there have been some strong and encouraging examples of leadership on harm reduction in some countries in Eurasia, the Middle East, and sub-Saharan Africa, the bigger picture is one I can only describe as sad.

Sad, because an appallingly low four per cent of people who inject drugs who are living with HIV receive antiretroviral drugs.

Sad, because despite an overall increase in the past two years in the number of countries providing harm reduction programmes, the 2015 millennium development goal target to reduce the HIV incidence among people who inject drugs by 50% sits at only 10%.

Sad, because only an estimated eight per cent of people who inject drugs can actually access opioid substitution therapy or, on a global average, they are only able to access two clean needles every month.

Sad, because far too many countries in all regions of the world don’t think twice about wasting millions of dollars on ineffective, or even abusive, drug enforcement campaigns while saying that they have no money to invest in health and harm reduction.

For those of us who work in harm reduction, hepatitis, and HIV, none of this is news to us. It’s old news, but given that we know harm reduction works, it’s news that bears repeating. Especially in the midst of political and financial retreat from harm reduction policies in pioneering countries, such as the UK and Canada.

Perhaps we should be asking ourselves why it is that in 2015 so many people still have to fight for harm reduction to be started, or defend existing services, despite all the evidence that it is one of the cheapest and most effective health interventions around. Harm reduction works. Governments know that. We need them to bypass the moralising and show humane leadership. Otherwise we will consign millions to unnecessary suffering and a premature death.

And we will not end AIDS.