History of hamstring injury mechanisms
Since 2006, we have known that the mechanism of injury impacts functional deficits, injury location and time to return to play (1-4) . At that point, these mechanisms were viewed as sprint type (occurring, of course, in sprinters) and slow-stretch type (occurring in dancers).  Stretch-type injuries were found to typically have a less severe initial presentation, but take longer to return, and often involved the free tendon of the semimembranosus. Sprint-type injuries meanwhile involved the biceps femoris, and conversely, presented more severely acutely yet tended to return to sport faster. Subsequently, most field-sport based studies describing hamstring injury mechanism call the mechanism simply ‘sprinting’.

Although widely used, are ‘stretch’ and ‘sprint’ terminologies limited?
A thorough systematic review by Danielsson (5) summarises the mechanism of hamstring injuries. The authors concluded that the stretch type hamstring injury occurred in a position of excessive hip flexion with a hyperextended knee, and that sprint-related injuries most likely occurred during late swing phase. This is supported by the work of Thelen (6) who described peak force and maximal negative work being carried out by the lengthened biceps femoris long head during late swing phase, establishing this during upright treadmill running. While this is certainly a useful finding that advances our understanding, questions remain unanswered away from the treadmill, and in field sports where these injuries are so common. Agility and evasion require movements in 3 planes and across multiple joints, including the trunk (Figure 1). If the trunk has a role in ‘stretch’ injury, it follows that it may have a role In ‘sprint-type’ injury? Can such mechanisms be combined? 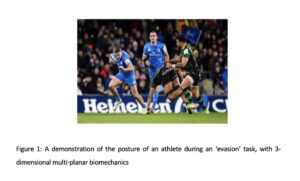 Two studies published at the beginning of 2022in the BJSM examine this concept by using systematic video analysis to describe the mechanism of hamstring injury in elite sport for the first time. Kerin, et al. (7) (Infographic 1) describe injuries in professional rugby occurring in five distinct patterns – running, decelerating, kicking, in the tackle and in the ruck. Importantly, the authors frequently observed trunk flexion and ipsilateral rotation, as well as knee extension at the point of injury. 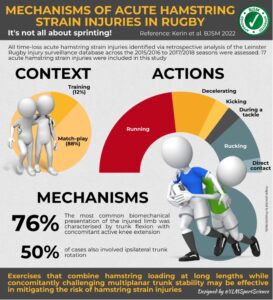 Similarly, Gronwald, et al. (8) (Infographic 2) described the mechanism of hamstring injury in elite German soccer. This study ended any perception that all football injuries are ‘sprint type’ injuries. Of the 52 included, 25 were sprint type and 27 were stretch type. Table 1 demonstrates how the stretch type injuries occurred kicking and braking and were frequently caused by indirect contact from an opponent (i.e., contact to the body but not the hamstring). 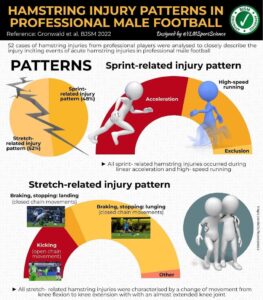 How can this impact prevention and rehabilitation?

With an evolving understanding of the biomechanics of injury, and possible tasks or position of risk, strategies can be put in place to potentially reduce injury incidence. Previously, injury prevention strategists have hypothesized that targeting robustness during late swing phase by training the hamstring muscles in appropriate positions. Such an approach is limited as it gives no consideration to the trunk in any plane. An approach to reduce injuries in rugby may involve improving technique around the tackle and ruck, and training hamstring strength at long muscle length (both in trunk and knee flexion), while challenging stability in multiple planes at the trunk (see video from Jurdan Mendiguchia). Exercises like a Split Stance Romanian Deadlift and Single Leg Hip Extension or Glute Ham Raise – incorporating a single arm row to add a transverse plane component – can be useful. The addition of lateral bounds while holding an Aquabag (or otherwise challenging multiplanar stability) may prepare the athlete for the demands of changing direction.

Can unpicking the mechanism help us diagnose the injury location?
Another potential benefit of integrating mechanism analysis in hamstring injury management is that it may give us further detail as to the injury location. Although Askling found biceps femoris was more frequently injured by sprinters, and semimembranosis by dancers, those findings have not necessarily been replicated elsewhere (1-3). Most stretch-type injuries described by Gronwald, et al. (8) involved the biceps femoris. However, there may be cases where the mechanism of injury is a warning that may create suspicion of a more complex type of injury.

T-Junction injuries – involving the distal confluence of the short and long heads of biceps femoris – have been shown to have amongst the highest re-injury rate of any injury (9) but can only be diagnosed by MRI, a form of imaging which will not always be available. In the same way as a position of forced trunk flexion and knee extension seems to be associated with semimembranosis injury (see Image 2), our group have repeatedly detected a theme amongst athletes with T-Junction injuries (see Image 1). Frequently these injuries occur during late swing phase (or early stance), with a rapid ipsilateral trunk rotation (often to catch a pass, make a tackle, reach for a ball or to look behind them). If this is indeed a pathognomic mechanism, it could be helpful in aiding clinicians and athletes in more optimally managing these challenging injuries.

Image 1: The mechanism of a T-Junction injury in a professional rugby union player, reproduced from Kerin, et al. (7) 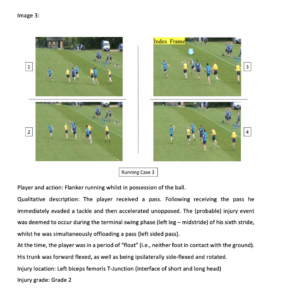