This blog provides highlights of a recent paper regarding gender bias in sports medicine (1).

Recently, physician researchers from Japan and the United States worked together to gain a better understanding of gender bias in sports medicine. Similar to previous findings, it was noted that there is a difference in how female sports medicine physicians are treated compared to their male counterparts.  Based on the results, sports medicine societies and sporting organizations should develop and implement policies around diversity and inclusion, bullying, harassment, and all forms of discrimination. Annual data should also be collected on these across sport to ensure organizations move toward gender equality and safer work environments for physicians of all genders, races, ethnicities and sexual orientations.

Sports medicine operates in a unique environment.  Physicians are required to communicate not only with athletes, but also with coaches, athletic trainers (ATs), and other professions that surround the athlete.

The presence of gender bias could lead to more stress, lower job satisfaction, and higher burnout rates of female Sports Medicine Physicians (SMPs).  In order to achieve gender equity in the sports medicine world, we must first evaluate the environment to identify areas that need to be addressed.

A survey was sent around the world and the responses from 1193 SMPs from 51 countries were analyzed.  They were asked how often they felt disrespected or had their judgement questioned by key stakeholders within athletics as well as how often they were sexually harassed.  The authors then looked at the responses to see if there were different answers between male and female sports medicine physicians.

Female SMPs reported higher rates of sexual harassment than male counterparts by the following groups: male athletes, male coaches, male physicians in practice both longer and shorter than them, male athletic trainers, and administration.  In the survey, 29.9% of female SMPs reported being sexually harassed by male physicians in practice longer than them and 18.4% were sexually harassed by male athletes. 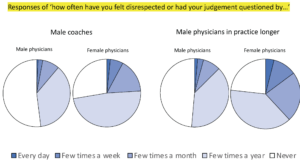 Details of the responses of ‘how often have you felt disrespected or had your judgment questioned by the following?’ on both male and female sports medicine physicians.

We hope this study creates more awareness about the disrespect, harassment, and inequity experienced by women in sports medicine. While all members of the sports environment (athletes, coaches, athletic trainers) should work together and treat each other with respect, the experiences reported by women in this study reveal a toxic work culture that is extremely pervasive and disturbing. We challenge the sports medicine community to examine current practices and offer solutions to make the workplace a safer environment for both men and women across the world.

4Department of Family and Community Medicine, The University of Alabama at Birmingham School of Medicine