In this blog, we will explain how and why we published our paper about female athletes’ under-representation in concussion research that informs consensus and position statements. Our study (recently published in BJSM) was a collaboration between the United States Air Force Academy (USAFA), the University of Georgia, and the University of Michigan.

When you are watching sports, and a player suffers a concussion, you may hear someone refer to a player as ‘entering the concussion protocol.’ So, what does that mean exactly?

The concussion protocol is an agreed-upon set of rules for safely returning a player to their sport after a concussion. Who agrees with those rules? The three major groups setting protocols are 1.) the Concussion in Sport Group (CISG), 2.) the National Athletic Trainers Association (NATA), and 3.) the American Medical Society for Sports Medicine (AMSSM). Every few years, each of these groups convenes their most knowledgeable experts to agree upon the most relevant concussion research and what it says about the best way to allow athletes to recover from injury quickly and safely. These statements are then used widely by clinicians to guide their care for patients with concussion, both male and female alike.

Because these consensus and position statements are so influential within sports medicine, we thought it was worth assessing how much of the ‘best research’ included data from female athletes. Within the United States, Title IX has driven more inclusion of female athletes, but it was unclear if this representation had reached the concussion literature.

We identified the previously listed concussion consensus and position statements as most influential.  The CISG, NATA, and AMSSM statements have the longest history in this area and are frequently cited by other concussion studies, and we know clinicians use them the most.

After identifying these statements, we looked at the research papers cited within each of the three statements and asked the questions: 1.) does it involve human participants? 2.) if so, does it mention whether the participants involved were male or female? Then, we recorded each of these numbers for CISG, NATA, and AMSSM – as well as in a summary spreadsheet.

We read and tallied all the studies from each statement (each confirmed by at least two research team members) and statistically analyzed them.  Reading and assessing three consensus papers and statements from three different groups of experts is likely to give use a more complete picture than any single paper.

We found that female athletes were heavily under-represented in the data used to devise all three statements. Across all three papers, roughly 80% of the data came from males. Perhaps more strikingly, there were 69 (40.4%) all-male studies in these consensus and position statements, but only two (1.2%) all-female studies.

This disparity in under-representing female athletes matters because these protocols are used to guide the diagnosis and return to play of all athletes to play – male and female. If there are differences in how concussions present or resolve between male and female athletes, then protocols will have optimized recovery parameters for male athletes only. To take a couple of examples, it is notable that women have a different likelihood of reporting a concussion and also a greater risk for certain nerve and brain disorders, such as multiple sclerosis. Therefore, it is possible that these differences have practical consequences for recovery from concussion. 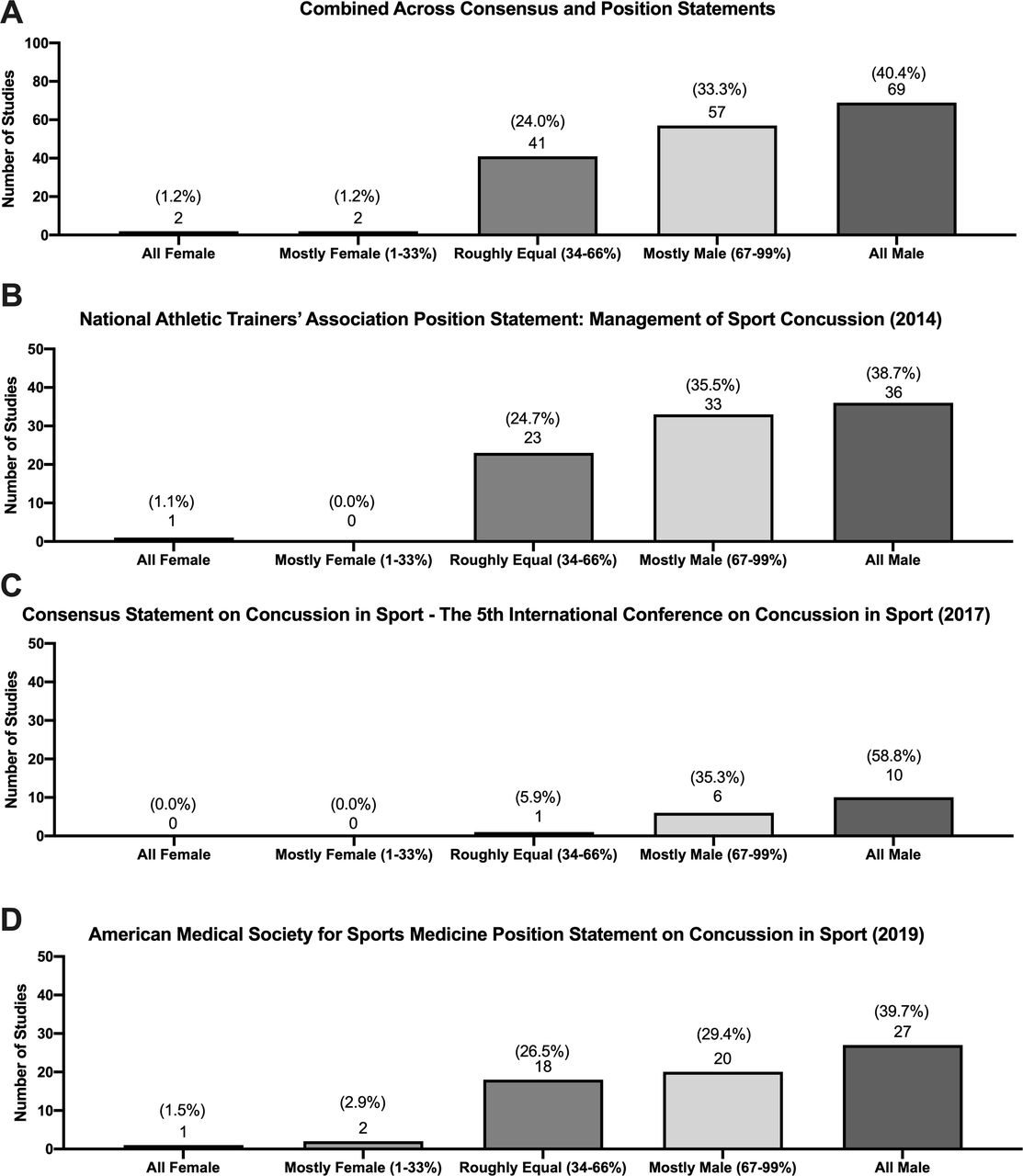 The main point is that we need to do a better job of supporting the brain health of female athletes.

Within the scientific communities, we need to fund more studies that center on female athletes. We also need to increase the representation of women and other communities that have been excluded from this conversation within science. More gender-diverse people in scientific program management, sports medicine research, journal editorial boards, and consensus and position statement writing teams would be better at recognizing these disparities. Increased scientific diversity along other dimensions would also help increase equitability more broadly.

We can help reduce this disparity in two ways within the general public. First, we can support increased public health spending on research on female athletes. Second, we can reduce this disparity by increasing our fan support for women’s sports. Go to women’s games, watch them on TV, and purchase their merchandise. Greater revenue for women’s sports means a greater likelihood of having robust in-place medical staff, better training facilities, and better television production values. These factors can help both concussion recovery and facilitate data collection similar to what we see in men’s sports.

Finally, this under-representation of female athletes is unlikely to be completely surprising to sports medicine researchers. Male sports have more resources, and some male contact sports — such as American football — have large rosters with relatively high rates of concussion that make it easy to collect a lot of research data. However, the value of our analysis is to quantify this disparity in the most critical and widely accessed concussion literature, which had not been previously done. We now have benchmarks to drive future improvements in creating greater equity for female athletes with these precise numbers.

Authors as per published paper, blog submitted by D’Lauro C