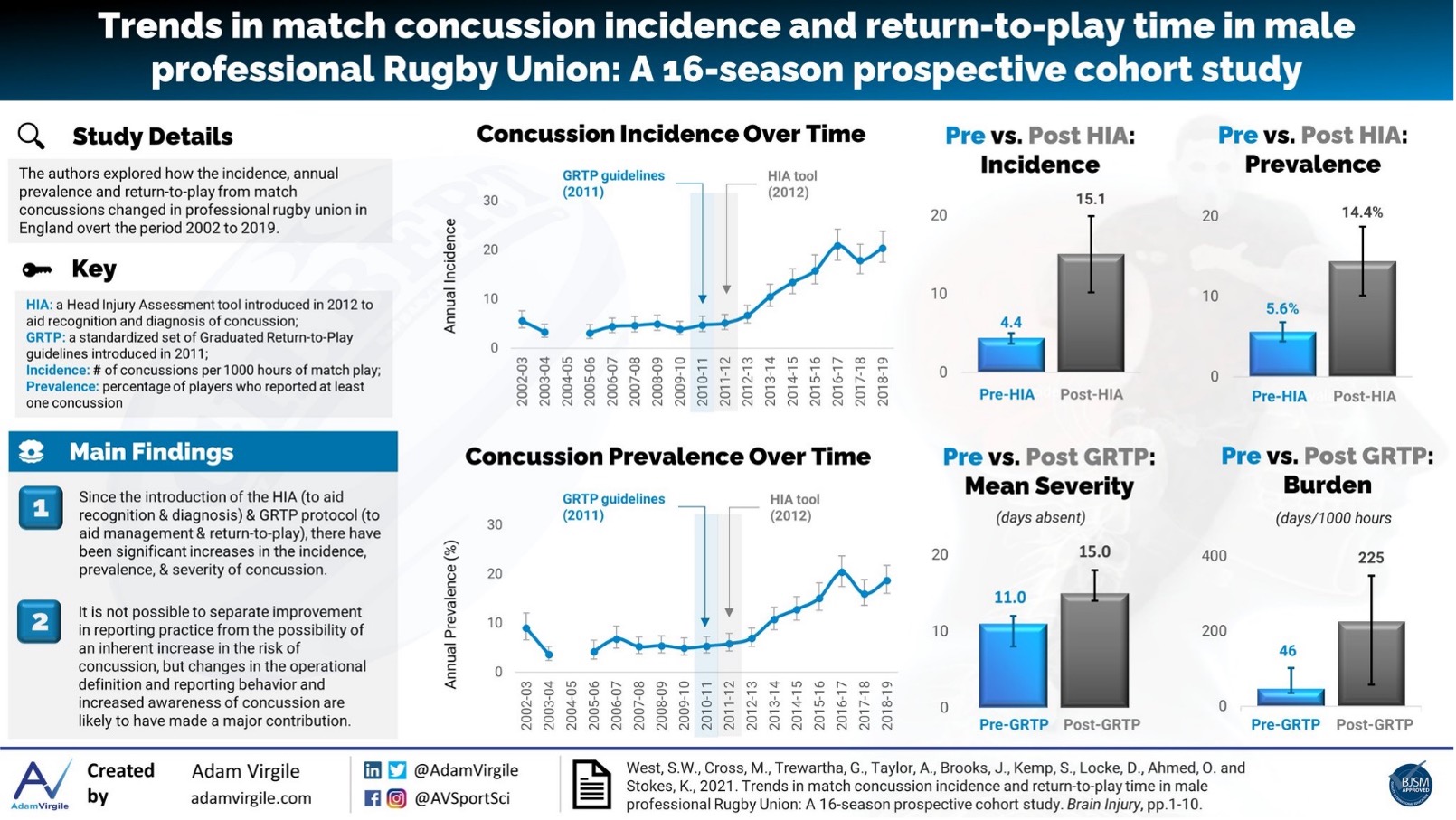 Concussion has been the most common injury in English professional men’s rugby since  2011(1), with incidence rising an average of 1.2/1000 hours every season since 2002(2). Multiple sequential refinements to the process for concussion recognition and management have been introduced in that time, including the introduction of the six-stage graduated return-to-play (GRTP) guidelines in 2011 as well as the Head Injury Assessment (HIA) protocol in 2012 (Figure 1).

The GRTP and HIA: how have they affected the game?

The rate of concussion has followed three phases since 2002: stability (2002-2009), growth 2009-2017) and re-stabilisation (2017-2019: Figure 2). Over the 17-year period, several policies have been introduced as outlined in Figure 2. The combined effect of these measures has been a likely increase in knowledge amongst players, coaches, referees, and medical staff and, subsequently, an increased likelihood of concussions being reported in this population. The introduction of the HIA and GRTP specifically, has been suggested as catalysts for these changes. This is exemplified by a change in incidence rate from 4.4/1000 hours (95% CIs: 3.7-5.0) prior to the HIA introduction to a rate of 15.1/1000 hours (95%CIs: 10.2-19.9) after the introduction, a greater than 3-fold increase. This is demonstrated also in the seasonal prevalence, with a pre-HIA average seasonal prevalence of 5% to a post-HIA prevalence of 18%. In a similar, yet not so dramatic way, the mean and median severity of injuries has risen since the introduction of the GRTP process meaning players miss 15 (mean) and 8 (median) days after a concussion, compared with 11 and 7 days, prior to the GRTP. Importantly however, the average number of players returning in <6 days post-concussion has dropped from 27% to 7%, with no player returning in <6 days since the 2014/15 season (Figure 3).

A commonly asked and important question surrounding changes to reported concussion risk over time is whether the rise in incidence reflects either a genuine increase in risk (due to reasons such as heavier, faster, more powerful players or changes in tackle frequency and characteristics) or greater recognition and reporting driven by improved education and awareness and the enhanced decision making framework provided by the HIA protocol. Although this study does not truly allow us to understand which of these is the case, given that the rate of overall injury and rate of non-concussion contact injury are stable and the rate of non-concussion injuries is declining(2), the increase in concussion incidence specifically suggests a major contribution of increased reporting. This increase in reporting is likely due to the increased awareness of players, medical staff, coaches, and referees who have been completing mandatory education since 2014/15, as well as the wider public and media interest. Finally, the diagnostic criteria for concussion have drastically changed over time, meaning a lower diagnosis threshold for clinicians in sport.

SPTK and KS are employed by the Rugby Football Union. SW and AV have no competing interests to declare.