Brazilian jiu-jitsu is a grappling combat sport and the main goal is submission of the opponent. For this, different techniques are allowed in a competition (e.g. joint locks, chokes, immobilizations, pressures). To compete, athletes are divided according to sex, age, body mass, and graduation, and the factors graduation and age define the length of the match. Between adults, an official match in IBJJF (International Brazilian Jiu-Jitsu Federation) varies between 5 min (white-belts) and 10 min (black-belts).1

Given these characteristics, the physical performance of Brazilian jiu-jitsu athletes becomes complex, as it is necessary to develop the different metabolisms (oxidative, glycolytic, and ATP-CP) as well as the different physical capacities and abilities (flexibility, muscle strength, power, and endurance). For the preparation and organization of specific conditioning programs for these athletes, it is essential that coaches and professionals involved in the process understand the main characteristics of the sport. Therefore, this text aims to present the main scientific findings about Brazilian jiu-jitsu, which are also summarized in an infographic. Information is presented about the athletes’ physical profile, the metabolic, physical, and perceptual responses from the matches, and the main injuries, as well as some characteristics related to the weight loss process prior to competing. 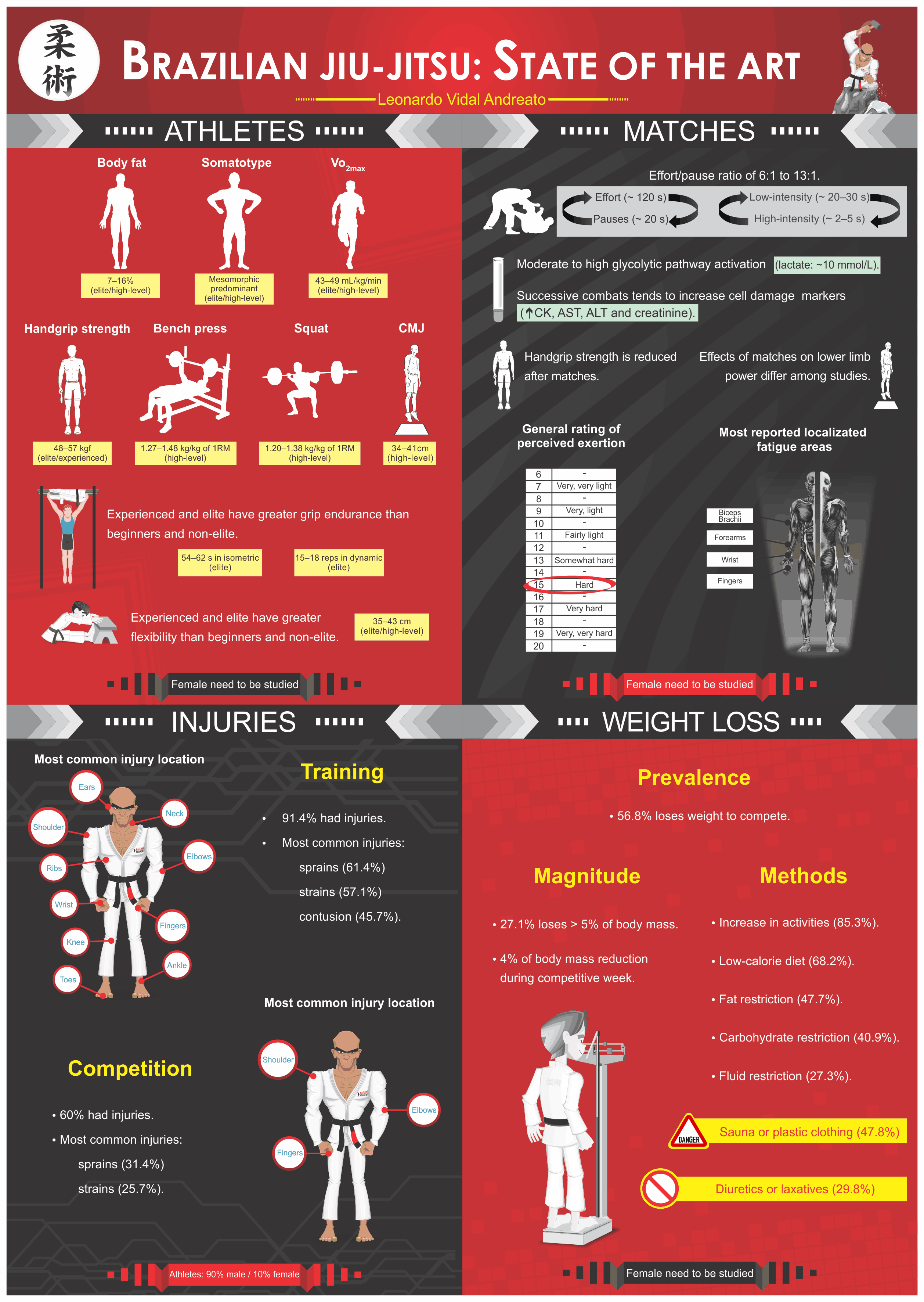 Regarding physical profile, high-level Brazilian jiu-jitsu athletes present somatotypes with a predominant mesomorphic component and low body fat (7–16%), which is relevant since the athletes are divided into weight classes and body fat has a negative association with physical performance in some tasks. Aerobic fitness values vary from 43–49 ml/kg/min, and this physical capacity helps athletes to maintain high-intensity during combats and better recovery between combats, with greater speed in the resynthesis of energetic substrates and removal of metabolites. Brazilian jiu-jitsu matches require a lot of handgrip strength and handgrip strength endurance of the forearm, as the matches involve gripping the opponent’s kimono, such as in moments of gripping dispute, controlling the opponent, and applying techniques. In this sense, athletes presented results of 48–57 kgf in handgrip dynamometer, 54–62 s of static suspension in the isometric test gripping a kimono, and 15–18 rep in the dynamic test gripping a kimono.2

In addition, maximum muscle strength and muscle power are important components for carrying out attacks, counterattacks, and defenses. For dynamic muscle strength, the athletes obtained 1RM of 1.27–1.48 kg/kg in the bench press and 1.20–1.38 kg/kg in the squat. For muscle power, values of 34–41 cm in the countermovement jump were reached. Lastly, flexibility is an important component for the execution of specific techniques during matches, such as guard attacks and defenses. In this sense, the athletes reached 35–43 cm in the sit and reach test.2

Metabolic, physical, and perceptual responses from the matches

Brazilian jiu-jitsu matches involve intermittent actions, which generate an effort:pause ratio of from 6:1 to 13:1, with approximately 120 s of effort and 20 s of pause, as each effort block comprises 2–5 s at high-intensity alternated by 20–30 s at low-intensity. These temporal characteristics generate moderate to high glycolytic pathway activation (~ 10 mmol/L of lactate after the matches), and successive matches tend to increase cell damage markers (creatine kinase, aspartate aminotransferase, alanine aminotransferase, creatinine). Regarding physical performance, handgrip strength is known to be reduced after matches, however, the effect of matches on lower limb power is not yet clear, as there are differences in outcomes between studies. Athletes classified the matches as hard in the rating of perceived exertion (6–20 Borg scale), and the biceps brachii, forearms, wrists, and fingers are the most reported areas of localized fatigue.3

The majority of athletes (56.8%) lost body mass in order to compete; 27.1% lost more than 5% of their body mass, and a 4% reduction in body mass was observed during competitive week. For this, the athletes adopt different methods, such as an increase in physical activities (58.3%), low-calorie diet (68.2%), fat restriction (47.7%), carbohydrate restriction (40.9%), and fluid restriction (27.3%). However, caution is needed, since 47.8% of the athletes use a sauna or plastic clothing, and 29.8% take diuretics or laxatives to reduce body mass.5