In most types of combat sports and martial arts, contestants compete within specific weight categories. In order to fit in the weight category, fighters commonly undergo intentional rapid weight loss before competitions. Body weight can indeed be an advantage in full-contact types of fights such as wrestling, judo, full-contact karate and others. However, in striking martial arts, such as taekwondo and the classical Shotokan karate, competitors usually rapidly move with forward striking movements in a manner somewhat similar in motion to fencing. In these sports, body weight may seem less advantageous compared to contestants’ height. Further, the habit of rapid weight loss carries health detriments and should be minimized, or preferably, eliminated. 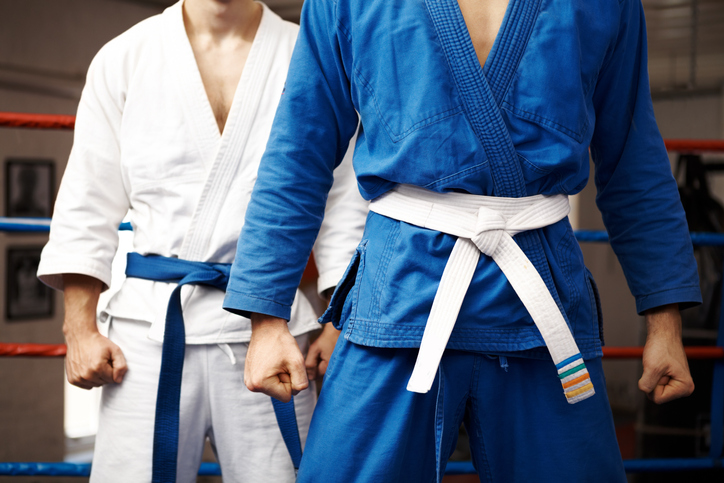 The problem: rapid weight loss has a medical and tactical toll

The negative effects of rapid weight loss on sports performance and athletes’ health are well known [2] and include decreases in lean body mass, performance, vigor, fluid and carbohydrate stores and immunity, alongside increased fatigue, anger, anxiety, tension and confusion. Rapid weight loss methods such as fasting, diuretics, hot saunas and exercising in nylon sweat suits (“sauna suit”) can cause severe dehydration and electrolyte imbalances. Several unfortunate deaths of athletes had been associated with such practices. Having several weight-class tournaments throughout the year also brings about chronic abnormal eating behavior [5,6]. In order to protect the health of athletes engaged in combat sports, alternatives to weight classes should be sought.

As stated above, for tactical reasons in striking martial arts, height may play a more important role than weight, and could be the factor controlled for when pairing contestants. This alternative to weight categories would eliminate rapid weight loss practices, and will surely improve the physical and mental qualities of the athletes. The fighters will merely need to maintain a healthy diet throughout the season, just as in any other sport, with a much lesser need for chronic disordered eating and dieting habits.

de la Fuente performed a similar study in 153 pediatric competitive taekwondo athletes, and also found that nearly 70% of contestants would have stayed in their corresponding weight category when divided by height [8]. She concluded that young competitive taekwondo athletes can be categorized by height in official competition, as a healthier and more equitable alternative to the current weight divisions.

Our project also had a third part that complemented the assessments of eating disorders and weight loss in young taekwondo athletes [3,4] and the creation of the height categories [7]. In this part, we organized a local height-category based competition among 38 fighters, yet the sample was too small for any formal analyses (unpublished data). Studies with much more contestants are needed, and most importantly, with endorsement by governing taekwondo bodies. October 2019 may be a landmark in promoting height categories: a pilot test competition using two height categories was implemented in the European Cadet Taekwondo Championship, proposed and organized by the Games Committee Chairman Mr. Ali Sagirkaya [9]. I truly hope that this will be the first step towards replacing weight with height categories in taekwondo. I also hope that other martial arts will follow, thereby protecting their athletes’ health while potentially improving the quality of the match.

Gal Dubnov-Raz is a pediatrician and sport medicine specialist, director of the Sports and Exercise Medicine Service at the Sheba Medical Center, Tel Hashomer, Israel. He is the chairman of the Israeli Olympic Committee Medical Commission, and secretary of the Israeli Society of Sports medicine. He is married to a physical education teacher, has 4 active children, and holds black belts in Taekwondo and Dennis Survival Jiu-Jitsu. When asked “how are you?”, he frequently replies “Alive and kicking!”