Authors of this Editorial that is in press with BJSM: Geoffrey T. Burns, MS and Nicholas Tam, PhD

In 2018, runners wearing the new Nike® Vaporfly 4%TM running shoe broke world records over the 100km, marathon, half-marathon, and 15km distances. This shoe has advanced the benefit of footwear further and more substantially than any other previous shoe. When Nike compared its energetic cost (running economy) to contemporary elite racing shoes, the Vaporfly provided a 4% superior economy (hence the shoe’s moniker) and an estimated 3.4% increase in running speed1.Independent laboratory testing2 and big-data performance analyses3 corroborated the benefit. It was clearly part of the sub 2 hour marathon.

The International Association of Athletics Federations (IAAF) rule 143.2 stipulates that shoes “must not be constructed so as to give athletes any unfair assistance or advantage”4. While the Vaporfly gives runners an advantage, it does not violate current IAAF rules.  However, many in the running community debate whether this shoe blurs the line between physiological and technological performance, and many have called for more explicit regulations. 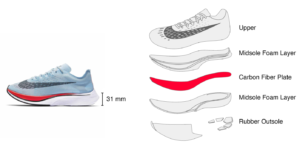 The Vaporfly deviates from conventional running shoes in three ways: (i) an embedded carbon-fibre plate, (ii) its midsole material, and (iii) its midsole thickness (figure 1). Each of these components has design features that reduce energy loss in isolation and, perhaps more-so, in combination.

The full-length embedded carbon-fibre plate increases the longitudinal bending stiffness of the shoe, reducing running economy by 1%5. While widely used in sprinting spikes, it was an uncommon addition to long-distance racing shoes. The plate stiffens the metatarsophalangeal joint and acts as a lever to reduce the work rate at the ankle6.

The midsole of the shoe is Pebax foam, a polyamide block elastomer (PEBA) commonly used as a rigid plastic in shoe outsoles. When manufactured into a foam, it has two advantages over traditional ethylene vinyl acetate (EVA) or thermoplastic polyurethane (TPU) midsoles: it’s lighter and more resilient. When comparing the resilience of each material in other racing shoes, Nike’s Zoom Streak (EVA-based) “returns” 66% of energy under compression, adidas Adios Boost 76% (TPU-based), and the Vaporfly 87%1. Thus, 32% more energy from each footfall is preserved.

The PEBA foam is also less dense than EVA or TPU. This gives the shoe more of the highly-resilient material without adding mass. The Vaporfly has a 31mm heel-height, and weighs 184g, whereas the Streak has a 23mm heel-height and weighs 181g. This provides the energetic benefit of increased cushioning without added weight7,8. The thicker midsole extends the effective leg length of the runner. An 8-mm increase in effective leg length could reduce the cost-of-transport for the runner and account for ~25% of the advantage of the Vaporfly9,10.

The combined advantages of these individual design features are difficult to separate. The midsole foam provides both superior energy return and reduced mass. Is the material structurally feasible on its own, or is the plate necessary to stabilize it? Is the benefit from the plate augmented by the angle it extends through the shoe and therefore only afforded by its thicker midsole? These components are interacting in concert, rendering it difficult to disentangle their advantages.

Thus, selecting parameters for shoe regulation would be troublesome up front and operationally burdensome over time for the IAAF.  It would perpetuate technology debates and give rise to myriad convoluted standards rife with historical contradictions. Running shoes are inevitably a blend of materials: midsole foams of different densities, rubber outsoles of varying configurations, and rigid pieces embedded in distinct architectures. Attempts to implement comprehensive rules covering every facet of a shoe’s design is a band-aid approach that is not feasible.

How do we regulate shoe “fairness”?

Given the complexity of shoe design and the resulting tension between encouraging technological development and retaining the “spirit of the universality of athletics”, we propose a single standard in competition running shoes: regulate the shoe midsole thickness.

This proposal for a simple geometric constraint defines the space of a “shoe” on an athlete but does not attempt to regulate dynamic mechanical parameters such as compliance or resilience.  Moreover, a precedent exists: IAAF Rule 143.5 stipulates a sole and heel thickness for shoes used in high jump and long jump competitions. A similar rule in road racing would provide a transparent standard that supersedes the band-aid approach of litigating every new development.

What do we suggest?

A midsole-thickness standard would regulate running shoes on their fundamental mechanical function—as springs. This is akin to simply regulating length of the spring and would encourage further technological advances by allowing manufacturers to develop lighter and more perfect springs (i.e. approach 100% efficiency in energy return while minimizing mass and optimizing architecture). It would give runners the freedom to wear any combination of materials including EVA, PEBA, rubber, carbon-fibre, or something yet be discovered. Most importantly, it would prevent running shoes from evolving into some unrecognizable extension of the body. If set at 31mm, for example, current competition footwear would remain eligible and future advances would take place within this geometry, ensuring that footwear remains an accessory to physiological competition.

A standard for a maximal shoe midsole thickness provides a simple, robust, enforceable rule for footwear in athletics. It would protect past, present, and future performances under a single operational definition of “fair” competitive footwear. It would prevent running competition from devolving into an “arms race” of additive, larger, and more complex shoes and retain the essence of the competition for what it is—a foot race.

Thanks to Dr. Ronald Zernicke for his thoughtful input and review.

GB receives athletic support from the United States Track and Field Association and Altra Running.  NT has no competing interests to declare.

Both GB and NT conceived and designed the piece, revised it and approved final version. They are accountable for all aspects of the work.

[4] International Association of Athletics Federations. Competition rules 2018 – 2019. Available at: https://www.iaaf.org/about-iaaf/documents/rules-regulations. Accessed on May 17, 2019.