As the 2018/19 rugby union season continues, player welfare is (once again) a hot topic amongst pundits, the media, and fans. Rugby at the community level is a form of physical activity and has overall physical health and wellness benefits. But what about elite players? What health issues do they encounter? Last season, we saw professional players call for a reduction in the number of competitive matches to limit injury risk and increasing reports of players retiring early due to injury (BBC News, 2018; BBC Sport, 2017). Early in the current season, we’ve already seen a player retire due to repeated concussive injuries (BBC Sport, 2018). Echoing conclusions from Williams et al. (2017) who suggested that players exposed to 35 or more matches in a 12 month period were significantly more susceptible to injury, the Rugby Football Union (RFU) has recently declared an upper limit of 35 matches per season for elite players in England. These revelations raise the question: is the impact of injuries getting worse in elite rugby?

The RFU report into injuries during the 2016/17 English Aviva Premiership season demonstrated that injury incidence and severity had increased from the previous season, and were both greater than the mean for the whole data collection period (2002/03 season onwards; RFU, 2018). Among one of the most concerning findings was that concussion was (again) the most commonly reported match injury, with an incidence of 20.9/1000 player match hours (RFU, 2018). There has been a dramatic rise in match concussion incidence reported by the RFU season-by-season since 2009/10. This has been reflected in other research, with Rafferty et al. (2018) demonstrating that concussion incidence increased across a four-year period to 21.5/1000 player match hours by 2015/16 in elite Welsh men’s rugby (figure 1). This recent rise in concussion frequency suggests one of two scenarios – either concussion incidence is truly rising in elite rugby union; or widespread historical under-reporting has caused false incidences in previous data, and as recognition of the injury improves, a true incidence is gradually being reached. Taking into account the amount we still do not know about its various short- and long-term consequences, either of these circumstances is highly perturbing. The more studies of elite groups of players that are performed investigating injuries in general and concussion specifically, the closer we will get to fully understanding the aetiology of injuries, and the magnitude of the injury problem. 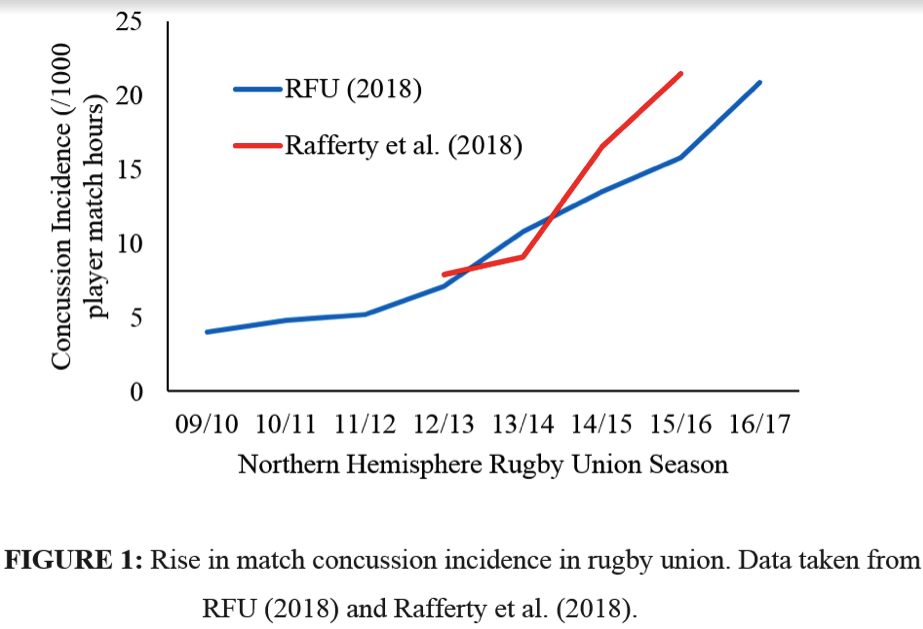 There is an identical need for similar contemporary research into women’s rugby. In the elite game, injury aetiology was examined amongst the England international squad for the 2001/02 season, and injury epidemiology studies were produced from the Women’s Rugby World Cup in 2006 and 2010 (Doyle & George, 2004; Schick, Molloy, & Wiley, 2008; Taylor, Fuller, & Molloy, 2011). However, no research appears to have been published in the 15-a-side format of game since these studies. As a greater magnitude of professionalism is established for the elite women’s game, it would be expected that players being paid to train full-time would result in increased training volumes, altered physical characteristics, and greater match collision frequency and intensity (Quarrie & Hopkins, 2004; Sedaud, Vidalin, Tafflet, Marc, & Toussaint, 2013). In order to better comprehend the injury aetiology, and therefore be able to start to mitigate injury risk, contemporary research studies into women’s rugby injuries in a variety of settings are necessary.

A PhD research project aiming to investigate injuries and concussion in elite Scottish Rugby over the 2017/18 and 2018/19 seasons commenced in April 2017, joint-funded by the Scottish Rugby Union (SRU) and Edinburgh Napier University. Due to an attitude prioritising player welfare, Edinburgh Napier University and the SRU have collaborated to fund this research to further the scientific understanding of injuries in general and concussion specifically across elite rugby union in Scotland. The PhD project in question will report on match and training injuries sustained by Glasgow Warriors, Edinburgh Rugby, Scotland Men and Scotland Women over the 2017/18 and 2018/19 seasons, as well as a meticulous analysis of concussions sustained during this period. This will provide an up-to-date epidemiology on all injuries and concussion in elite men and women’s rugby, establishing the groundwork to later attempt to reduce concussive risk in Scottish rugby.

Athlete welfare is of the greatest concern for all those involved in rugby union, and the current research will provide an opportunity to increase the understanding of the nature of injuries in Scottish rugby union players as well as adding to the scientific evidence-base available in elite rugby union, benefitting the worldwide rugby union community.

Stuart @stujohnbailey is halfway through his PhD research, entitled “Concussion Injury Patterns in Elite Scottish Rugby Union”. It a collaborative research project funded by both Edinburgh Napier University and Scottish Rugby. Stuart is also working on other studies as part of his PhD, aiming to elucidate the influence of certain risk factors for sustaining a concussion in rugby, as well implementing a neck functioning programme aiming to minimise concussive risk.