Taking dietary antioxidants in the form of supplements (e.g. tablets, capsules, powders) or antioxidant-enriched foods (e.g. food concentrates) in doses much higher than the recommended amounts (up to 10 times the recommended daily amounts) several days before and after exercise has been proposed as a way to prevent or reduce muscle soreness.

It has been reported that although physical activity is beneficial to health, all forms of exercise cause oxidative stress(partly due to increased oxygen consumption) and could deplete the body’s antioxidant defences, and increase the rate of free radical production (Powers & Jackson, 2008). Moreover, unaccustomed, eccentric or exhaustive exercise may also induce inflammatory reactions that contribute to increased reactive oxygen species production and reduced antioxidant defences, causing exercise-induced muscle damage and subsequent muscle soreness (Tsai et al., 2001). Dietary antioxidants may counteract oxidative stress however by reducing the free radicals and reactive oxygen species associated with exercise (Powers & Jackson, 2008). Reducing DOMS could be beneficial to athletes returning from injury (i.e. after a period of inactivity), and might help sedentary and older individuals recover from unaccustomed physical activity.

The ease of taking antioxidant supplements for pain relief and improved recovery makes this an attractive option for physically-active individuals. Further, some athletes strategically consume antioxidant supplements to accelerate recovery during periods of intense competition, rather than take them every day. For example, in professional football, fixture congestion makes the optimisation of recovery between matches challenging; a team might play three matches in an eight day period (e.g. Premier League fixtures Saturday to Saturday separated by a mid-week Champions League fixture); dietary antioxidant supplementation could be strategically consumed to reduce inflammation and muscle soreness. This would allow the players to recovery more quickly in preparation for the next match. In professional cycling, a Tour de France rider may take antioxidant supplements to accelerate recovery after each stage in order to recover more quickly for the following day’s stage. However, our initial investigation, based on a small sample of the trials testing antioxidants for reducing DOMS, showed that the evidence to support these claims was mixed (Ranchordas et al. 2017). Further, there is also conflicting evidence on the potential for adverse effects associated with antioxidant supplementation, including the impairment of post-exercise adaptations both acutely and chronically (Paulsen et al., 2014). The above underscored the need for a systematic review of all the available trials.

Our review included 50 randomised controlled trials with a total of 1089 participants; 88% of the participants were male;12% were female and the age ranged from 16 to 55 years. The antioxidants that were used varied from vitamin supplements such as vitamins C and E; whole foods such as blueberry smoothies and pomegranate juice; tea and extracts such as curcumin which is found in Turmeric. The doses consumed were higher than the recommended daily amount, and the type of exercise undertaken also varied but was enough to induce muscle soreness

The majority of these studies had design features that carried a high risk of bias, or in other words had problems with selective reporting and poorly described allocation concealment, potentially limiting the reliability of their findings.

Overall, our review found that antioxidant supplementation might reduce muscle soreness very slightly in the first three days after exercise. However, these reductions were so small that they were unlikely to make any difference.

Of the studies we looked at, only nine reported adverse effects. Two of these found some people who took antioxidants experienced gastrointestinal distress – such as diarrhoea, indigestion and bloating.

On top of our findings, there has also been an emergence of studies showing that chronic antioxidant supplementation may actually be counterproductive. For instance, it has been shown that antioxidant supplements may delay healing and recovery from exercise (Teixeira et al., 2009) and hinder adaptations to training (Paulsen et al. 2014), and may even increase mortality (Bjelakovic et al., 2007).

Taking all of this into consideration, antioxidants supplements are perhaps a waste of money. Instead, move more; exercise regularly; eat a balanced diet; one that includes at least five or more portions of rainbow-coloured fruits and vegetables. Because for now at least, there appears to be no quick fix to easing muscle soreness after exercise. In fact, it seems muscle soreness is actually an important part of the recovery process, and helps to make your muscles stronger and bigger over time. And it’s this important recovery process that will ultimately help to make you fitter and stronger in the long run. 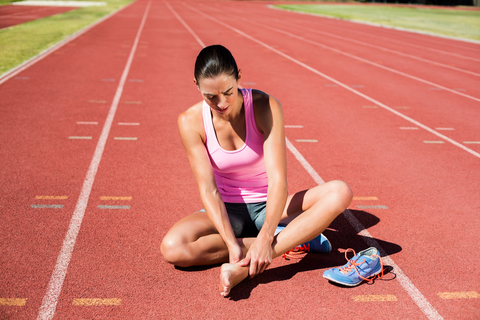