Are you seeking more knowledge? Are you seeking more fun? Good news, if you want an epic combination of research and beers, look no further than Sports Kongres! Hosted in the lovely city of Copenhagen, this year’s edition featured 700 researchers and clinicians from all over the world, making it the largest sports conference ever held in Denmark!

If you’re anything like me, you suffer from severe FOMO when you’re not at a major conference. To remedy that FOMO, I thought I’d write up this “all things awesome about Sports Kongres” blog for anyone who couldn’t make it to Copenhagen, doesn’t own a Twitter account (who are you and how did you find this blog?!), or attended but want to relive their cherished memories.

Needless to say, my brain saw a massive spike in usage over the three days. The poor guy is still recovering. Thankfully, a few cells are operating at their usual 37% capacity. And those few brain cells present to you (in no particular order) my top 5 awesome messages from Sports Kongres 2018:

Keith’s keynote kicked off the conference by digging deep into connective tissue. Maybe not the sexiest topic but it’s crucial to understand the molecules behind our movement. He pointed out that two things make our tissues stronger: collagen and cross-links. That is, more collagen and more cross-links lead to stronger and stiffer tissues. This is highly desirable in something like ligaments where greater strength means withstanding more force and being less vulnerable to injury. But what about tendons? What is its ideal structure and function? This a trickier question because tendons are unique in that they are the bridge between a compliant tissue (muscle) and a stiff tissue (bone). 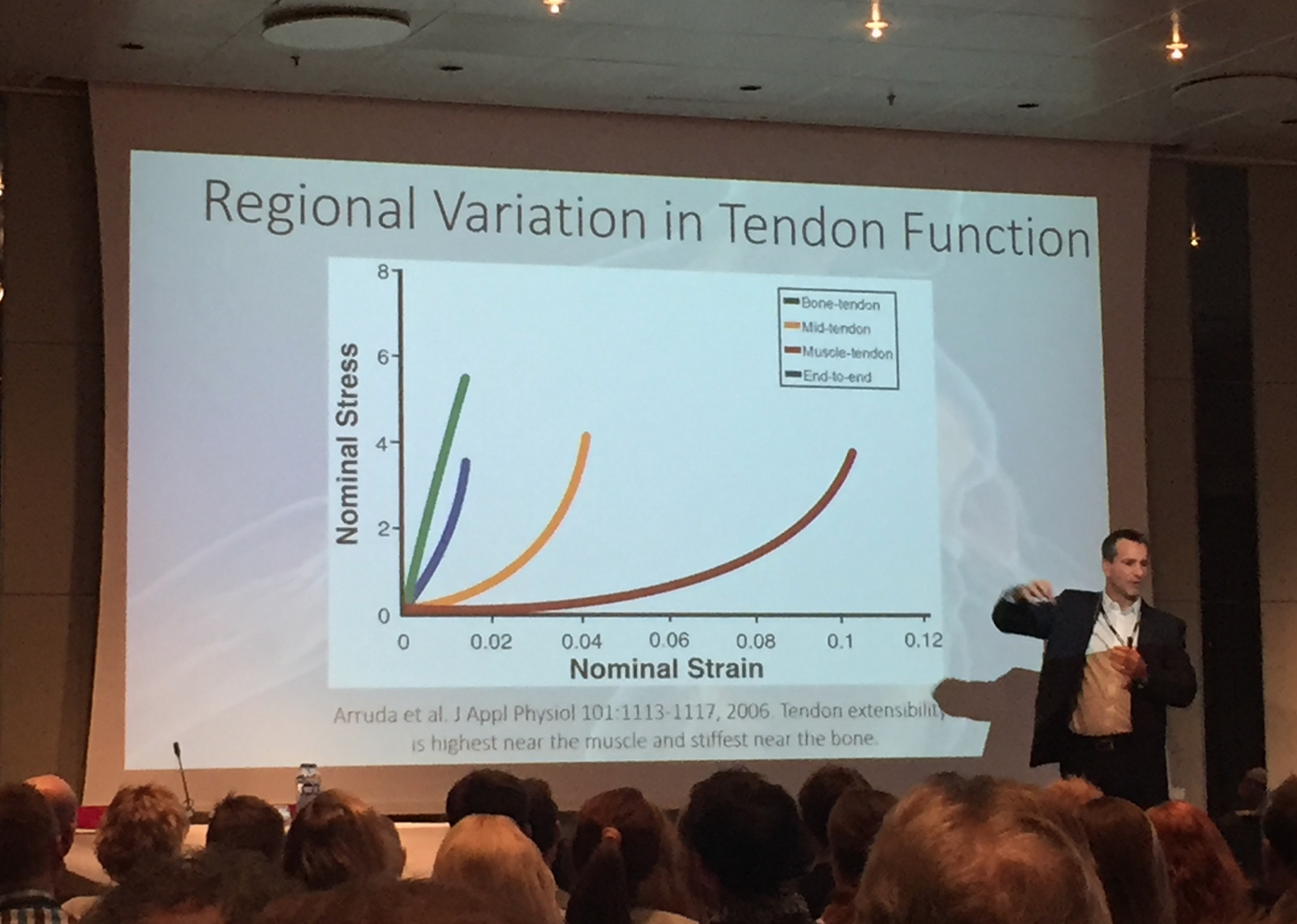 The answer is tendon function must vary by region!1 This means the bit closer to the muscle should be more mobile and the bit closer to the bone should be more rigid. In other words, at the myotendinous junction (MTJ), there is a shearing force which causes cross-links to break and the tendon to be more extensible. At the bony insertion, there is minimal shearing and minimal cross-link breakdown which leads to a stiff tendon region. Balancing these two dynamics should lead to a well-functioning tendon unit.

Now that you’ve wrapped your head around that, let’s see how it applies in a practical setting. Inactivity leads to stiffness of the tendon at all regions. This is not ideal, especially at the MTJ. So how do we restore tendon function following immobilization, rest, underloading, etc? The key is heavy and slow loading. This type of loading increases shearing at the MTJ which increases cross-link breakdown and ultimately restores the extensibility of the tendon at the MTJ! From some animal and in vitro studies, Keith suggested short periods of activity (5-10 minutes) followed by long periods of rest (6 hours) might be the key to optimizing connective tissue health.2 Well go on then, test it out!

Ask physios, doctors, or even patients what to do after they sprain their ankle. Everyone rattles off protection, rest, ice, compression, and elevate – PRICE! Well, I hate to break it to you but the price ain’t right.

Chris gave us a great overview of the literature supporting all the components of PRICE. But ice, compression, and elevation have varying levels of evidence. Did you know we’ve been applying ice for 2000 years yet there are only 9 RCTs looking at its effectiveness? There is some science showing us that ice helps for decreasing pain but effects on inflammation are unknown.3 Moving on, compression is meant to reduce edema (which is good) but might negatively affect lymphatic function (which is not so good). The rationale behind elevation is to negate the effects of gravity and reduce hydrostatic pressure. But these benefits only occur while elevated and it’s impossible to walk around with your ankle above your head all the time. Subsequently, the “ICE” part of the acronym can still be helpful but might not be as useful as we think. 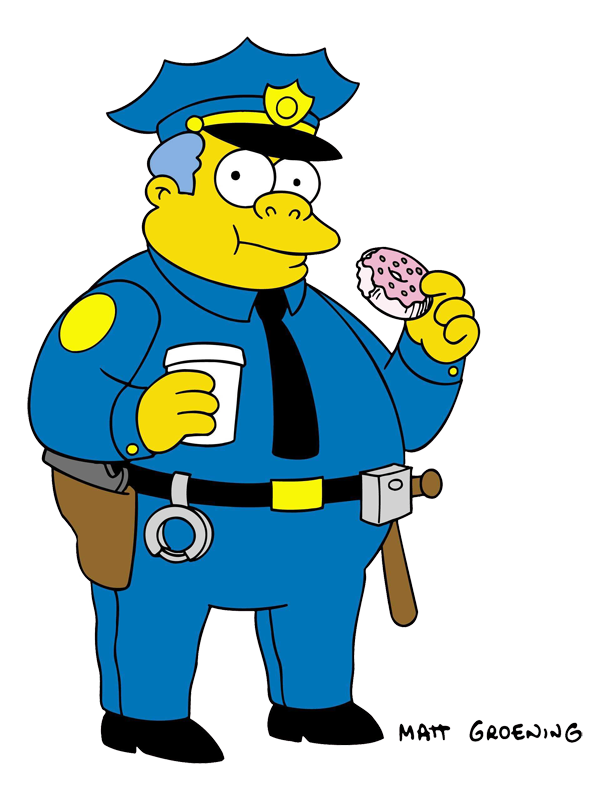 So where does the “OL” come from? If you’re Danish, you know øl comes from a brewery. But this “OL” stands for optimal loading! Yes, we are officially trading in “R” as in rest for “OL” as in optimal loading! Don’t be fooled and interpret this as any kind of loading. If someone has an acutely sprained their ankle, you’re not going to recommend jumping on the first day. Tissue healing timelines still apply! Perhaps optional loading is more appropriate. It doesn’t mean all rest but it doesn’t mean all load either. It implies loading to whatever extent you are comfortable with and whatever is safe! So the next time your handball teammate rolls her ankle, go call the POLICE!

I will fully admit my bias here. Physical activity, particularly in youth, has been an area that I’ve become more interested in since starting my PhD. So this presentation wowed me. Jasper has cleverly combined GPS, accelerometer, and GIS data to measure physical activity trends and behaviours in school children. Technology FTW! We know that many youth do not meet physical activity recommendations (shout out to Dr. Ulf Ekelund’s presentation) but we don’t know the best way to change this.4 Understanding the daily activity habits of children can give us better insight on how to get those little legs moving! Check out this quick video demonstration on how Jasper’s lab tracks school children’s activity throughout the day:

I will also fully admit to watching this video hundreds of times (and subsequently muttering at the guy who cuts in front of my video hundreds of times). Fascinating, isn’t it? This allows us to figure out exactly when and where kids are the most active! Jasper found that kids get the majority of their exercise from school and leisure – sort of expected. But he also showed that these school children from Copenhagen received roughly 20% of their activity from transport. That is, going from home to school or school to the football pitch is a simple way to get the heart pumping and rack up physical activity minutes. I’m looking forward to seeing how Jasper’s team will utilize this data to inform future physical activity interventions!

In a brief 10-minute presentation, Jack hit us with RCT findings on hamstring rehabilitation with and without a pain tolerance threshold. How cautious should we be with self-reported pain after a hamstring strain? Well Jack’s RCT separated 43 participants into two treatment arms: one where no pain was tolerated during exercise progression (i.e. pain-free group) and one where 4/10 pain was tolerated (i.e. pain-threshold group). The exercises used in the study are shown below. 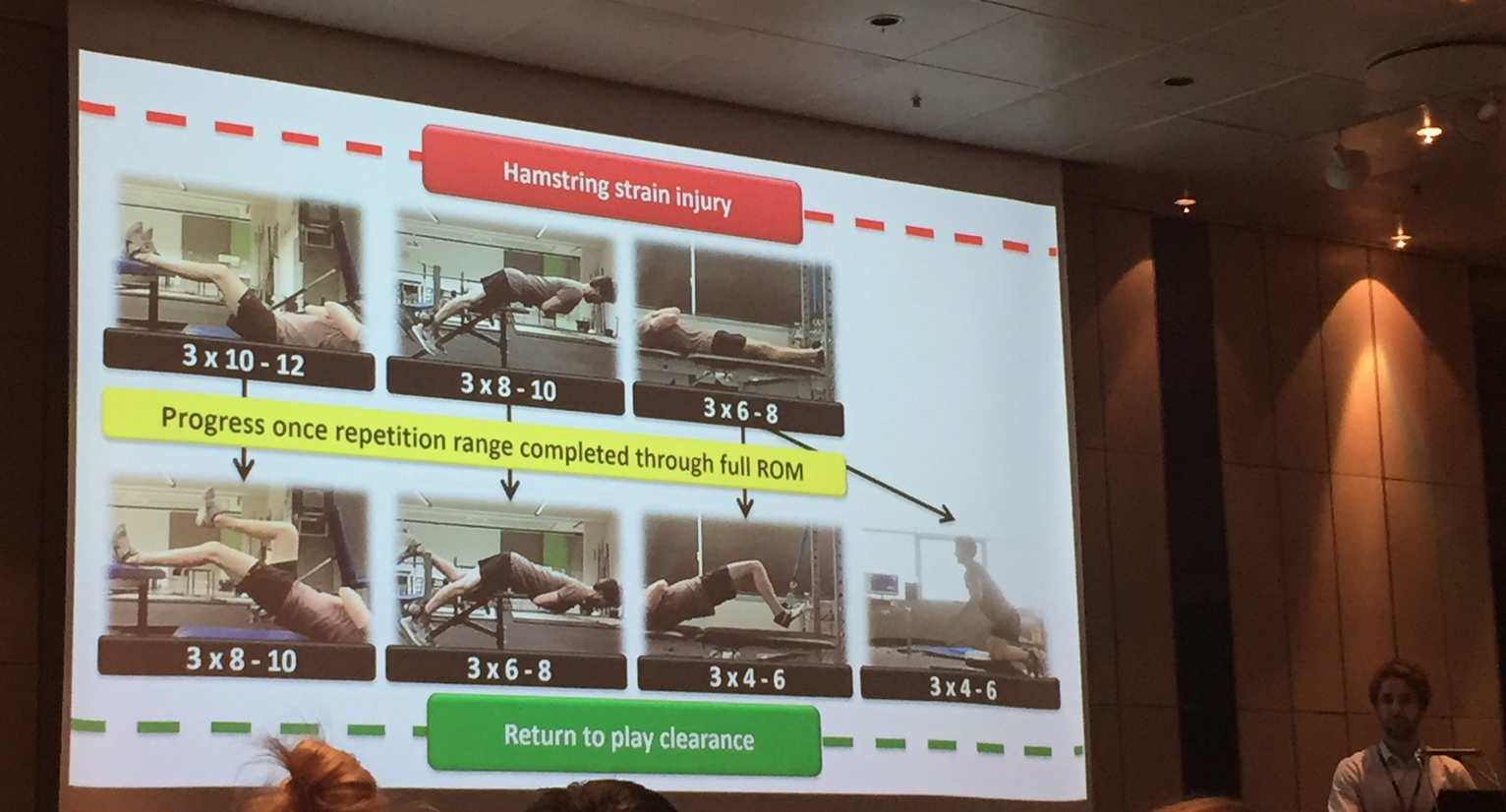 Let’s talk return to sport because that is the first question that always pops up. Well, I hate to break it to you but there was no significant difference in time to return to sport between the two groups. Okay, so what about changes in strength? Both groups managed to escape the infamous “quadrant of doom” following their exercise-based recovery. That is, they both went from short and weak to long and strong. But the pain-threshold group showed greater eccentric hamstring strength after rehab! Considering there’s evidence that says eccentric strength is a predictor of future hamstring injury, this could be a relevant clinical finding!4 The morale of the story is that you don’t have to completely avoid pain during hamstring strain rehabilitation, a little bit is okay!

During the Cold War, there was a spike of carbon-14 in the atmosphere due to nuclear bomb testing. However, the Test Ban Treaty signed in 1963 halted testing and resulted in a sharp drop in atmospheric carbon-14. Okay, Christina, why don’t you become a bloody historian? Patience, young Jedi, it will make sense soon…

So this rise in carbon-14 was incorporated in plants as a fancier version of carbon dioxide (14CO2). Animals eat plants. Humans eat plants and animals. And therefore, those born in this time period ended up with more carbon-14 in them which reflected the increased levels of atmospheric carbon-14. Great, Christina, now you’re a biologist? We’re almost there, sit tight!

Here is where it comes together. When testing these Cold War babies, it was hypothesized that tissues with no or slow turnover will contain carbon-14 levels that reflect the increased atmospheric carbon-14 (e.g. eye lens). Moreover, tissues with high turnover will not contain carbon-14 levels that reflect the nuclear bomb testing spike (e.g. muscles). Using this “carbon-14 bomb pulse method”, Katja figured out where tendons sit on the turnover continuum.5 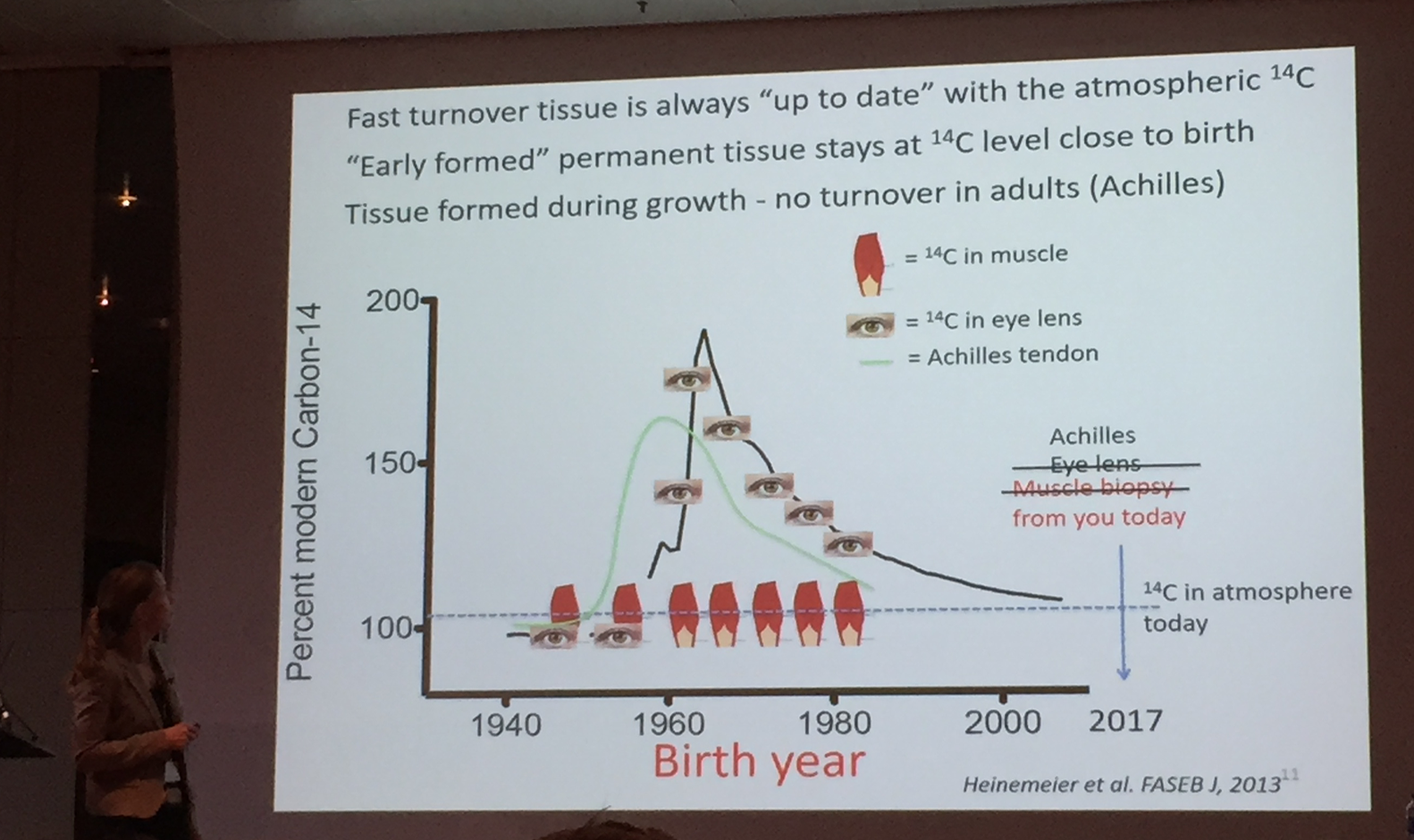 What she found was tendon tissues aren’t quick to turnover like muscles. The collagen in tendons is formed while you are growing and stays with you throughout life. The final conclusion straight from Katja’s slides: “healthy tendon has very limited turnover after its initial formation.” What you’re born with is what you get! So treat your tendons with the respect they deserve. I hope this blew your mind.

And that’s a wrap! Five of my favourite take home messages from Sports Kongres 2018! Before I sign off, I would like to highlight the oral presentations competition. The one and only Kristian Thorborg introduced it as the Wimbledon of sport medicine research – a very high standard! It didn’t disappoint and, in retrospect, was probably my favourite segment of the conference. From a massive field of 140 submitted abstracts (including mine but, whatever, no hard feelings), the top 6 were selected for oral presentations. These were quality presentations but included data that has not been officially published hence I was unable to include them in my top messages. But keep an eye out for:

As a final note, I highly encourage everyone to do two things. The first is sign up for Twitter because it is an amazing way to network and make friends from around the world. It was incredible to meet some of my “Twiends” from all parts of the globe! The second is book your trip to Copenhagen for January 31 to February 2, 2019. Sports Kongres boasts an incredible lineup of brilliant researchers and clinicians and also provides an opportunity to mingle with these bright minds over a Carlsberg (or two… or five). Don’t forget to pack your notebook, your external battery, and (of course) your dancing shoes! 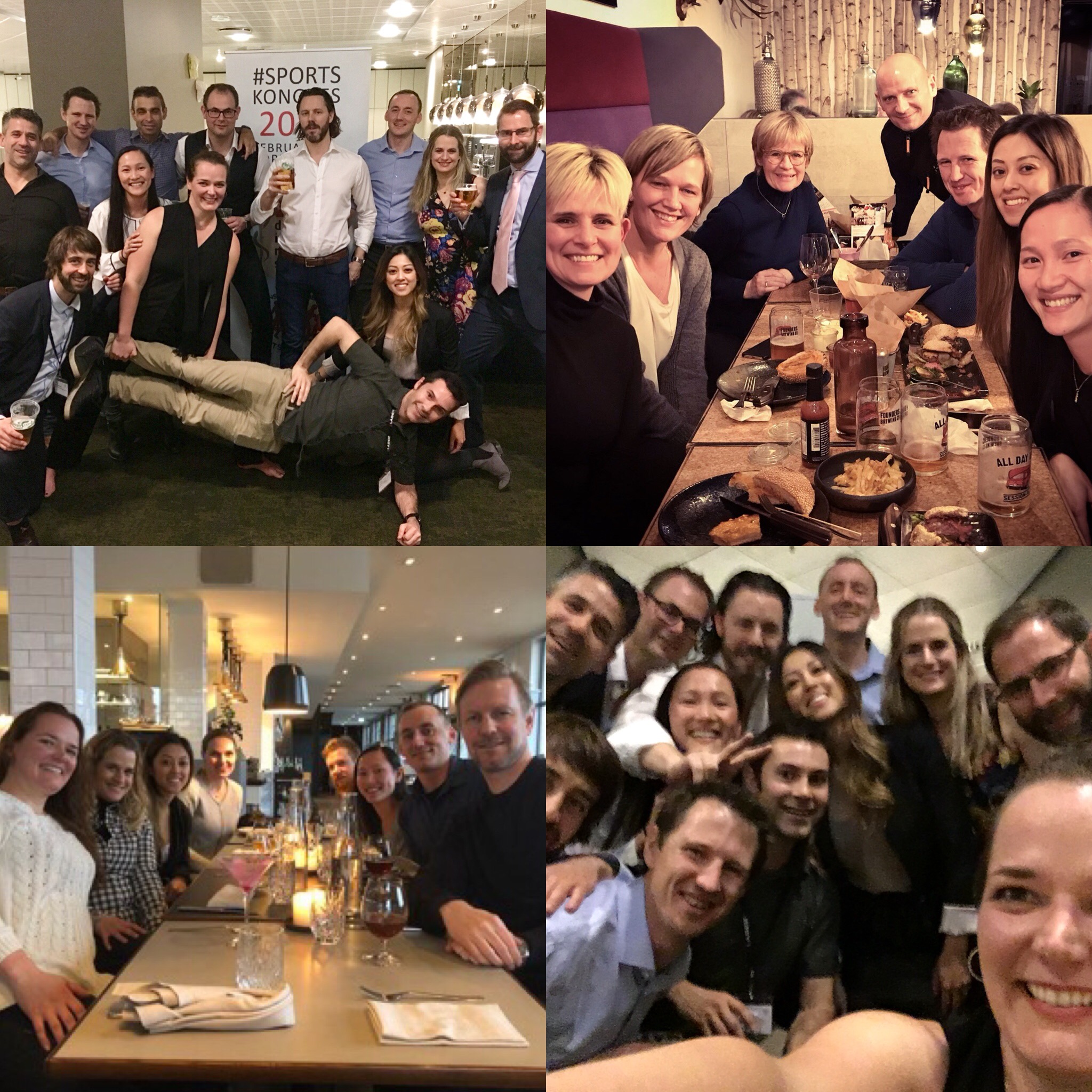 Looks like those few brain cells are shutting down which means it’s time for me to sign off. Thanks for listening, folks! Hope to catch you at a conference soon! 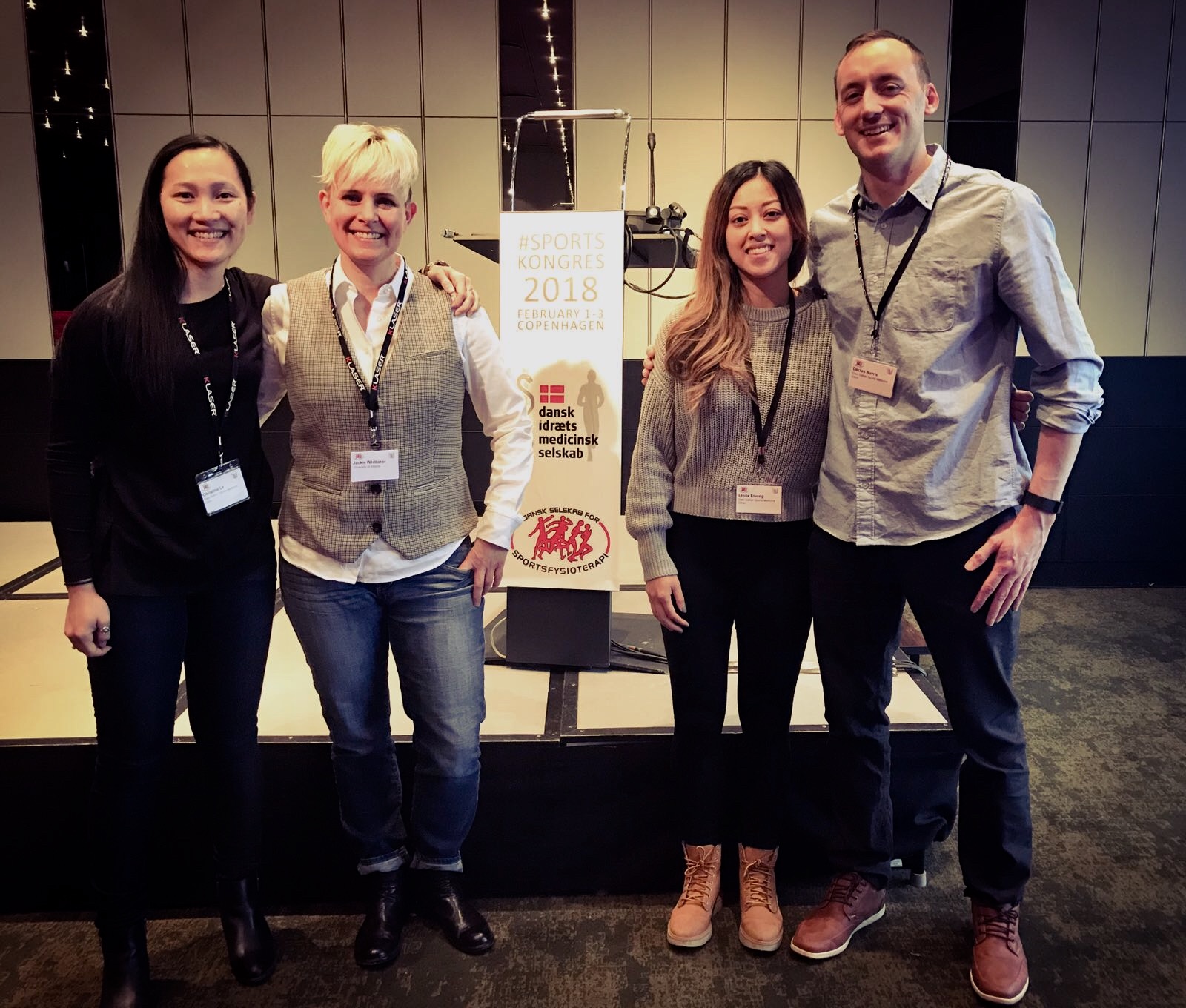 P.S. Shoutout to these beauties from Edmonton (yours truly, Jackie Whittaker, Linda Truong, and Declan Norris). Their wisdom, support, and laughter has helped me get to where I am today.