A Nobel Prize was awarded two weeks ago to researchers who uncovered the molecular mechanisms controlling circadian rhythm: our internal biological clock.

These mechanisms rely on negative feedback loops found in many biological systems where periodicity of gene expression is key, such as the Endocrine system. Internal biological clocks allow for anticipation of the requirements from body systems at different times of the day and the ability to adapt to changes in external lifestyle factors. What is the clinical significance of biochronometers?

The importance of integration of lifestyle factors, such as timing of eating, activity and sleep with our internal biological clocks is revealed in situations of circadian misalignment that lead to suboptimal health and disease states in the longer term.

Consideration of our biochronometers is especially important for athletes in order to synchronise periodised training, nutrition and recovery and thus optimise health and sports performance. 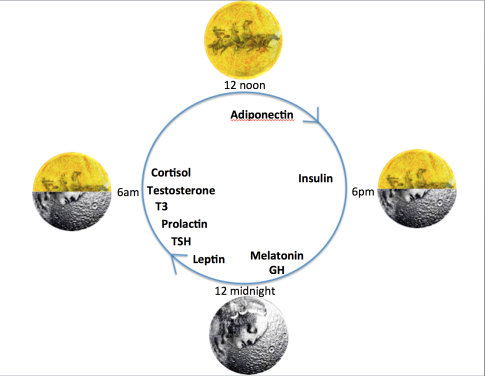 Performance in a cycle time trial was found to be better in the evening, rather than the morning, proposed to be due to a more favourable endogenous hormonal and metabolic internal milieu. Certainly there were some disgruntled swimmers at an international event, when the usual pattern of morning heats and evenings finals was switched, to accommodate television viewing spectators.

Women have an extra layer of endogenous biological periodicity in the form of the menstrual cycle controlled by temporal changes of hormone release in the hypothamalmus-pituitary-ovarian Endocrine axis. Changes in external factors of training load, nutrition and recovery are detected by the neuroendocrine gatekeeper, the hypothalamus, which produces an appropriate change in frequency and amplitude of GnRH (gonadotrophin releasing hormone), which in turn impacts the pulsatility of LH (lutenising hormone) release from the pituitary and hence the phases of the menstrual cycle, in particular ovulation. Even short term reduction of energy availability in eumenorrhoeic female athletes can inhibit LH pulsatility frequency and release of other hormones such as IGF1. Disrupted release of sex steroids and IGF1 has a negative effect on bone turnover: increased resorption and decreased formation. Active females have been found more susceptible to reduction in energy availability impacting bone metabolism than their male counterparts.

Another consequence of the phasic nature of the menstrual cycle relating to external factors such as exercise, is that injury risk could be linked to changes in the expression of receptors for for sex steroids oestrogen and progesterone in skeletal muscle. Certainly during pregnancy and the post partum period, relaxin hormone increases the laxity of soft tissues, such as ligaments, and hence maintenance stretching, rather than seeking to increase flexibility, is recommended to prevent injury.

In order to produce desired temporal adaptive changes in response to exercise training, signalling pathways mediated by reactive oxidative species and inflammatory markers are stimulated in the short term, with supportive Endocrine interactions in the longer term. However, an over-response can impair adaptive changes and impact other biological systems such as the immune system. This maladaptive response could occur as a result of non-integrated periodisation of training, nutrition and recovery in athletes and, in the case of female athletes, oral contraceptive pill use has been implicated, as this effectively imposes a medical menopause, preventing the phasic release of endogenous hormones.

Considering a longer time scale, such as a training season, female athletes were found to have a more significant fall ferritin during than male athletes. Low normal iron does not necessarily correlate to iron deficiency anaemia, but low levels in athletes can impact bone health. Supplementation with vitamin C to improve absorption may help, although iron overload can have deleterious effects. As training intensity increases as the season progresses, six monthly haematological reviews for female athletes were recommended in this study.

Feedback control of the Endocrine system, for example the hypothalamic-pituitary-thyroid axis is dynamic: both anticipatory and adaptive, depending on internal and external inputs. However, presentation of a prolonged stimulus can result in maladaptation in the longer term. For example, disruption of signalling pathways leading to hyperinsulinaemia results in insulin resistance, which represents the underlying pathophysiological mechanism of obesity and the metabolic syndrome. In other words a situation of tachyphylaxis, where prolonged, repeated stimulus over time results in insensitivity to the original stimulus. This also applies to the nature of exercise training over a training season and diets that exclude a major food type: temporal variety is key.

Changes during the lifespan represent an important biochronometer. Premature and small-for-dates babies are at risk of long term metabolic and Endocrine dysfunction, potentially due to intrauterine reprogramming of the hypothalamic-pituitary axis. At the other end of the biological time scale, with advancing age, DNA methylation and changes in epigenetic expression occur. It has been suggested that this age related methylation drift could be delayed with calorie restriction. Melatonin, a key player in intrinsic biological time keeping has been proposed to attenuate bone resorption by reducing relative oxidative stress. This would potentially explain why shift workers with disrupted sleep patterns are reported to be at risk not only of metabolic dysfunction, but also impaired bone health. Disrupted sleep patterns are a concern for athletes, especially those whose training and competition schedule involve frequent international travel across time zones.

In summary, respecting your internal biological clocks and integrating your lifestyle and your training, nutrition and recovery with these intrinsic pacemakers in mind will optimise health and performance.

The Nobel Prize in Physiology or Medicine 2017

Effect of Time of Day on Performance, Hormonal and Metabolic Response during a 1000-M Cycling Time Trial Plos One 2017

Beyond sport: what the sport and exercise medicine community can learn from the life of Archbishop Desmond Tutu

Where are female editors from low-income and middle-income countries? A comprehensive assessment of gender, geographical distribution and countrys income group of editorial boards of top-ranked rehabilitation and sports science journals

Its not all about sprinting: mechanisms of acute hamstring strain injuries in professional male rugby union--a systematic visual video analysis