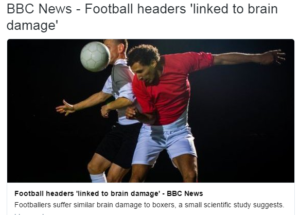 2016 marked the 50-year anniversary of England’s 1966 World Cup win.  However, celebrations were tempered by commentaries on the number of players in the winning squad with dementia, and questions whether football (soccer) heading damaged long-term brain health [1].  This theme continued through 2016, culminating with the Professional Footballers Association calling for a review of the game, specifically whether to follow the lead of United States Soccer and ban heading for younger players [2].

Given these rising concerns, and over 150 years since their introduction, is it indeed time for change in the rules of association football – is there evidence to support current anxieties that football increases risk of dementia, and heading is to blame?

(No) Data on dementia risk in football

Remarkably, despite phenomenal football participation rates globally and centuries of participation, there is little evidence regarding its impact on brain health, beyond anxiogenic anecdotes.  Multiple reviews of the available research literature in this field have drawn the same conclusion: evidence for an association between football and long-term neurological or cognitive deficits is weak, to non-existent [3, 4].  However, a common feature of most research on this topic in football so far has been the recruitment and study of young active footballers; arguably too young to show late cognitive effects.

This limitation was addressed to an extent by a small self-assessment study conducted with former UK professional footballers aged 55 and over, in which 10 of 92 (11%) respondents screened positive for possible mild cognitive impairment, while 2 (2%) met the criteria for possible dementia [5]; figures the authors suggested as consistent with general population expectations.  However, with such a limited sample, absence of a matched control group, and a study methodology open to case selection bias, beyond “more work is required”, no meaningful conclusion can be drawn.

(Confounding) Data on consequences of heading

Research on the specific consequences of football heading is sparse, with one recent small study reporting evidence of short-lived impairment in cognitive and electrophysiological assessments after a single session of heading in young footballers [6].  However, here again, no controls were included and the effects normalised within 24h.  As such, while intriguing, the data provide no insight into long-term consequences of heading.  Indeed, whether this is a consequence of heading, per se, or arises through some other mechanism, remains unanswered.

Regarding late consequences of heading, the data are mixed and limited.  No correlation between heading frequency and performance in neurocognitive assessments is reported in a majority of studies, while the remainder report only a minor influence of heading [4].  However, surprisingly few studies control for the confounding effect of increased numbers of head injuries sustained by those who head more frequently [3].  Intriguingly, an inverse correlation between degree of exposure to heading and MRI measures of cortical thickness in former professional footballers has been reported and, in turn, associated with cognitive performance [7].  However, here again, data are mixed in the few imaging studies to date, with no direct correlation reported in others [3, 4].

There is increased recognition of chronic traumatic encephalopathy (CTE) in non-boxer athletes in a growing list of sports [8], including isolated exemplar cases in former footballers [9].  However, while isolated cases capture headlines, they provide no insight into risk of CTE in a sport, let alone enlightenment on causality.  Notably, there are no validated operational diagnostic criteria for CTE, which still requires autopsy for confirmation [8].  As a consequence, clinical awareness remains low, with exceptionally few suspected cases undergoing autopsy evaluation.  Nevertheless, it remains premature, if not inappropriate, to equate the neuropathological consequences of football to a lifetime of boxing based on isolated cases.

Work to do before rule change is informed

By current evidence, therefore, it would seem concerns and anxieties around participation in football, specifically the act of heading the ball, and risk of dementia may be premature, if not misplaced.  Nevertheless, it must be acknowledged there is growing public anxiety around the consequences of exposure to brain injury in sport, in part fuelled by increasing recognition of CTE in former athletes, including former footballers.

However, in reality, there are remarkably few robust and enlightening data on the long term neuropsychological health of former footballers, or on the lasting consequences of football heading, with much of the research to date beset by methodological deficiencies.  So, while current evidence does not demand rule change, neither does it provide football with a clean bill of health.  Instead, to inform discussions and assuage anxieties, there is a pressing need for appropriately designed and powered research studies to address questions over dementia risk in former footballers and any long-term consequences of heading.  Until then, recommendations on heading in association football can be driven only by opinion, not by scientific evidence.