In just the 8th minute of the final between Portugal and France (hosts of the UEFA Euro 2016), Portugal’s star player and 3-time winner of Ballon d’Or, with jersey number 7, Cristiano Ronaldo @Cristiano, was tackled and suffered an apparent MCL injury of his left knee. Partial and total tears of the MCL occur usually as a consequence of direct contact and MCL injury is the most frequent knee injury in professional players as previously shown by us in the so-called UEFA elite Club Injury Study (http://bjsm.bmj.com/content/47/12/759.abstract).1

Interestingly, the incident of #CR7 resulted in instant interest in different social media (#SoMe) fora, including Twitter. For example, we were immediately able to see pictures and videoclips of the injury event. There were numerous speculations about the extent of his injury. I posted a couple of tweets myself including one about the possible injury mechanism.

My tweet was rapidly (and surprisingly) shared directly and indirectly by many people –before the match had even finished. In the week after the final, it was re-tweeted more than 700 times and watched more than 121,500 times. 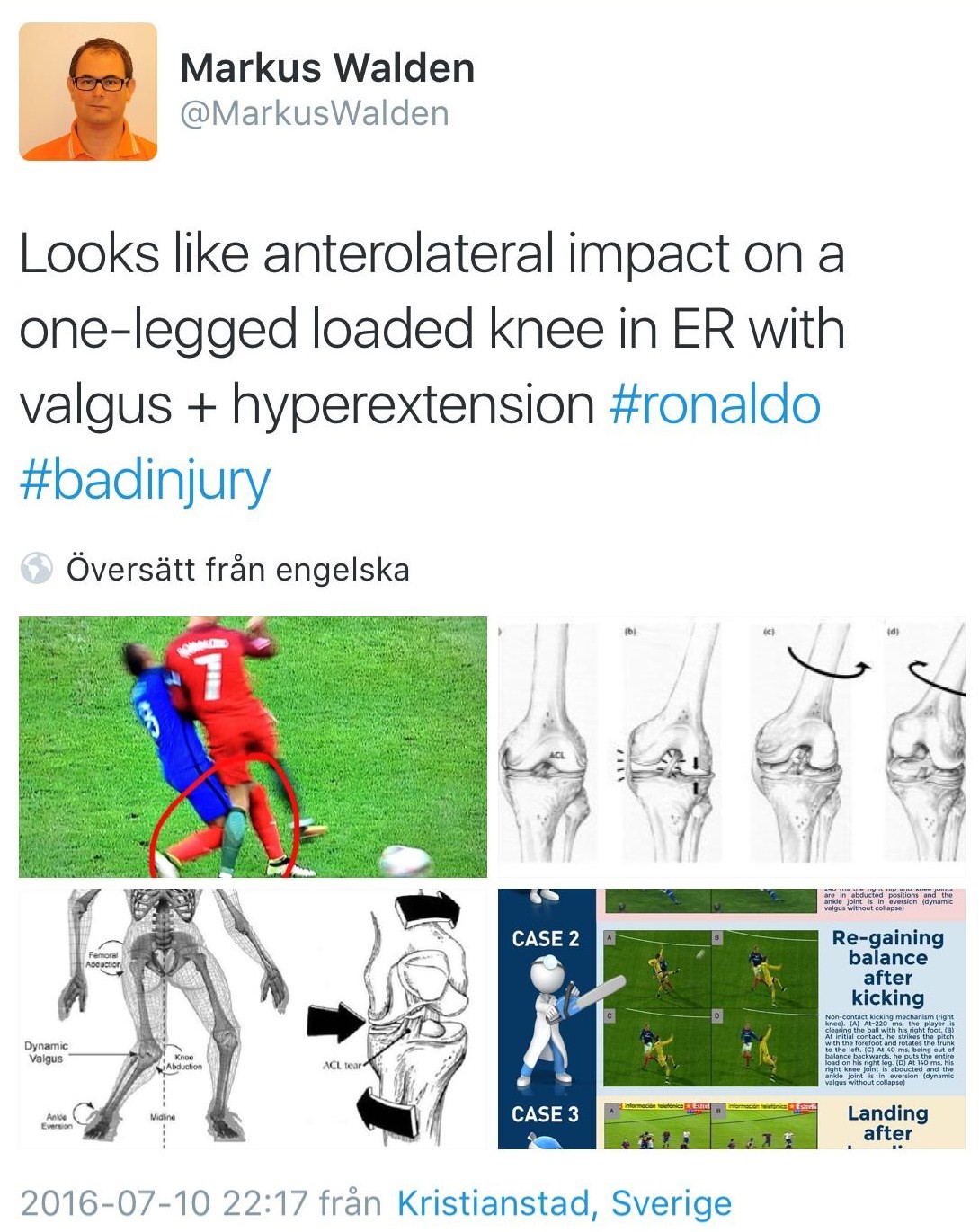 So, what can we learn from this?

First, I must admit that I had not – until now – really realized the cascading impact of #SoMe even if I use Twitter professionally on a daily basis. Obviously, with these figures the potential for information, promotion, knowledge dissemination and other educational activities is enormous (See: How BJSM embraces the power of social media to disseminate research).2 All in all, #SoMe as a natural source of interaction and knowledge transfer for medical practitioners, journals, congresses and stakeholders, etc. in sports medicine are probably under-utilised in broader terms even if many nice exceptions exist. It will be interesting to see how its use develops over the next few years.

Second, when watching the incident frame-by-frame back and forth, it is quite clear that the injury mechanism could have resulted in more than “just an MCL” injury. For example, it is well-known that very little valgus is actually needed to tear the ACL if there is concomitant tibial rotation. In #CR7’s injury there was a knee-to-knee clash with anterolateral impact on his left knee with the tibia in external rotation. The knee then moved inwards (= valgus) and into extension, but probably without any significant internal rotation and no hyperextension. Interestingly, one of the six direct contact ACL injuries in our systematic video analysis study (http://bjsm.bmj.com/content/47/12/759.abstract (OPEN ACCESS)),3 had exactly this injury mechanism except for the externally rotated tibia before the clash. It could thus be speculated that the absence of internal rotation probably saved his ACL, since internal rotation has been shown to be deleterious for the ACL with concomitant knee valgus.4

So, why did he go back to the pitch twice?

We know from the concussion experiences of the World Cup in 2014 that the medical team, sitting on the bench far from the action, often has difficulties in seeing what really happens on the pitch during the injury incident. We also know that the players are pumped up with adrenaline and that they always want to continue playing; in the case of #CR7, the immediate clinical impression was a simple knee contusion. A similar 3-minute stop by the referee, as recently decided on by FIFA and UEFA for the evaluation of head injuries, to let the medical team watch the replays. This strategy is to assist the medical-teams decision making, and protect player welfare, by taking the player off before he can continue playing with serious injury. This issue was recently thoroughly argued for by Dr. Andrew Massey in another BJSM blog and I can from a medical perspective support his idea.

So, what is the take-away?

The knee injury of #CR7 drew much attention on Twitter which illustrates the power of #SoMe for communication and message sharing in the sports medicine community. I encourage those of you who not yet have created accounts to do so. In addition, it seems that the injury was “just an MCL”, but the injury mechanism initially suggested that other intra-articular structures may have also been damaged. Fortunately, this was not the case and we can therefore welcome #CR7 back to the pitch already within a couple of weeks.

Markus Waldén @MarkusWalden, MD, PhD, is an orthopaedic surgeon, football doctor, and a member of the Football Research Group in Linköping, Sweden.

Consent was obtained from Dr. Jesus Enrique Olmo Navas of Real Madrid CF to report on the injury mechanism of #CR7’s knee injury as has been done in the current blog.