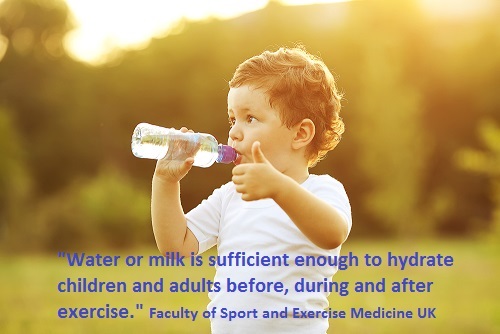 Regular consumption of sports drinks by children, for social reasons, could be having a detrimental effect on their health concludes the Faculty of Sport and Exercise Medicine (FSEM) UK. A survey by Cardiff University School of Dentistry[i], published in the British Dental Journal, showed a high proportion of 12-14 year olds are regularly consuming, high sugar, sports drinks unnecessarily:

The survey looked at 160 children in four schools across South Wales and uncovers that children are attracted to sports drinks because of their sweet taste, low price and availability.  The research highlights the fact that parents and children are not aware that sports drinks are not intended for consumption by children. The FSEM recommends that water and milk is sufficient enough to hydrate children and adults before during and after exercise, there is no evidence of beneficial effects of sports drinks in non-elite athletes or children. However, there is evidence that an increasing consumption of sugar sweetened drinks in the UK increases cardiometabolic risks[ii] and contributes to tooth decay.

Half of the children surveyed claimed to drink them socially and most (80%) purchased sports drinks in local shops, whilst 90% claimed that taste was a factor and only (18%) claiming to drink them because of the perceived performance enhancing effect. The FSEM is calling for tighter regulation around the, price, availability and marketing of sports drinks to children, especially surrounding the school area, to safeguard general and dental health:

Dr Paul D Jackson, President of the FSEM UK comments: “The proportion of children in this study who consume high carbohydrate drinks, which are designed for sport, in a recreational non-sporting context is of concern.

“Sports drinks are intended for athletes taking part in endurance and intense sporting events, they are also connected with tooth decay in athletes[iii] and should be used following the advice of dental and healthcare teams dedicated to looking after athletes. Water or milk is sufficient enough to hydrate active children, high sugar sports drinks are unnecessary for children and most adults.”

Russ Ladwa, chair of the British Dental Association’s Health and Science Committee said: “The rise of sports drinks as just another soft drink option among children is a real cause for concern, and both parents and government must take note. They are laden with acids and sugars, and could be behind the decay problems we’re now seeing among top footballers[iv].

“Sports drinks are rarely a healthy choice, and marketing them to the general population, and young people in particular, is grossly irresponsible. Elite athletes might have reason to use them, but for almost everyone else they represent a real risk to both their oral and their general health.”

The FSEM is concerned about an increasing UK trend for the consumption of sports drinks[v] and this schools survey uncovers social reasons, availability and price as having a large influencing factor. Price was one of the top three recorded reasons for purchase and, of particular concern, 26% of children also cited leisure centres as purchase sources.

The survey also addresses the fact that there is particular confusion over the definition of a sports versus an energy drink. However from a dental and wider health perspective, these two drinks have similar detrimental effects due to their high sugar content and low pH.

In supermarkets and shops, sports drinks are sold alongside other sugar sweetened beverages. This is misleading children and parents by indicating that they are meant for use by everyone.