“We can’t win like everyone else, we have to do something different” 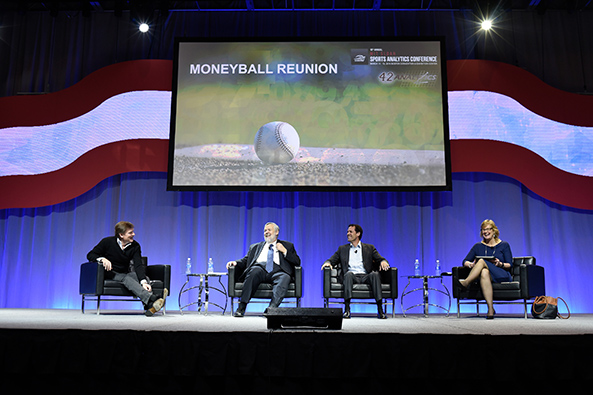 Those are the words of Dr David Martin, Director of Performance and Research at the Philadelphia 76ers, who featured on the Sport Science panel at the 2016 MIT Sloan Sports Analytics Conference (SSAC). The sentiment related to the 76ers’ current struggle for improvement from last position on the NBA Eastern Conference ladder, but it could easily represent what the conference as a whole stands for; the continuous search for an edge in the cut-throat industry of elite sport.

Ten years into its existence, the influence of SSAC permeates American sports. Take Daryl Morey for example, a computer science graduate and co-founder of the conference, who has been appointed General Manager of the Houston Rockets and has earned plaudits for his use of analytics to drive improvement in the Rockets’ performance and recruitment. The traditional focus of the conference has been on this ‘Moneyball’ approach to player recruitment, or in real terms: “looking for players whose surface appearance is deceiving the market place about their value”. However, with the recent success of teams such as the Golden State Warriors, who have pioneered the strategic sleep and rest of players, there has been a palpable shift towards exploring the use of analytics in optimising athlete health and preventing injuries.

With that in mind, here are some insights from the 2016 Conference which may be of use to the sports medicine community:

The Impact of Injury

Those in sports medicine often quote the financial impact of injury to demonstrate their value, and it’s difficult to argue against them. In US sports alone, $700 million per season is lost in injured player salaries in Major League Baseball, $358 million in the NBA, while NFL starters miss 1600 games a season through injury. This monetary incentive to prevent injury is now coupled with an emerging wealth of research examining the effect of injury on overall team performance- Hagglund et al’s UEFA Champions League study being a classic example.

One of the most interesting research presentations at the conference applied advanced machine learning techniques to predict the probability of injury for an NBA player. The researchers presented a model that offered a quantitative and systematic approach to injury prevention which allowed teams to forecast the likelihood that any given player will succumb to injury during the course of an upcoming game. Applying this model successfully to other sports will be game-changing.

Ray Hensberger of Booz Allen Hamilton sought to know how an injury to one player may directly affect the on-field performance of another. To illustrate his point he referred to the Baltimore Ravens’ linebacker combination of Elvis Dumervil and Terrell Suggs. In 2014, Suggs (12) and Dumervil (17) led the number of sacks in the NFL with a combined total of 29. However, following a season-ending injury to Suggs in week 1, Dumervil only managed 6 sacks for the entire 2015 season. Of course there are many confounding factors in this, but it makes for an intriguing line of research. To consider an example closer to home, when Leicester City’s N’Golo Kanté touches the ball in the middle or back of the pitch, shots on the subsequent attack are 70% likelier to yield a goal than when he isn’t involved– how might an injury to his ever-present midfield partner Danny Drinkwater affect this (and Leicester’s chances of securing the Premier League)? Answers to these questions may contribute to a greater understanding of the fascinating concept of team cohesion and winning.

But are all injuries bad? The cliché injury is an opportunity to get better is well worn, but there is anecdotal evidence pointing to its truth. Hensberger used the story of San Antonio Spurs’ Kawhi Leonard who used his time injured to develop into an all-round better athlete, while an article in ESPN Magazine’s Analytics Edition suggested that for the Golden State Warriors: “A Steph Curry who has never injured his ankles would be less preferable than the Steph Curry we actually have today”. It bodes the question, is the experience of overcoming injury key to developing the resilience of a champion? Would Jonny Wilkinson have kicked Toulon to back-to-back European Cups in the twilight of his career if he hadn’t spent several seasons before in the rehab room?

Perhaps the impact of player availability can be summed up by the vignette offered by Andy Glockner, author of Chasing Perfection, who spoke at the conference. While researching for his book, Glockner asked Keke Lyles, Director of Performance at the Golden State Warriors: “If you could guarantee Andre Iguodala was available for 75 games this season, would anything else matter?”Lyles responded with an emphatic “No”. That season, Iguodala played in 77 games and the Golden State Warriors were crowned champions.

Biometrics – The Next and Biggest Analytics Frontier?

During his talk, Glockner argued that the use of biometry represents the most significant opportunity for teams to gain an edge over their competitors. Biometrics refers to biological data which may be important for keeping an athlete healthy. Examples include the data input into personal apps by athletes (including sleep quality, soreness etc) and those collected by global positioning systems (including indicators of workload). Glockner proposed that figuring out which data is most helpful in predicting injury will be a major discussion point in the future. In light of this revelation, recent research published in the British Journal of Sports Medicine cites the acute: chronic workload ratio as a strong predictor of subsequent injury.

Big data collecting systems are now essentially ubiquitous in professional sport but as Brian Kopp of Catapult Sports suggests, “the advantage is never going to be merely in having access to the data. It will be in what you do with it”. With such widespread data available, there has inevitably been inappropriate use of technology in sport. Stephen Smith, founder and CEO of Kitman Labs, feels that the availability of such data has wrongly led to a tendency to hold athletes back – stating during the Sport Science panel at SSAC that: “Every time we hold an athlete back we limit their potential. It shouldn’t automatically be ‘we should stop the athlete from participating’, instead we should consider how else we can train and treat them, how can we do something incredibly intelligent with the data to improve the outcome”.

In sports such as basketball, with multiple games in quick succession, and large amounts of time spent on airplanes, it’s easy to see how biometrics can provide an advantage. It was reported during the conference that basket-ballers lose up to 25% of their flexibility at the end of each game, and often have to jump straight on a flight traveling across time zones which limits their opportunity to recover. Add to that the risk of being tall and flying frequently, and you have a recipe for illness and injury.

Despite the promise of expensive technology and sophisticated analytics, a recurring theme throughout the conference was the importance of good communication. The information gleaned from big data is irrelevant if it can’t be presented to coaches and athletes in a way that is understandable and specific to them (“coach speak”). This topic was touched on during the Soccer Analytics panel where it was suggested that footballers tend to be visual learners, and that insights should be packaged in a style that reflects this.

Conferences such as SSAC are inspiring days out, never lacking in insightful soundbites. But the cynic in me often wonders if in an industry as ruthless and secretive as sport, if what’s really worth knowing is not being told.

Nevertheless, it appears that we’re living in an exciting time for sports medicine with the impact analytics can have on protecting athlete health and extending sporting careers. With this in mind, we return to Daryl Morey, the man who started SSAC. During a panel session he was asked which profession he feels will play an increasingly important role in the front office of sporting organisations in the future. His response? Doctors.

Sean Carmody (@seancarmody1) is a junior doctor working in the South Thames Deanery.