I’ve recently made the move from the clinical environment into academia (whilst still getting the occasional clinical fix when I can). Part of this move was to set up some new MSc modules at the University of Brighton. The way we wanted this to run was based on facilitating discussion rather than me standing up and banging on about what I would do in different situations – no-one is going to enroll for that! But for this to work, it relies on people feeling comfortable talking about their own practice, something that surprisingly, people are very reluctant to do. People seem very uncomfortable disclosing what they do and how they do it, especially when surrounded by peers.

A while back I read a blog re-tweeted by IFL Sciences (@IFLScience) about how a disagreement is different to an argument. Now rather than me ineloquently blurring these definitions and confusing you more, why not allow the genius of Monty Python to explain.. Please watch this brief 3 min video (here) for the rest of the blog to make sense.

The original clip goes on a bit longer and in true python fashion, gets stupider. But this clip can translate into our practice. It is perfectly reasonable and healthy to argue. We are not going to learn from each other by accepting that that other guy sat in the room, who has more experience than me, treated his ankle sprain using those exercises, so that’s what I should do.

No! Why? We should be asking “Why those exercises for that individual?”

There are many roads to Derby: 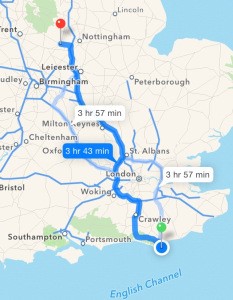 A completely random destination (just so happened to be one of the cities I can spell). But this image sums up what I think about clinical reasoning. It also demonstrates what I encourage our students to accept when questioned about their practice. This applies to undergraduate students going on placement or masters students discussing case studies in tutorials or equally, qualified clinicians discussing practice over a coffee in the staff room.

Let me explain. Most of us have at some point ignored the sat-nav, right? Intentionally or not. But it simply re-routes and will eventually lead you to your destination. The same with rehabilitation & treatment. We may all have the same goal & end point, but how we get there is different. The route we chose depends on many factors.

Letting the sat-nav make the decision:

For a relatively less experienced clinician, the situation may be this:

“I’ve only ever been to Derby once, but when I did go, that route worked pretty well for me, so I’m going for it again. Why risk it.”

This is the equivalent of following a departmental protocol or being led by a more experienced clinician. Perfectly legitimate but after a time the question will become, “have you tried other ways?” Yes that’s a pretty direct route, but sometimes it’s not about the speed you get there. An example I can think of was a player with a partial ACL injury that occurred just before Christmas. My strength & conditioning colleague and I made the decision to prolong his rehab until the pre-season, despite realistically being able to get him fit for the last 2 games of the season. But there was no advantage to that, the games weren’t key to league position or a must win final. Instead we were able to focus more on smaller details, enhance his “robustness” and ultimately, we had no re-injuries with him the following season. We decided to take the more scenic route and enjoy the drive. Sometimes, it shouldn’t be other people asking why you have done something, but yourself (do this internally, arguing with yourself in a cubicle at work could have very different consequences to the intended career development).

Thanks Sat-Nav, but no thanks:

This option comes after you have driven to & from Derby a few times. Or if you insist on keeping it relevant to practice, an exposure to a certain injury within a set population. Experience may tell you that the route suggested by Sat-Nav has an “average-speed check” of 50 mph for 25 miles, so you may choose one of the alternate routes. This is the same as saying, “I wanted to use squats for his knee rehab, but it aggravates his hip so instead I used dead-lifts.” Someone has asked you why you went that route, the answer is reasoned and justified and neither party needs to be offended. But you have argued your point.

An argument is different to a disagreement:

An example of this not being constructive may be:

“I prefer this route because the services have a Costa Coffee and not Starbucks. I hate Starbucks.” This opinion, without any justification may turn into a disagreement. “I don’t ever use a wobble cushion in my rehab, just don’t believe in them.” A genuine statement that I heard years back when I was studying myself. There was no rationale and every counter argument was met with “Nope. Don’t buy it.”

This is a disagreement. Something I disagree with… Oh, balls.

An argument doesn’t have to be raised voices or expletives. It can be someone wanting to develop their own thinking and reasoning, therefore probing your experience – “But WHY did you chose that? (subtext = help me learn!)”

Equally it can be someone pushing you to develop. “You use that exercise for all of your patients.. why?” (“Come on, push yourself a bit more. Get out of that comfort zone”)

I’ve started to do a little presentation at the start of our modules to explain this thinking, I will be asking “why?” A lot, but I don’t want people retreating or getting defensive. Asking “why” is not a sign that I disagree with you. Arguing is not a sign that I disagree with you. If you feel comfortable with those concepts, you have either done an MSc already, or you are ready to do one! For those not on twitter, firstly – how are you reading this blog? Secondly, get on there. There are prime examples of arguments about clinical practice everyday and very quickly, normal jovial exchanges are resumed (I would highly commend Tom Goom (@tomgoom) for this attribute). But also, it is a good place to observe some people misunderstanding an argument and presuming it is a disagreement (I won’t name people, I don’t want to get in a disagreement).

Sam is a senior lecturer in physiotherapy at the University of Brighton, working on both the undergraduate BSc program and the post-graduate MSc Sports Injury Management. He is also the ACPSEM regional representative for the south east & conference director of the upcoming “Young Athlete” conference in Brighton, 9-10th October.