Claire Roche, Emergency and Sports Medicine Physician from the Gold Coast Hospital, Australia shares her experiences from the Billabong Pro 2014 in Teahupoo, Tahiti. Billabong Pro is one of the world’s “heaviest big wave” professional surfing competitions. 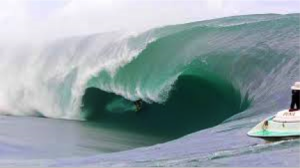 Teahupoo, a small village at “the end of the road” on the island of Tahiti, buried deep in the heart of French Polynesia, translated from Tahitian means; wall of skulls, which is a story of its own. This magical village with views like that of a picture postcard is the home to one of the worlds’ most unforgiving surf breaks. Known amongst surfers as “chopes”, Teahupoo is a wave which achieves up to 25 feet on large swells breaking onto a razor sharp reef where spectators could stand in knee deep water less than 50 metres away if they wish. If the surfer makes “the drop” they will have a ride of a lifetime – inside a tube of aggressive energy and power only the wave of teahupoo is capable of producing. Alternatively one moment of hesitation will result in death or severe injury, sadly, of which there are many stories.

Teahupoo is the home of one of the main events on the world surfing tour, The Billabong Pro. Large surfs were predicted for the competition this year and this event was going to run in some of the biggest surf that the event had seen over the last 10 years. One sentence remains in my mind from our first ASP meeting with event organisers and that was:

”A winner is to be crowned and a winner has to have no fear of paddling into and descending the face of a 12-15ft wave, this will split the worlds’ top 40 surfers as this takes a certain personality to achieve”. 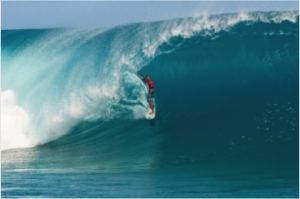 So, what is the surfer’s aim? It’s to ride perfectly into a tube, deep enough so the surfboard is invisible and then, to be driven out in an explosion of spray. This would earn a high score and a roar from the crowd of dare devil boats strategically positioned in the channel to have the closest possible view of the perfect wave. Yes, really, rogue waves have pitched a little earlier than expected and pulled spectators “over the falls.”

The medical team and centre

As the Emergency Physician for this incredible event, preparation for any event is paramount. The medical team for this event consisted of :

Our medical centre for the event consisted of a 20ft by 10ft wooden hut with one bed located on the shore 200 metres from the surf break which in the code red year 2011 was actually pushed back several metres by the incredible swell. This caused the Billabong pro to go on hold and attracted the big wave surfers from all over the world to jump on last minute flights to Tahiti. Working closely with the Tahitian water patrol, practice runs would retrieve a surfer from the impact zone to medical attention within 2 minutes. The first days of our arrival in Tahiti were spent practicing with water patrol cervical spine protection on the back of a jet ski and safe transfer onto a spinal board at the shore. 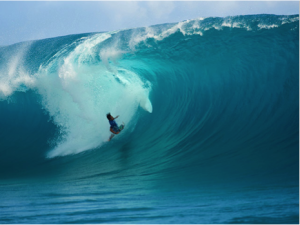 Within four hours of the competition start, our preparation was put into practice. Local wildcard Tumatar Puhetini fell awkwardly from a 12ft plus wave, was held under for most of a set and arose from the 6ft white wash obtunded with thoracic back pain, bleeding from his occiput. Sadly he was the first of many competetors to take unforgiving falls into the reef. Rapid transfer for stabilisation with ABC preparation inside the medical hut, oxygen and a fully prepared intubation table with ALS algorhythms between posters of the surf made what appears to be a primitive tent actually, as the online surfing magazine, surfline described a small Teahupoo ER. Stabilisation in the medical area and then transfer to the local hospital for imaging occurred. Fortunately, several hours later after undergoing imaging of his thoracic spine, Tumatae was home.

The competition this year got off to a sombre start after a local trialist Kevin Bourez (brother of Michel Bourez currently ranked world number 3) took a bad fall head first into the reef resulting in a subdural haematoma, mandible fracture, orbital fractures, maxillary fractures and a ruptured globe. After multiple surgeries and an ICU stay in the capital, Papeete, Kevin was discharged with a good prognosis. Still, the story reiterates the unforgiving nature of a wave where one moment of hesitation or one foot not positioned perfectly on the board can have life changing repercussions. Teahupoo to date has claimed three lives, left several with life changing spinal injury and has scarred many. 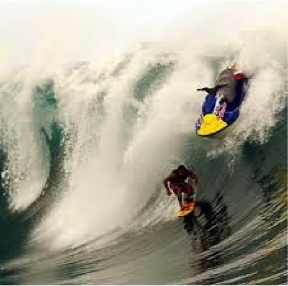 To provide medical cover for such an event requires preparation for several scenarios, we cover all the entourage travelling with the surf tour (up to 200 people living with local families in crowded dwellings). This entails journeys to give IV fluids and supportive treatments to members of staff struck down by ailments such as influenza, gastroenteritis and tropical disease such as dengue fever whilst also keeping in mind other endemic problems to the area such as leptospirosis which hold high mortalities if missed. Often people surf out of hours in groups and a rogue wave often takes out several of the group, the sea of boats all hoping to get a close up glimpse and photo of the surfers are easily pulled into the suck down of the wave. This sequence of events can produce a major incident of multiple casualties in a region with only minimal medical personnel. It disturbed me how children in nappies were in boats watching this unpredictable wave with no life jacket; a lady breast feeds a neonate in a boat in between heats; boats knocked into each other trying to get to the best spot to view the surfers rides. Then there is the surfer who is desperate to get that 10 point ride with adrenaline pushing him to go for a wave that would seem unmakable.

Paramount in this situation is a major disaster plan. Rapid triage of patients to different areas, control of media and press, security assistance, and a close relationship with local medical and emergency services to aid an evacuation plan are all necessary. 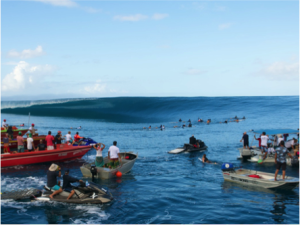 Surely this is what an Emergency Physician thrives on?

But, the scenarios we talk of are all the same as what we deal with in our place of work: ABC, major disaster plans, evacuations, rapport between team members will always give the best outcome in what can seem bedlam. It is an honour to work in such an environment and an honour to care for those who risk their lives for the perfect wave.