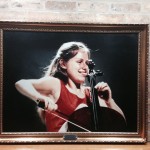 The Jacqueline du Pré Music Building at St. Hilda’s College in Oxford is a very fitting venue for the 3rd International Scientific Tendinopathy Symposium. It’s a stone’s throw away from the Iffley Road track where Sir Roger Bannister broke the four-minute  60 years ago. For 800 years Oxford has led innovation and scientific rigor. In 1214, Roger Bacon taught at Oxford and “was instrumental in setting science on the path towards modernity, as an inductive study of nature, based on and tested by experiment”. (1) He developed the principles of experimental science in his Opus Majus, an encyclopaedia of current knowledge of the natural world completed in 1266.

This 3rd International Tendinopathy Symposium (#Tendons2014) links scientists and clinicians. This is not a new idea. Thomas Sydenham (1624 – 1689),  an Oxford-based physician and one of the fathers of the science of epidemiology, influenced medical teaching in Britain for centuries. He was a “champion of bedside experience” and believed “that medical progress could best be achieved by discarding the trappings of preconceived hypotheses…”(1)

Thus, bridging theory and practice is a tradition on the banks of the River Thames in Oxford; yesterday’s first day of #Tendons2014 provided a healthy dose of translational and basic science as well as clinical practice pearls.

Top 5 flavours of the day:

1. Tendon loading, tendon structure and tendon pain… with terms like ‘overuse’, ‘normal loading’ and ‘abnormal loading’ featured in numerous talks and discussions. What causes the pain? Is there abnormal neural ingrowth into the tendon proper and if so what is the clinical relevance? Abnormal loading / overuse cause hypoxia, heat shock and apoptosis resulting in tendinopathy though complex and highly individual cell mediated reactions.

Appropriate loading results in healthy tendon adaptation via mechanotransduction/mechantherapy. What constitutes normal and abnormal load remains very complex and highly individual. What is quite clear is that appropriate loading stimulates healthy cell reaction, (including Tendon Stem Cell (TSC) differentiation into tenocytes) and tendon adaptation. Good evidence exists to suggest that the normal part of the tendon reacts to loading and grows to support the abnormal / tendinopathic part – ‘It’s about the donut, not the hole’ – Craig Purdam

2. I was surprise by the number of speakers still using the word ‘inflammation’ without clearly defining what they mean by it or necessarily understanding its role in clinical practice. There is no conclusive evidence that inflammation play a key role in tendinopathy and I haven’t heard anything today to convince me otherwise. (For more on this see Rees, Stride & Scott here)

3. Ultrasound Tissue Characterisation (UTC) was the topic of a number of oral and poster presentations. UTC is a novel imaging modality reporting 4 different echotypes representing different qualities of tendon structure. It is an interesting tool but with limited clinical application at the moment with certainly no link between pain and UTC structure.

4. Genetic researchers conclude that genetic testing has little or no role in identifying talent. With respect to injury, it should be used cautiously as part of the many factors influencing (i) (tendon) injury risk and (ii) an individual’s response to training. Finally, genetic testing should never be direct to the consumer (DTC) but always through appropriately qualified clinicians or geneticists. (@MCollinsSA but not active on twitter yet!).  (Editor – a top link on genes in sport broadly is @DavidEpstein podcast here)

5. The lid has been lifted from the ‘Plantaris tendon pot’… but still a lot of steam fogging the glasses… Note that of some of the ‘champions of bedside (trackside!) experience’ like Noel Pollock (@DrNoelPollock), Toby Smith, Lorenzo Masci and Hakan Alfredson are firm believers. Abberant (?) plantaris insertion complicating Achilles tendinopathy is certainly a real entity in elite Track and Field. Also, isolated plantaris tendinopathy might trigger a medial mid-portion Achilles Tendinopathy (perhaps irrespective of its distal insertion anatomy). Scraping of the ventral surface of the Achilles tendon and excision of the plantaris tendon remains one of the most prevalent surgical procedures in the British elite Track and Field cohort. Clearly the treatment approach remains speculative (no RCTs) but a clinical pearl is to put plantaris tendinopathy in your differential diagnosis when ‘straightforward midportion Achilles tendinopathy’ is not responding to appropriate Rx.

PS: The ‘donut’ refers to the apparent ‘hole’ within the donut which represents tendinopathy on an ultrasound scan. Of course there is no ‘hole’ in reality. The  ‘donut’ itself represents the tendon tissue surrounding the ‘hole’. Tomorrow’s blog will reveal the significance of female tenocytes…

It is often “the simple, telling experiment” that provides the catalyst for substantial change in thinking and practice. On the 25th May 1940 Norman Heatley gave eight mice a lethal dose of streptococci bacteria – four of the eight were then given penicillin and they survived. In 1990 Heatley, a biochemist, became the first non-medic in the 800-year history of the University of Oxford to be awarded an honorary doctorate of medicine. (1)

There has been a lot of development in tendon science and the clinical practice application. We still lack ‘the simple, telling, tendon experiment’ though… I’m already looking forward to the 4th Symposium! Who knows…

@DrPaulDijkstra is an Associate Editor of BJSM, a regular guest blogger and sports physician at Aspetar, Qatar Orthopaedic and Sports Medicine Clinic. He served TeamGB at the 2008 and 2012 Olympic Games and TeamEngland at the Commonwealth Games in Glasgow in July-August.

Educate, involve and collaborate: three strategies for clinicians to empower athletes during return to sport

Can we do better? Towards a child-centred approach in the rehabilitation of paediatric sport injuries

Benefits outweigh the risks: a consensus statement on the risks of physical activity for people living with long-term conditions

Effectiveness of treatments for acute and subacute mechanical non-specific low back pain: a systematic review with network meta-analysis