Ever since Novak Djokovic wrote his book “Serve to Win”, a hot debate surrounds tennis players diets. Should they all eat gluten-free foods? Will that bring them instant fame and fortune?

In his book, Djokovic describes his diagnosis of a strong intolerance for wheat and dairy, and a mild sensitivity to tomatoes. Cutting out gluten from his diet resolved his gastrointestinal complaints, his asthma symptoms (possibly the so called “baker’s asthma”?) and restored his energy levels. While reviewing literature to write this blog, I was actually surprised to read that sensitivity to wheat in the general population (assessed by IgE) is around 1% (Fasano 2003). This percentage is much higher than I remembered from my textbooks (0.01%). So if a player has vague gastro-intestinal symptoms that you can’t pin down, it may well be useful to test for gluten sensitivity. However, we may assume that the current rush by tennis players to embrace a gluten-free diet is not based on a tidal wave of positive jejunal biopsies! 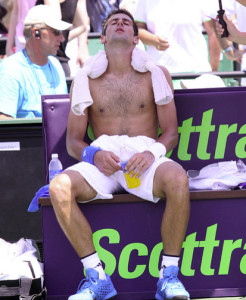 In his book, Djokovic touches on a number of issues worth copying. They are useful tips for anyone, not just tennis players. If you ignore the more eccentric parts, it is actually good sport science (Rodriguez 2009). He places an emphasis on a good, healthy breakfast with plenty of carbohydrates with a low glycemic index – the ones that take a bit longer to digest. This means that he will not simply eat “empty” carbohydrates, but that his breakfast will include fruits, nuts, seeds, grains and quinoa (full of fibre, vitamins, minerals, and other micronutrients).

He likes a protein drink after play and recommends proteins (white meat and fish) and vegetables in the evenings, to enhance recovery. I would personally recommend that you throw some carbs in there as well, to restore the depleted glycogen stores of the muscles and liver; weight gain will not be an issue if you have another heavy work out scheduled for the next day! Timing the protein intake (during and immediately after exercise and at night) is something that has gained more credibility lately for adequate muscle restoration and buildup.

When it comes to drinks, Djokovic does not seem to have a single preference. He recommends water in the morning, energy drinks with fructose and hydration drinks during workouts, and protein drinks after play. Professional tennis players usually drink both water and sports drinks during a match. Other players have their own particular preferences and you can see Rafael Nadal shouting out for his recuperation drink on YouTube (see https://www.youtube.com/watch?v=twL0bz6saqs). Players should always start a match well hydrated, and drink enough during a match to balance fluid losses. The advantage of tennis is that players have ample opportunity to drink during changeovers. This is in contrast to football, for example, where extra drinking opportunities had to be created during the World Cup. Tennis players can take a few sips every time they change ends and simply drink to thirst, without the need to force fluid intake. In addition to water, sports beverages also contain the carbohydrates and electrolytes that are recommended to help maintain blood glucose concentration, provide fuel to the muscles, and decrease the risk of dehydration and hyponatraemia (Périard 2014; Kovacs 2006). However, energy drinks with very high concentrations of sugar and caffeine are generally not recommended during play.

A bite to eat?

Another advantage that tennis has over other sports is that players can graze during change overs – the most popular products being bananas, sport bars, energy gels and sweets. Djokovic admits that he sometimes uses a power gel with 25 mg of caffeine before matches if he really wants to be fired up.

The LCHF debate does not seem to have hit the tennis scene (yet), so I will stay out of that minefield and reduce the Twitter dialogue from South Africa (https://soundcloud.com/bmjpodcasts/high-fat-for-health) !

Does the 2014 Wimbledon Champion play so well just because he eats well?

No, it’s far more complicated than that – growing up and playing tennis in a war zone, exercising up to 8 hours a day, doing lots of mental exercises, having a fantastic team around him, taking care of his body with stretching, strengthening and massage are just a few of the factors that have moulded a tennis superstar.

On what it takes to be a top level tennis player, the man himself says: “I would say 10% is talent, 85% is hard work and 5% is luck.” Novak simply fails to mention his diet!

Dr Babette Pluim is a Sports Physician with particular expertise in Tennis Medicine. She is Deputy Editor of BJSM. Follow her on twitter @DocPluim