“You cannot do concussion trials in humans.” mused Mike Turner, discussing the Zurich concussion guidelines at a recent conference. (OK, who said why not?)  Concussion, he said, causes functional disturbance with no structural damage, nothing to see on imaging, and resolves spontaneously in 7-10 days. It was, he suggested, just like your computer rebooting. But the Zurich guidelines are just as they say, guidelines (http://bjsm.bmj.com/content/47/5/250.short) with consensus reached from expert opinion based on the best available evidence.

The Lystedt Law, however, legislation first introduced 2009 in the state of Washington and named after Zackery Lystedt who had a serious brain injury playing football, has been adopted in most states across the US.  (http://www.cdc.gov/media/subtopic/matte/pdf/031210-Zack-story.pdf ).  Legislation,  guidelines…..or the courts. The message is that concussion is now being taken seriously.  It puts  doctors in a difficult position of pulling athletes out of competition but its good to see the macho, “play on” attitude disappearing. And, the athlete should be the last person to make that call.

Michael Schumacher’s ski related acute traumatic brain injury made international headlines. Others with similar injuries may go unnoticed. Athletes simply slip off the start lists. Few have the courage of Shaun White, the celebrated double gold medallist US snowboarder, who shouldered considerable criticism when he pulled out of the Olympic Slopestyle event on a course he considered too dangerous.  But, did you see the photographs (http://uk.eurosport.yahoo.com/blogs/thesochinetwork/scary-pictures-broken-helmet-show-sochi-dangers-110750900.html)  of the fractured helmet of  the Czech Republic rider Sarkar Pancochova, who may have lost a medal but walked away just a little dazed. Briton, Rowan Cheshire, who spent a night in hospital after being knocked out while training for the Ski Halfpipe was badly bruised and amnesic when interviewed a few days later. Plaudits to GB Chief Medical Officer, who was quoted “With a concussion injury there needs to be a rest period followed by a graduated return to play phase. The time scale is unfortunately too tight for Rowan”. These, and other injuries, must worry the IOC and International Sports Federations.

As Shaun White copes with the later disappointment of his fourth position in the Halfpipe event in Sochi, it could be worse.  Kevin Pearce, his closest US rival, crashed into a coma in a training injury in the lead up to Vancouver Olympic Games in 2010.  “Crash Reel”, a recently released documentary (http://thecrashreel.com/about-the-film/) tells his story, the tortuous recovery, the angst of his parents, the pivotal role of his brothers. But, it is a true life medical drama illustrating the risk of injury, immediate care, the challenge of rehabilitation, the importance of communication, managing expectations, and the long term medical and personality implications of traumatic brain injury. And, we could all learn lessons from watching our medical colleagues.

The film also features an appearance by Sarah Burke, the Canadian Freestyle skier who, during the period of filming, died tragically in a training accident. Dara Howell, Canada’s gold medal winner in Sarah’s event in Sochi, dedicated her medal to her memory. If you didn’t catch this documentary in the cinema, buy it. Medicine and sport; often fun, occasionally harmful, sometimes lethal.  “Crash Reel”, the best sports medicine film ever made? 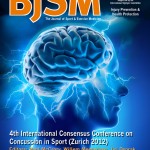 Domhnall MacAuley is a Consultant-Associate Editor at Canadian Medical Association Journal (CMAJ), Professor at University of Ulster and Sports Medicine Specialist, Family Doctor at Hillhead Family Practice, and has had various Editorial roles at BMJ