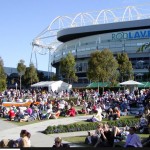 The scorching Australian Open has stirred up debate as to how safe it is to play tennis under extreme conditions. Some claim that it is part of the game, just like wind, rain, and playing late at night and that you just have to deal with it. Prepare, and try to beat the heat!

Others find the conditions to be unacceptable and too dangerous for health, and argue that play should be stopped when drinking bottles start melting on the court surface. Their main concern is that the extreme heat may lead to severe heat illness and possibly even the death of an athlete.

Emotions run high in these heated conditions, so let us try to separate fact and fiction by using available science.

A number of studies have investigated the thermoregulatory response of tennis players to heat stress.[1-3] These show that core temperature can be maintained at a safe level across a wide range of environmental conditions and is determined mainly by the intensity of the exercise and the resulting metabolic rate. The cooling mechanisms of the body (sweating and cutaneous vasodilatation) work in optima forma under normal environmental conditions and thermal equilibrium is reached and maintained after approximately 40 minutes of tennis match play.

However, in hot ambient conditions, core body temperature (CBT) is determined not only by the metabolic rate, but also by the environmental heat load.[3] The body’s cooling system has to work hard to reduce excessive heat when both the metabolic rate and environment heat load are high, causing extra strain on the heart. Work by Périard et al, who studied male tennis players during tennis match play in cool (~19°C WBGT, 22ºC) and hot weather (~34°C WBGT, 37ºC), showed  mean CBTs of ~38.7ºC under cool and ~39.4ºC under hot conditions, respectively.[3]  In addition, adverse environmental conditions (e.g. high air temperature, high humidity, solar radiation and no wind) will result in a high skin temperature and increased thermal discomfort (irrespective of the actual CBT).

As thermal discomfort increases, players decrease the pace of the match, which results in a drop in metabolic rate: an excellent example of autoregulation.[1,3] Players will generally take additional measures to cool their bodies and may use fans, ventilators, parasols, ice vests, ice towels, and cold water. BJSM’s ‘Online First’ includes a systematic review on the effect of cooling by Professor Christopher Tyler (UK). Currently the heat rules in tennis allow juniors, women and seniors to have a ten-minute break – and 15 minutes for wheelchair tennis players – between the second and third set to allow some extra time for cooling the body when the WBGT hits 30.1°C. This can reduce the CBT by 0.25°C.[4]

When must play stop?

But is there an air temperature or a WBGT when CBT will continue to rise over 40°C up to 42°C, because the environmental heat load is so high and the metabolic heat production so great that equilibrium cannot be reached? When are tennis players at risk of developing hyperthermia and possibly heat stroke and multi-organ failure? When do we need to stop play?

Cooling is easier in tennis than in some sports. American Football is requires players to wear protective clothing and running requires high intensity continuous work. In those sports, heat illness is more common than in tennis.

However, even the tennis player may be at risk if he/she is ill (cytokines raise the temperature set point), is severely dehydrated (less circulating blood to the skin and less cooling), has an underlying heart condition (increased strain on the heart) or has autonomic dysfunction (high spinal cord injury, less sweating). In these situations, great care must be taken to protect the players from potentially life threatening heat illness or heart problems.

This year’s Australian Open has illustrated that there should be an upper limit above which play should be suspended, even for healthy athletes. This upper limit seems to be around an air temperature of 42°C-43°C or a WBGT of 32°C; if not for the players, at least for the long-suffering spectators!

Infographic. Pain or injury? Why differentiation matters in exercise and sports medicine

Can high-intensity interval training improve mental health outcomes in the general population and those with physical illnesses? A systematic review and meta-analysis

Strength and conditioning in schools: a strategy to optimise health, fitness and physical activity in youths