With a healthy dose of intrigue, I set off from Bristol for Glasgow and the Association of Chartered Physiotherapists in Sport and Exercise Medicine (ACPSEM) Biennial conference in late October.  The high calibre international speakers and diverse topics in the conference programme had sparked my enthusiasm.

The conference venue was the University of Glasgow. Delegates could be forgiven for thinking they had been transported to Hogwarts, while Glasgow’s West End provided a plethora of amazing architecture, culture and restaurants. 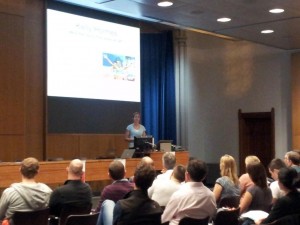 A conference entitled “Not everything in sport is Black & White” with the tag line ‘#add some colour’.  Surely this is why we attend conferences: to learn new ideas, to have our preconceptions challenged. The first day kicked-off with short lectures based around ‘The Profile of The Modern Day Athlete”.  Discussions covered topics including how our ability to sweat enables us to outrun our prey and why humans make lousy athletes. The question of whether champions were born or built was discussed, and our interaction with our environment explored. I wonder if, in the western world,    we have lost some of the patience we had in chasing our prey for so long.  Five minutes in a supermarket queue for convenience food seems to equate to ‘stress’ these days.

Topics were pertinent, with Dr Barry O’Driscoll speaking about concussion and current issues around the Pitchside Concussion Assessment (PSCA) in rugby. Recent events in the nation’s first sporting love, football, have highlighted the issue of concussion in sport to the masses.  Hopefully this platform will help those campaigning for better and safer procedures for decision making about return to play get their message across.  This needs to be heard: not just by medical professionals, but by coaches, trainers, players and parents of young players.

The first full conference day started with Dr Antonio Stecco talking about fascia.  The idea that up to 30% of muscle fibres do not reach the tendon or bony interfaces, instead blending into the deep fascia, means we need to rethink the traditional anatomical model.  The fascial system as a whole has a huge role in proprioception, so changes in elements of fascia, such as ‘densification’, a term Stecco used to describe increased viscosity of the fascia, is likely to impact proprioception and, ultimately how we move.

Dr Quentin Fogg further challenged ideas about anatomy basics through discussion on how muscle attachments actually work.  For example, the continuity between semitendinosus and anterior tibial fascia could have implications for anterior tibial pain. Dr Jay Shah gave really interesting lectures on the pathophysiology of myofascial pain, trigger points and the physiological findings around trigger points. With growing evidence, we can more adequately explain to patients why the problem may be somewhere other than where they feel the pain.

Coaches Frans Bosch and Vern Gambetta played their part in ‘adding colour’.  Bosch suggested that for highly skilled movement at speed, we need to move away from the idea of the hierarchical model i.e. cue the brain and it will tell everything in the body what to do.  He championed the idea of a ‘decentralised model’ with multiple ‘substations’ throughout the system that can adjust our control of movement.  Gambetta warned against confirmation bias, i.e. only seeing what you are looking for.

Bosch and Gambetta both urged us to rehabilitate  the entire movement, to go straight to the end point and move beyond just rehabing the muscle.  They also suggested that we should stop ‘over-coaching’ in rehab and allow the body to regain movement patterns independently.  Physiotherapist Dr Dylan Morrissey agreed there is a tendency to over coach, but cautioned against just allowing the body to work it out with the question ‘what if the body keeps getting it wrong?’  There was collective agreement on the need to ensure we move past low level rehab and challenge the body and movement patterns in relation to forces it will undergo.  Physiotherapist James Moore followed this idea through, suggesting that returning to running early in hamstrings rehab is important, while Johnson McEvoy discussed how the ability to resist fatigue is critical to reducing key risk factors to shoulder and upper limb injury.

Charlie McCall is a Sport and Exercise Physiotherapist at the University of Bristol Sports Medicine Clinic. http://www.bris.ac.uk/sport/sportsmedicine