Imagine being the brand new student trainer on an athletic team. You are ambitious, keen and ready to embark on a dynamic and rewarding journey in the industry. You grin as you stare out onto the field of football players, with your brand new Apple iPhone 5S cradled in your back pocket. 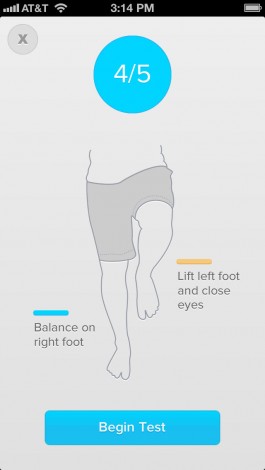 During a particularly brutal play, a burly linebacker takes one of your running backs down. You suspect a concussion; what are you to do? You fire up your ‘Sway Balance’ mobile application and give it to the player to hug close to their heart.

A concussion occurs due to rapid acceleration and resultant impact forces on the brain. The symptoms may last from several hours to several weeks, depending on factors such as age, physical condition and previous history of concussions (Brukner and Khan, 2012).  Trauma to the brain may cause symptoms such as headache, confusion and disorientation, dilation of pupils, amnesia, poor balance, and nausea and vomiting, the severity of which is dependent on the grade of concussion (CDC, 2010). A concussion can also incur serious long-term implications, even after an athlete has retired from sport.

The Sway Balance iOS mobile app provides a cost-effective method of evaluating balance in an athlete suspected of having a concussion. While the app is running, the player places the device to his or her chest, and is prompted to perform several balance assessments, similar to those you might see in a Balance Error Scoring System (BESS). The results are then compared to the athlete’s previously established baseline data set. This FDA-approved program is an important device in a trainer’s toolbox, mostly because it is less subjective than the BESS and more affordable than a force platform (Pogorelc, 2013). Nonetheless, there is potential for unnecessary harm; persons who are uninformed about the nature of concussion could easily be led to believe that balance is the only indicator in diagnosis.

Balance is somewhat variable and may change based on an athlete’s current physical and mental state, especially in athletic settings where factors such as stress and fatigue come into play. A fatigued athlete may score significantly different compared to his or her baseline values, consequently giving a false-positive. Conversely, allowing an athlete with concussive symptoms outside loss of balance could provide a false-negative. Without monitoring for delayed onset of symptoms, a concussed athlete thrown back into a game or competition could easily suffer significant long-term adverse effects. These effects and health risks further compound if the population involved is composed of youth or adolescent athletes.

The apps reliability was also questioned. Could the condition of the iPhone impact how accurate the calibration system is within the device itself? A study completed by Lee et al (2012) compared two different balance apps and they found no significant difference in calibration from the phone being dropped.

The Sway Balance mobile app, while pragmatic, accessible, and fitting with modern society’s need for instant gratification, should neither be the single deciding factor of whether a player suspected of concussion may immediately return to play, nor used in place of a qualified healthcare professional. A professional will be able to conduct a comprehensive, holistic assessment on an individual suspected of concussion. A conservative approach, rather than a diagnosis based solely on a balance evaluation, is crucial to ensure that the risk of further injury, particularly concussion sequelae, is minimized.

Disclaimer: The views of the authors do not necessarily constitute or imply product endorsement by BJSM. Neither the authors nor BJSM received financial support from the The Sway Balance iOS mobile app.

Keara Hooi is a fourth year Kinesiology student at UBC in the health sciences stream. She is currently a competitive gymnastics and cheerleading coach, and hopes to further her passion for exercise and rehabilitation through a career in physical therapy.

Jacqueline Mitchell is a fourth year Kinesiology student at UBC in the interdisciplinary stream. She is from North Vancouver and originally transferred to UBC from Capilano University. Following graduation, Jacqueline is planning on applying to the Masters of Physical Therapy program to pursue a career in physiotherapy.

Sarah Mackay is a fourth year Kinesiology student at UBC in the health sciences stream. She is from Calgary, Alberta and came to UBC in 2010 to swim competitively for the Thunderbirds. Upon completing her undergraduate degree, Sarah plans on perusing a career in medicine.

Anton Moshynskyy is in his fifth year of interdisciplinary kinesiology stream with plans to apply to a graduate program at UBC.

Jacky Shen is a fourth year Kinesiology student at UBC in the interdisciplinary stream. He is from Burnaby, British Columbia and originally transferred to UBC from Capilano University. Following graduation, Jacky is planning to pursue a Doctor of Chiropractic degree. In his spare time Jacky enjoys weight lifting, watching sports and spending time with family and friends.