Now that the dust (if not Hugo Lloris’ scrambled brain) has settled on the Spurs keeper’s knock to the head on Sunday, let’s review the situation and ask what we can learn. Let’s remember that the focus must be on what is best for this player, and sportsmen and women the world over

THE STORY SO FAR 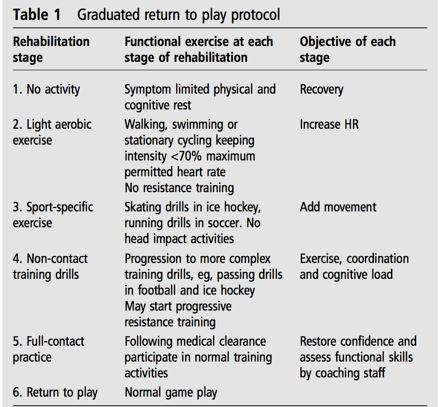 The short term dilemma for Spurs is whether Lloris plays tonight (Thursday night). They have put themselves in a difficult position. If he plays, then in addition to their breach of concussion protocol on Sunday, they will be breaching the RTP protocol which requires a minimum of 6 days graduated rehabilitation

[BJSM Editor’s note: Credit to Tottenham for clearly following the Zurich Concussion Guidelines here: The Manager is quoted as resting Lloris as a result of Sunday’s concussion. For non-expert readers, when Lloris returns to play should depend on his symptoms (and potentially neuropsychological tests, not a specific ‘time’ . One week is a minimum to progress through the stages (above) but it can take longer if symptoms (headache, unusual tiredness, dizziness) persist. ] Posted on Thursday Nov 7th after the Europa Cup game.

How should this have been handled?