Pre 1996, there was a perception amongst the public that golf was more of a game than a sport. Amongst the professional ranks there was a somewhat ambivalent attitude to fitness, which still permeates facets of the elite ranks even today. Although Gary Player was, and still is, remarkable in terms of his unwavering commitment to physical conditioning, for years he was seen as an outlier amongst the pro ranks. However, in 1996 one event radicalised all that and transformed the perception of golf, the fitness element, and of course the pay packets. Tiger Woods turned professional.

In the aftermath of the European Tour’s flagship event at Wentworth, UK, won in dramatic style by Matteo Manassero, attention is now focussed on a new generation of golfers who grew up idolising Woods. Their attitudes to fitness, conditioning and levels of athleticism send out a foreboding message to their competitors; get busy training or get left behind. Golf is a hugely technical pursuit, and golf skills (whether it is shot making, course management or ball striking) will always remain the central tenant of performance. However, maximising one’s physical ability to build power, speed and distance around such golf skills is becoming increasingly necessary to compete and challenge for victories. Of course, outliers will always exist, and science and medicine is littered with anecdotes of the healthy 90 year old chain-smoker. In high performance sport, the days are numbered for those who ignore the realm of physical conditioning.

Many sports require rotational power. Thus, golf fitness and training share many similarities at a conceptual level with track and field, martial arts, baseball and other throwing sports. Ultimately, form and function are inextricably linked and training should always replicate where possible, the mechanics and sequencing of the requisite task. Golf is a rotational game, ostensibly aiming to get the club head to make contact with the ball consistently, accurately and as fast as possible without sacrificing movement efficiency. Some of the top touring professionals can generate club head speeds of over 120 miles per hour, which is phenomenal. To consistently hit a small target the size of a golf-ball with predictable accuracy at such speeds requires extraordinary timing and sequencing in the golf swing. Some are blessed with preternatural timing (look at videos of Rory McIIroy or Tiger Woods swinging a club as toddlers) whereas others have had to work harder to develop the neuromuscular control. Ultimately, timing and sequencing are required to generate power from the ground up, rotating the trunk around a stable pelvis with hips fully loaded and then, like a whipping action, the downswing is initiated by the hips, followed by the trunk and finally the arms and club head being ‘bull-whipped’ towards the golf-ball. This requires appropriate timing in the back-swing to load the kinetic chain with ‘elastic potential energy’ and the correct sequence of acceleration/deceleration in the downswing to generate controlled explosive rotational power. 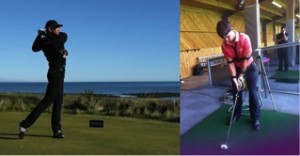 There is no perfect swing! Compare the swing patterns of Jim Furyk, Eamonn D’arcy, Bubba Watson, Ernie Els and Tiger Woods. Each will have their idiosyncratic stance position, backswing and how they initiate the downswing but what most top professionals will share is the impact position and the segmental sequencing of the downswing to impact. Ultimately the best swing is the one that is best suited to an individual’s own physical capabilities. However, this can be a grey area and is where a collaborative approach between a golf coach, a physiotherapist and fitness trainer can be utilised for maximum effect with their collective understanding of biomechanics and physiology.

Greg Brodie (Performance Coach and PGA Advanced Professional, Surrey County Coach), believes that, “putting your body in an optimal state for golf performance with the aid of physiotherapists and conditioning experts who specialise in golf is a major facilitator in skill development”.  He adds that, “So many golfers have a good understanding technically of where they need to be and are desperately trying to change their movement patterns without actually looking at the raw materials they are working with. Sadly many just try to change movement via drills or tuition which can be a futile exercise”.

A golf coach can try to teach a player a certain swing, but if the player cannot physically get into the position required for that swing, then the coaching may be stymied by such physical restrictions. A physiotherapist can help to identify reversible movement deficits (both in terms of limitations in range of movement or faulty motor-control patterns) or in the case of an injured player can help with swing analysis to identify potential causes for the pain or injury and how it may relate to the cause or effect of poor swing mechanics. 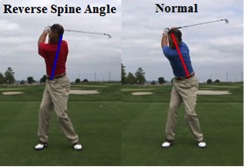 The most common injury amongst amateur and professional golfers is low back pain and often it can manifest as a result of limited trunk rotation. For right handed golfers, right sided low back pain tends to predominate. As an example, when a golfer attempts to rotate into the backswing, to compensate for the rotational deficit to get the club head to the top of the backswing, they may begin to extend and side-flex through the lumbar spine putting increased stress across the facet joints and other structures. From that extended and side-flexed position at the top of the backswing, the player then begins to flex and rotate as they transition into the downswing, and it is this repeated extension/flexion/rotary movement of the lumbar spine that can lead to biomechanical overload of the lumbar region. This classic swing characteristic is called a ‘reverse spine angle’ (although this can happen for reasons other than limited trunk rotation) and is suggested as a primary reason for Colin Montgomerie’s recurrent spinal dysfunction.

A less common injury, but absolutely devastating for a professional golfer, is an injury to the triangular fibrocartilage complex (TFCC) of the wrist (usually of the lead arm). One possible reason this may occur is due to the swing characteristic called ‘early extension’. In this instance, as the player moves through the downswing towards impact, instead of maintaining a stable pelvis, the player begins to extend both hips (and pushes the pelvis forwards closer towards the ball, away from the red line as seen in the accompanying photograph). As a consequence of this, in order to keep the clubhead on swing plane to make contact with the ball, the player has to make a compensatory movement, such as excessive ulnar deviation at the wrists. This overloading of the wrists may cause a TFCC injury 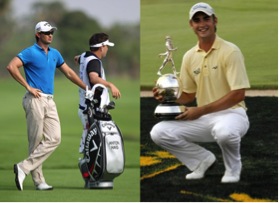 Whether in rehabilitation from injury, working on swing mechanics or overall fitness, team-work and the multidisciplinary approach are central to the players’ performance. Good communication between the medical team and the golf coach is essential and it is important that the medical team can speak and understand the language of golf terminology, both when liaising with the coach and when imparting advice or diagnostics to the player. For elites and amateurs alike, in assessing a player with a variety of golf specific screens and other standard musculoskeletal/orthopaedic tests, the findings must always relate back to how it affects the golf swing. And more importantly, the success or failure of any corrective intervention will coalesce around ‘player buy-in’ and how clearly the interventions are linked to performance improvement with obvious specificity to the golf swing or on-course performance.

One of our interesting cases over the past year related to the South African player Anton Haig. Anton is a multiple winner on tour, with his most notable victory coming at the 2007 Johnnie Walker Classic as a precocious 21 year old. However, due to a debilitating neck injury sustained in 2011, Anton retired from professional golf aged 25. In 2012, he set about making a comeback and as part of his coaching team, we were involved in modifying his swing and changing his physicality to ameliorate the effects of the neck injury. It has been a fascinating challenge helping guide Anton back from retirement, culminating with him securing his Asian tour card for 2013.

Golf is an explosive sport with tremendous club head speeds that can stress the body in myriad ways. Consistency in timing and sequencing is fundamental for consistency in scoring and accuracy. A variety of injuries can be the cause and effect of poor swing mechanics but a coaching team with physiotherapists with golf specific understanding can complement a player’s development and longevity. The concept of golf fitness and being fit for golf is an idea that is increasingly permeating through the ranks of the hackers, amateurs and elites. Employing the use of a coach or physiotherapist is not for everyone of course, but for those with ambitions to improve performance (whether it is to get a handicap into single figures or more lofty tour ambitions), a multidisciplinary coaching team can make a significant difference.