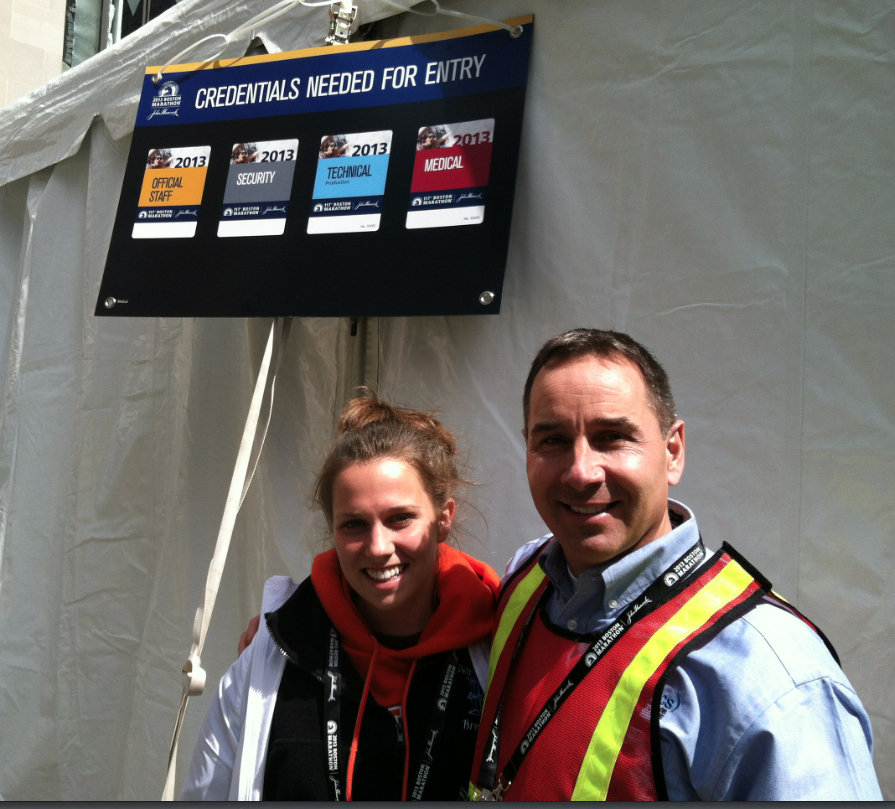 Born in Boston in 1965 and having run the race twice, the Boston Marathon has always been a special event for me. I returned in 2013 for my fifth year as a medical volunteer.

This time would be special. My 18-year old daughter would be working and shadowing me as part of her senior year high school project. She had been contemplating her career choice; an emergency department nurse or an athletic trainer. This day, Patriot’s Day in Massachusetts, would be a day that would shape her career choice and forever bind us together.

We arrived in Boston a little after 6 am. Plenty of time for us to get a coffee and bite to eat at the Starbucks just 75 yards shy of the finish line on Boylston Street. We made our way down to the finish line and took a few pictures of Alyssa standing under the media bridge. It was quiet at 6:30 am except for a few media personnel setting up their cameras in preparation for one of the world’s greatest marathons. The Grand Stands were empty but would be packed with family members, fans, men, women and children in just a few short hours -all excited to watch their runners finish the grueling 26.2 mile event. We could never have imagined that the very spot where I was taking photos would later be littered with bomb blast debris, human flesh, and bones.

Arriving at the pre-race meeting Alyssa was impressed with the abundance of volunteers, smiling faces, camaraderie, and organization of this massive event. The meeting introduced the new and prior volunteers to the logistics of the medical support structure at the Boston Marathon. Chris Troyanos, the medical coordinator, thanked and praised last year’s volunteers for their incredible efforts caring for over 2000 athletes suffering the effects of record breaking heat. This day was expected to be cool with a bit of a breeze. Cramps, nausea, post-race collapse, and mild hypothermia were anticipated….the usual marathon ailments. We broke from the meeting and dispersed to our respective medical treatment areas along the race course and near the finish line.  Alyssa and I went to Med Tent B, approximately 1-2 blocks from the finish line, where I would spend the next two hours coordinating my team of approximately two hundred volunteers.  Our volunteers were excited, motivated, and anxiously awaiting our first potential patients. We were able to view the finish line area on two large flat screens monitors set up in the tent. Approximately 3 hours into the race we began to get a slow trickle of patients who were cold and cramping. At 4 hours we were approximately 75% full of patients who were cold, exhausted, and worn out from the trek from Hopkinton to Boston. 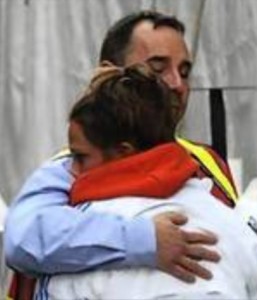 At 4 hours and 9 minutes into the marathon, our lives would change forever. I will never forget the look on Alyssa’s face when the first bomb went off…then the second one. We heard and felt the blasts.  Everyone in the medical tent froze in place. The flat screen monitors went dead, cell phones stopped working, and we lost all communications with the rest of the medical command. I stood on a milk crate and got on the tent intercom system. “We all need to stay calm. We don’t know what has happened yet but there is a good chance that we will receive causalities. Stay in the tent, take care and stabilize your current athletes, and let’s get the tent ready to receive trauma casualties.” The response from the volunteers was incredible. No panic, no hesitation, and a total team effort. During this time the first responders at the finish line, including Tent A marathon medical personnel, heroically triaged and stabilized the casualties. We were told to stay put in Med Tent B as the blast area was not secured and more explosive devices were possible. We received 3 minor shrapnel injured patients and saw the psychological effect on the spectators. People were running frantically trying to either get away from the blast area or looking in horror for their loved ones in our medical tent.  Runners were diverted to the Boston Commons as the course finish area was secured and evacuated. Amazingly most of the casualties were evacuated from the finish area within 30 minutes.  It was an incredulous response to a tragic event.

So what lessons were learned and how does this change the future of endurance event medical coverage? I will shed some light on this from my year in the 28th Combat Support Hospital in Iraq where we frequently responded to tragic events like this.

I could not be more proud of the Boston Marathon medical volunteers who responded to this tragic event.  As with the tragedies of 9/11 this event once again made us all realize the important things in life; family, friends, freedom, and faith. Thankfully my daughter Alyssa is fine. She will be a terrific ED nurse someday. And she now wants to run the Boston marathon as a tribute to those who were killed and injured. Maybe we’ll cross the finish line together…Boston Strong!

Fred H. Brennan, Jr is currently the medical director at Seacoast Orthopedics and Sports Medicine in New Hampshire and a team physician for the University of New Hampshire. Dr. Brennan studied at the University of New England College of Osteopathic Medicine, completed his family medicine residency at Albany Medical Center and a sports medicine fellowship at the University of Toledo.  A member of the American Medical Society for Sports Medicine (@TheAMSSM), he chairs the musculoskeletal ultrasound committee.   Previously he was an active duty physician for the US Army with service during Operation Iraqi Freedom as a trauma physician. An avid endurance athlete, he is a Hawaii Ironman finisher and a two-time Boston Marathon finisher.

The AMSSM is one of BJSM’s 13 member societies – clinical societies who partner with BJSM to advance the missions of the organizations. The January 2013 issue of BJSM was guest edited by the AMSSM. 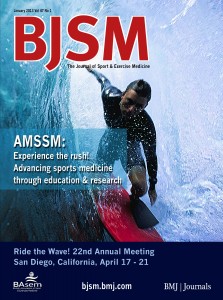