Liam West has persistently publicised how the pathway into SEM is unclear. As emphasised by Joy et al.,1 most undergraduate medical and physiotherapy curricula have little SEM teaching and many students are ill or not at all informed. However, a number of factors have made SEM more accessible to students than ever before:

It is time for students to be proactive and not pessimistic! Especially since UK-SEM enthusiasts can continue to ride the wave of opportunities (in health promotion and/or professional sport) encouraged by the London 2012 Olympic Games. 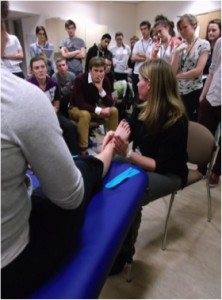 Cardiff SEM Society (CSEMS) hosted the Cardiff Olympic SEM Conference, on Saturday the 15th December 2012, aimed primarily at undergraduate medics / physiotherapists and those early into their post-graduate training. The society’s previous conference in March 2012 was a big success attracting 200 delegates from across the UK. We decided to build upon these foundations to create another engaging and interesting day of talks and workshops with the overarching theme of SEM at the Olympics.

The majority of the 22 speakers had a direct involvement with healthcare provision at the London 2012 Olympic Games and were happy to share their knowledge and experiences to delegates. Keynote talks included Dr. Mike Loosemore’s account of the Olympic Legacy, the story of 5 Olympic Games by Dr. Rod Jaques, and a physiotherapist’s perspective of London 2012 and the lessons learnt by Ms. Caryl Becker (Chief physiotherapist to the British Olympic Association). Students are rarely told how best to get involved in SEM, so we thought it was also important that the pathways into SEM for both medics and physiotherapists were covered during the morning session.

The afternoon consisted of five parallel streams that each contained four talks. We wanted to provide a broad selection of topics for our delegates to choose from, such that all those attending could learn something new. A copy of the full delegate booklet and detailed programme can be found here.

The conference was proudly endorsed and supported by numerous national and international bodies and associations; FSEM, BASEM, ECOSEP, ACPSM, BASES and BASRaT. Student research was exhibited as part of a poster competition sponsored by BASEM and the shortlisted posters were well-received by delegates and speakers alike. A charity raffle raised £250 for the Laureus Sport for Good Foundation; prizes included a signed Welsh rugby jersey and several popular SEM textbooks.

The day was a success with over 240 delegates coming from throughout the UK and some from even further afield. The array of lectures and seminars throughout the day were popular, as were the small attendance fee and the potential for networking with senior colleagues within the world of SEM. We strongly feel that future student conferences and wider access to larger conferences, such as the annual BASEM Congress, will serve to fuel the enthusiasm of undergraduates exploring the specialty of SEM through their local societies and USEMS.

Our conference aimed to educate and inspire undergraduate and post-graduate delegates who will be the future workforce in SEM throughout the United Kingdom. We must not allow the boost that the Olympic Games have given to our nation’s commitment to exercise to wane into insignificance. We felt that this was our chance to help inspire a generation of SEM physicians capable of doing just that – hopefully we have played a small part in this process! Please look out for the next CSEMS national event, a physical activity symposium fronted by Prof. Steven Blair on the 15th June, to learn how and why we should all get active.

Conferences are a great way to learn and meet like-minded people. If you’re an undergraduate wondering which sort of SEM conferences to go to, Holly Weaver’s blog article gives an excellent overview. Alternatively, why not organise your own? Whilst organising a conference requires extensive time commitment, patience and dedication, it is extremely satisfying to feel as though you’re giving an experience to your peers that they may not get elsewhere – USEMS are now helping students to run an annual undergraduate SEM conference. Also, if your university doesn’t have a SEM society but you feel it should, contact USEMS and they will help you set one up!

Judging by the success of our conference it is obvious that the passion amongst undergraduates for SEM is extensive. If you are a healthcare professional working in SEM we have a question for you; are you willing to offer opportunities to students in the form of shadowing or by involving them in your research? Next time an enthusiastic student asks if you can help them on their way into SEM, consider how you can help inspire the next generation!

Bryn Savill BSc (Hons) is a fourth year medical student at Cardiff University, Wales, having undertaken an intercalated BSc in Sports and Exercise Science at Loughborough University. He sits on the undergraduate committee of the European College of Sports and Exercise Physicians (ECOSEP) and is a Move. Eat. Treat. Ambassador.

Rob and Bryn are the current Vice-Presidents of Cardiff Sports & Exercise Medicine Society. For more information about CSEMS or to contact the authors please email cardiffsems@hotmail.co.uk or visit the website here.