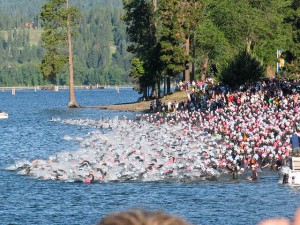 I was very interested to read Dominic Malcolm and Andrea Scott’s BJSM editorial on suicide, sport and medicine (2012) and agree that more attention should be paid to the psychological welfare of athletes.

I am a doctor, albeit not a psychiatrist, and have also been part of the British triathlon team since 2005. On several occasions I was acutely aware of depression in athletes that has gone apparently undetected. In one particular case, a female athlete was deliberately self-harming in response to her perceived poor performance in training. She had inflicted substantial lacerations to her forearms, which were obviously visible when swimming. I felt a duty of care to report this to her coaches and challenged them on whether or not they had noticed the wounds. The response from the first coach was they had not noticed and from the other coach was that they had noticed but felt inadequately qualified to address the issue.

This is just one example of where education is needed to identify warning signs and hopefully prevent catastrophic consequences. Not only the sports physician, but the whole support team needs to be aware of signs and symptoms for mental health issues.

Treatment for athletes is available. Education in what services are available is the key to providing mental health resources. There are sports psychologists who work closely with teams and individual athletes, general practitioners and team doctors with mental health training may also be useful and in more serious cases tertiary referral to a psychiatrist. Cognitive behavioral therapy and antidepressants are currently used with good effect. There is also an important role for preventative medicine in identifying “at risk” individuals and implementing early intervention.

Screening may be useful. Some simple signs for the performance team to look out for are: changes in appetite and weight, withdrawal from other team members or friends, crying, tiredness, indecision, anxiety, moodiness, loss of enthusiasm, feelings of sadness, lack of concentration and anger.

A simple tool that, as far as I know, is not widely used but may be helpful in a coach-athlete setting is a self reported “vigor” score. Ask athletes to rate their level of vigor from 1-10 on any particular day. Scores consistently of less than 5 may merit further investigation.

In the case I describe in this blog, a sports psychologist became involved and with counseling the individual went on to perform internationally at a high level. Good mental health will ultimately lead to better athletic performance and is as important as good physical health.