The response to photo competition was great. Photo submissions from the Olympics and Paralympics were considered for the front cover issue of this year’s BASEM edition of the BJSM. Our winner was Ian McCurdie’s action shot from the BMX. However, we also want to give special mention to a few runners up.

Mike Burdon and Simon Petrides didn’t highlight the sporting action nor their medical prowess… More so, they highlighted what sports medics did in their down time. It’s moments like these that keep us all going through a long event. So, in their own words: 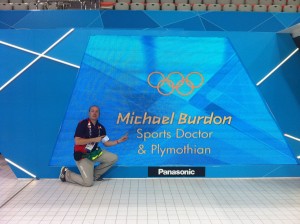 “I was working in the aquatics centre for 2 weeks as sports medicine doctor. I was asked to cover field of play on the last evening of diving for the 10m men`s platform final. We had been covering training/doing practice drills etc and had some time before the arrival of crowds for the final event.  The atmosphere among the various LOCOG volunteers was great. In exchange for a pin badge I had collected, one of the technicians agreed to put some of our names on the board in lights (I felt this was a great bit of business on my part!). Its location at the pool is where the divers and swimmers are announced to the crowd and just next to the field of play medical room. I decided to have the board display what I thought I represented – being Plymothian and a sports doctor. I was very nervous that evening as Tom Daley was diving. I have worked in diving and know Tom well, also being a fellow Plymothian. I was delighted that later that evening he won his much deserved Olympic medal. This rounded off a memorable two weeks for me.” 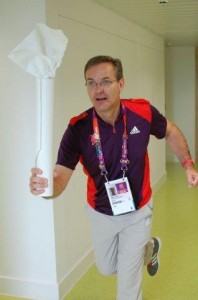 “It was taken by Dr Dan Ornadel (respiratory physician) as he caught me re-enacting the lighting of the Olympic flame whilst taking a well-earned break between patients at the Polyclinic. I was working there as an MSK and SEM physician. After 2 weeks of 4 am starts and all the excitement perhaps the endorphins were removing all inhibition!”

Thanks again to everyone who entered!