Background/Aim – Sedentary behaviour is associated with a variety of chronic diseases and considered as a health hazard. Worksite interventions, which decrease sedentary time and increase physical activity during working hours, may improve health of sedentary workers.

Methods – In this study we tested a specially designed exercise device, which allowed linear feet movements at the horizontal plane and hence the under-desk use. The device had friction resistance mechanism, which was equipped with a temperature sensor for objective monitoring of exercise intensity, duration and amount of exercise. Four healthy volunteers were provided with continuous access to the device during their normal activities at the desk.

Results – It was shown that the amount of exercise achieved during 30-minute dedicated device usage at moderate intensity was 131.0 kC⁰, as measured by the heat production in the device. According to the current exercise guidelines, this amount of exercise could be considered as the recommended daily amount of physical activity. Exercise concurrent with the use of computer resulted in the device usage equal to 251.6 kC⁰. The concurrent exercise was of lower intensity than dedicated exercise, but longer duration of device usage, which was achieved in several bouts, resulted in accumulation of significant total amounts of exercise.

Conclusion – This study suggested for the first time that under desk exercise could complement the use of computer and result in accumulation of amounts of exercise exceeding the recommended daily amounts of physical activity. Larger studies are warranted for evaluation of under desk exercise in various sedentary occupations.

Physical inactivity is considered as an important health hazard and reduction of sedentary behaviour could improve population health by preventing the development of chronic diseases.1 However, the levels of physical activity at work are continuously declining2 and full-time workers in sedentary occupations remains immobile for approximately 11 hours per day and don’t have enough leisure time for sufficient exercise.3 Unfortunately, modern megatrends in information and communication technology may negate the effects of planned physical activity interventions.4 Conversely, regular physical activity in the workplace would result in decrease of sedentary time and hence in improvement of employees’ health. A variety of worksite exercise programmes were tested to increase employees’ physical activity.5 However, it might be argued that short bouts of exercise (e.g. use of stairs) are not lengthy enough for substantial reduction of sedentary time, whereas dedicated exercise bouts require allocation of extra time during working hours.

Exercise devices facilitate regular physical activity and three major types of conventional fitness machines were tested in the workplace. The use of treadmill was shown to be compatible with the worksite activities of medical transcriptionists6 and it was calculated that replacement of sitting with walking-and-working computer time for 2-3 hours/day would result in a weight loss of 20-30 kg/year in obese workers.7 However, treadmill walking caused decrease in the measures of fine motor skills and math problem as compared with seated conditions.8 A miniature bike installed in the office was used for 23.4 minutes a day on 3 out of 5 working days.9 A miniature stepping device increased the energy expenditure over sitting condition and it was calculated that, if it used to replace sitting by 2 hours per day, weight loss of 20 kg/year could occur.10

The under desk exercise device would have the advantage of convenience and accessibility for prolonged use during working hours. In this study we tested feasibility and efficiency of specially designed under-desk exercise device.

A novel resistance exercise device MedExercise ST (MDXD Pty Ltd, Australia) was used in this study (Figure 1A). Changes of temperature in the resistance unit were measured with a temperature sensor connected to the industrial multimeter IP57 (Digitech, Australia). Data was collected using respective software Multimeter V1.0 from Digitech and then converted into Excel databases (Microsoft, U.S.A.) for analysis. The average exercise-induced rise in temperature was calculated after subtraction of ambient temperature values. The heat production during usage of the device was expressed in kCo (average + SD), which was the average exercise-induced rise of temperature multiplied by the duration of recording in seconds. Fingertip pulse-oximeter CMS-50E (Contec, China) and corresponding SpO2 Review software were used for the continuous measurement of heart rates during the exercise. Overall, four healthy volunteers, aged between 36 and 49 years, participated in this study. Respective informed concerns were obtained. Statistical analysis was performed using the Student’s t-test. 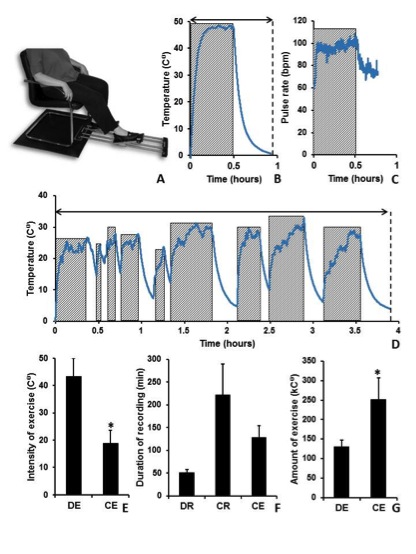 Figure 1A shows the user sitting in the stationary chair, such as a standard visitor chair. During the exercise user’s feet were moving in horizontal plane without rising of the knee that allowed leg movements under the desk. Repeated leg flexion-extension cycles resulted in physical efforts of the user and respective heat production in the resistance mechanism of the device due to friction. Figure 1B shows that the usage of device installed under the desk caused a fast rise of temperature to the plateau level, whereas stopping of exercise resulted in a drop of temperature to the pre-exercise values.

The current physical activity guidelines suggest that all healthy adults aged 18 to 65 years need moderate intensity aerobic physical activity for a minimum of 30 min on 5 days each week’.11 Therefore, 30-minute usage of under-desk exercise device in moderate intensity could be considered as the recommended daily amount of exercise. Accordingly, the device was used for 30 minutes (Fig. 1B, pattern filled area) with no other activities involved (dedicated exercise). At this intensity of device usage, a pulse rate of the participant was around 100 bpm (Fig. 1C), which indicated a moderate intensity of exercise in healthy adults.12

The amount of device usage and hence the amount of exercise were calculated as the average exercise-induced temperature rise multiplied by the duration of recording expressed in seconds (Fig. 1B, double sided arrow). Overall, dedicated under desk exercise for 30 minutes resulted in the average temperature rise of 43.4+6.6 C⁰ and the corresponding total amount of device usage of 131.0+15.7 kC⁰ (n=5) (Fig. 1E and 1G, respectively). According to the current exercise guidelines,11 this amount of exercise might be considered as the recommended daily amount of physical activity, which was achieved solely by using of under-desk exercise device.

Significant evidence is presented for the benefits of worksite exercise in sustaining employee health, whereas the technical features of conventional fitness machines may limit their use in the workplace. For example, installation of  ‘walk-and-work’ desk, which is based on treadmill, requires a significant modification of the workplace.13 In contrast, MedExercise ST was designed for use under the desk and hence can be used seated with the standard desks and chairs with no modifications.

Using this device, we have demonstrated for the first time the feasibility of effective under desk exercise at sufficient intensity and duration to be considered as the recommended daily amount of physical activity.11 This pilot study also suggested that the under-desk exercise machine could be used concurrent with computer and hence in the workplace. Therefore, it might be an effective tool for reducing time spent sedentary while at work and for achieving the recommended daily amount of exercise. Since the lower average intensity of concurrent exercise, it required longer duration of device usage (e.g. 68.7 minutes) to equal the recommended 30-minute daily exercise of moderate intensity.11 Nonetheless, 68.7 minutes constitutes only ~10.4% of daily sedentary time of working population.3

Importantly, the concurrent exercise does not require significant modifications of the lifestyle in order to allocate dedicated time for exercise. It might result in better adherence to regular physical activity regime and provide better health outcomes when used in combination with other modes of physical activity. Limitations of our study include a small number of participants and types of sedentary activities that warrants further studies. Future research is also needed to evaluate effect of the under desk exercise on employee productivity, health and weight loss.

Dr Vadim Dedov has a stake in MDXD Pty Ltd, which designed and produced the equipment used in this study.

This research received no specific grant from any funding agency in the public, commercial or not-for-profit sectors.

Both authors contributed equally in experimental design, data collection and analysis, and preparation of manuscript, which has been read and approved by them.