Sport and Exercise Medicine: The UK trainee perspective (A monthly series on the BJSM blog) 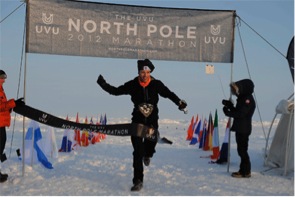 Increasing Physical Activity is the biggest public health challenge of the 21st century.  Steven Blair’s message is so powerful that it is worth taking to the ends of the earth. I’m currently working for our CMO Harry Burns in the Scottish Government, promoting physical activity for health as part of their Sport and Physical Activity policy team.  Sir Harry is a fantastic advocate for this important form of medicine and enjoys running himself.

In March I received a late call up to take part in the North Pole Marathon. The race itself takes place at the Geographical Pole.  I’d be helping provide medical cover whilst competitors readied themselves and went husky racing etc. in Spitsbergen – 79 degrees North.  The North Pole is only “inhabited” for 3 weeks of the year, as for the rest of the year it is either permanently dark or the ice starts to break up.  Russians sky-dive in and set up an ice runway each year.  The video footage of tractors floating down on parachutes over the pole is bizarre.  The base doctors take care of competitors during the race itself, with a full medical kit that included a gun. Race director Richard Donovan explained that if a polar bear did turn up that it would be disqualified for failure to enter the race and could be discouraged from hanging around by firing a few shots in the air.

The old medical idiom that “prevention is better than cure” holds true in the Arctic, and of frostbite and hypothermia in particular. We advised competitors on clothing strategy (basically to cover every inch of the body), and when to seek medical attention. The risk assessment ensured that a lapped course kept competitors visible to staff, and avoided any leads/breaks in the ice. A warm tent was available to stock food and water for runners and to ward off any impending hypothermia.  Warm areas had been assigned for self-treat i.e. blisters, as well as for minors and majors.

The race itself is like no other, run not on land but on the frozen Arctic Ocean. Some competitors wear snowshoes with their Gore-Tex trainers to traverse the white world of this beautiful natural freezer.  The 9th of April brought perfect conditions of -26 Celsius and light winds.  The full medical kits were cross checked and the race began.

Amazingly all 41 competitors, from 18 different countries finished with the event even featuring a marriage proposal. Spectator numbers were low, although a seal did pop up occasionally.  I ran round in 4hrs 17 mins, whilst the final competitor took over 11 hours.  There were only a few relatively minor cases of frostbite (much to the disappointment of the documentary makers), in addition to the common expected musculoskeletal injuries.  Anterior knee pain was especially common probably due to the wide gait adopted to chew through the deep snow by most runners, whilst other injuries seen included Achilles tendinopathy, ankle dorsiflexor tendinopathy, and a hip flexor injury. I helped patch runners up once I had finished, and advised the few that were injured on appropriate treatment, including what to tell their doctor in Mauritius who presumably doesn’t see much frostbite.

I think we all have the opportunity to promote physical activity for health.  Steven Blair, Karim Khan, Mike Evans, Richard Weiler and others have done much to produce data, and frame it imaginatively. 23 and a half hours is a must share resource, and sticky messages like “Smokadiabesity” seem to resonate with the public and policy makers.   Additionally, sporting events like the North Pole Marathon offer the chance to put forward a health message.

On a personal level, I’m looking forward to running seven ultra-marathons on seven continents in seven days in November this year, with the sole aim of promoting physical activity as the single best thing that we can do for our health.

Andrew Murray is a Sport and Exercise Medicine Registrar in Scotland.  His book is called “Running Beyond Limits” Mountain Media.  He failed to mention in his blog that he won the North Pole Marathon 2012!