The CAS has ruled that the British Olympic Association cannot exclude dopers who have served their bans from future Olympic teams. The decision pushes Dwain Chambers back into the spotlight. He has kept a low profile over the past few months, although his agent, barrister Siza Agha, has been eloquent on his behalf:

“Redemption is an integral foundation… of any democratic society. It is not recognised in dictatorships, Greek mythology and the British Association bylaw.”

Well, the BOA bylaw has been deemed “noncompliant” with World Anti-Doping Agency rules. If Dwain Chambers runs the qualifying time and achieves a top-two finish in the 100m trials, he will be given a spot on the British team. 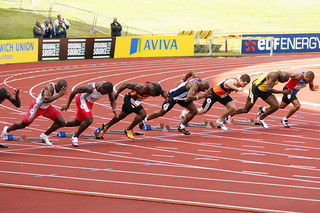 In the words of head coach Charles Van Commenee, Chambers is “a  likeable guy and a damned fine athlete.” His willingness to share his story has helped anti-doping efforts and dissuaded other athletes from making the same mistakes. A home Olympics swansong would represent an unexpected chance for redemption on the running track. Although probably still Britain’s fastest man at thirty-three, Chambers would be outside shot to reach the 100m final. It has been his misfortune to get caught in the crossfire of an overheated and complex debate.

The question of what sanctions to impose upon drugs cheats is understandably an emotive one, particularly for the clean athletes who spend years pushing their bodies to their natural limits. Sebastian Coe and Daley Thompson, two of the senior statesmen of British athletics, have been outspoken in their support for lifetime bans.

Such a stiff sanction would be difficult to enforce. If you want to impose a lifetime ban, which will destroy an athlete’s career, then the proof of their guilt needs to be pretty devastating. For a variety of reasons, doping control scientists are not yet able to establish such a secure verdict in most cases. More frequent and stringent testing would help, but we should be wary of sacrificing the right to privacy in the name of clean sport.

There is also a strong case for distinguishing between accidental and deliberate cheating, particularly in cases like LaShawn Merrit’s. The 2008 Olympic 400m champion tested positive for a banned steroid and was given a short ban, as the court was convinced that he took it inadvertently when he tried the male enhancement product Extenze.

WADA has done part of its job by bringing consistency to doping sanctions, it now needs to consider whether these sanctions are tough enough. The vast majority of athletes and fans want competition on a level playing field. I hope that’s what we see in London this summer.