The recent World Championship in Snowboard in Oslo, Norway led me to the question in this blog’s title. I am a sports doc with extensive experience in treating high level athletes in almost all kinds of sports (except Aussie rules football and cricket).

Since 2000, I have been involved in studies aiming at preventing sports injuries. We have targeted football (soccer), team handball and Alpine skiing and have had some success.  Newer sports however, keep popping up. Almost like the doping hunters  – often being too late to prevent new, effective performance drugs – it seems that we are too late to prevent injuries in some of the new sports.  I was reminded of this during the recent Snowboard Championship in Oslo: new venues for cross, half pipe and slope style situated beautifully in the Oslo countryside. The first days had bad weather and difficult light and there were some serious injuries- not life threatening, but nevertheless serious.

I have noticed a similarity with the last few Olympic games: the venues get bigger, the athletes better trained and with ever increasing abilities. Unfortunately, there is also an increase in injuries. The numbers from Vancouver showed that 35% of snowboard cross and 13% of half pipers experienced injuries.

What can we do to prevent these? We can count injuries, identify risk factors, study how to reduce these and aggressively implement our knowledge. In the meantime, the sporting venues get larger and more challenging and knowledge from our studies become yesterday’s news. I know that the majority of the athletes appreciate the danger, but I am not sure that the top leaders of the sport have the same awareness.

I need ideas to help the athletes operate in a safer environment- any ideas?

Note that the BJSM publishes 4 issues a year dedicated to Injury Prevention and athletes’ Health Protection (IPHP). You can find these issues of BJSM by clicking here. The next IPHP issue will launch in June and will focus on Olympic Sports. IPHP issues are published as part of BJSM’s partnership with the International Olympic Committee.

Lars Engebretsen MD PhD is a professor and director of research at Orthopaedic Center, Ullevål university hospital and University of Oslo Medical School and professor and co-chair of the Oslo Sports Trauma Research Center. He is also Chief Doctor for the Norwegian Federation of Sports, and headed the medical service at the Norwegian Olympic Center until the autumn of 2011. In 2007 he was appointed Head of Science and Research for the International Olympic Comittee (IOC). Professor Engebretsen is Editor of the IPHP issues of BJSM (Injury Prevention & Health Protection) 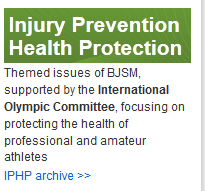