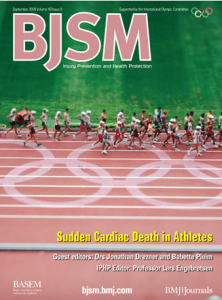 This week in Circulation, Dr. Eloi Marijon and colleagues from France published their findings on sports-related sudden death.  This 5-year prospective observational study is an impressive achievement and also has a number of important findings.

How high is an athlete’s risk of SCD?

When considering ECG screening in athletes, many opponents suggest that athletes should not be selected out and receive more advanced screening at an additional cost when that same testing is not available to others.  This study supports that competitive young athletes are at higher risk then the general population of their peers participating in recreational sporting activities. The only other study to compare this was by Corrado (1999) who also found a higher risk of SCD in competitive athletes compared to age-matched controls (RR 2.5).  These population based studies support efforts for more intensive primary prevention of competitive athletes that are at a higher risk.

I don’t think that athletes necessarily have a higher prevalence of cardiovascular disorders at risk for sudden death.  I believe the difference is in exposure time – with competitive athletes engaging in moderate or vigorous physical exertion more often than recreational athletes – and thus being exposed to the potential trigger (exercise) for SCA in the setting of their underlying heart condition.

The study found an annual incidence of sports-related sudden death of about 1 in 100,000 young competitive athletes in France.  This is consistent with population data from Norway (Solberg 2010) and about 2 times higher than prior estimates in the U.S.  Harmon et al. (2011) recently published a very high rate of SCD in U.S. college athletes (1:43,000), with some risk groups such as black male athletes with an alarming rate of SCD (1:13,000).

As expected, the study confirms the critical impact of bystander CPR and early defibrillation after SCA.  It is interesting that both CPR (OR 3.73) and defibrillation (OR 3.71) had about the same influence on survival in the multiple logistic regression analysis.  Clearly both carry tremendous importance in improving survival after sports-related sudden death.  With a mean time from collapse to initiation of CPR of 4.8 minutes, and a mean time from collapse to first shock of 12.5 minutes, recommendations for improved bystander CPR training and access to AEDs in the sports setting is warranted. I suspect that if AEDs were more available and therefore defibrillation provided with less delay, that the odds ratio for use of defibrillation would be even higher.

The study breaks down the etiologies of SCD in young competitive athletes which are also very valuable.  The most common cause was unexplained, and many other studies also support that the leading cause of SCD in this age group is autopsy-negative sudden unexplained death, perhaps representing underlying ion channel disorders.  HCM or possible HCM represented only 14% of the cases in the study, which has been heavily suggested as the leading cause of SCD in U.S. athletes.  More research is needed to understand these differences, if they are real or influenced by methodology, ascertainment bias, and/or ethnicity.

2. Graphic (above) is the cover of the September 2009 IOC-supported special theme issue on sudden cardiac death – Table of contents here – http://bjsm.bmj.com/content/43/9.toc

3. For a more recent paper, see Online First (not free) – Automated external defibrillator use at NCAA Division II and III universities by Drezner, Rogers and Horneff