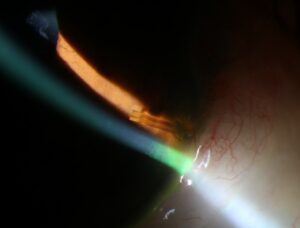 Before social media, novelists could help or hinder medical progress for humans and animals, as often their works were serialised. This article discusses the strong influence of Wilkie Collins, H.G. Wells and John Galsworthy on public acceptance or rejection of the medical use of vivisection. Collins, in the nineteenth century, was totally against vivisection. Wells and Galsworthy, in the twentieth century, were at first against vivisection, but changed their minds as they grew older. Galsworthy very likely became an indirect beneficiary of vivisection. His celebrated status as Nobel Prize winner and change of heart helped advance modern medicine. An example of modern vivisection is in the photograph. This shows a human eye, vivisected with a Xen Gel stent to prevent loss of sight from glaucoma. This minimally invasive surgery was tested initially on rabbits, vivisected under anaesthesia, and euthanased after the trial period. The article’s discussion, re-worked, also appears in the forthcoming book, John Galsworthy’s Compassion: All Beings Great and Small, published by Palgrave Macmillan.

Listen to the author discuss the work below:

Jill Felicity Durey is an Honorary Associate Professor in the School of Arts and Humanities at Edith Cowan University, Perth, Western Australia, where she lectured for twenty-six years in English and Writing, before retiring in 2016. Her first degrees were in Russian and Swedish language and literature, before taking a doctorate in Comparative Literature. Her works include Realism and Narrative Modality: The Hero and Heroine in Eliot, Tolstoy and Flaubert (1993), Trollope and the Church of England(2002), and Degrees of Intimacy: Cousin Marriage and the Nineteenth-Century Novel (2014), and her forthcoming John Galsworthy’s Compassion: All Beings Great and Small.

'A Procedure Without a Problem, or the face transplant that didnt happen. The Royal Free, the Royal College of Surgeons and the challenge of surgical firsts

The making of a professional digital caregiver: personalisation and friendliness as practices of humanisation