… and they go and screw it up.

A few weeks (months?) ago, I got a call from Cosmopolitan to ask if I’d talk about home-testing kits for genetics – stuff like what 23andMe offers.  We talked, and I like to think that I said something useful… and promptly forgot all about it, until just now, when the University of Manchester press office sent me a link to this: a story about HIV self-testing kits in the UK.

It’s a piece that quotes me.  It quotes me from that interview I did about genetic – genetic! – tests:

“People invest a lot in genetic information and it could have a serious psychological impact. Someone could feel anxious, distraught, even suicidal if they find out they are carrying a gene associated with particular diseases.”

Can you see the problem here?

Apart from the fact that I’m not, and am unlikely soon to be, a Professor, I mean?

OK: for clarity’s sake (and just in case there are any Cosmo readers who’ve drifted here): genetic tests and HIV tests are VERY DIFFERENT THINGS, and raise CORRESPONDINGLY DIFFERENT PROBLEMS.  I don’t think that HIV is a genetic condition.  Only idiots think that.  Some of the problems with one might well be problems with the other.  But we can’t leap between the two so easily.  I don’t know what I think about home HIV tests; I’ve not thought about them much, and noone’s asked me to have an opionion on them yet.  THIS QUOTATION MAKES ME LOOK LIKE AN IDIOT.

Also, they put words in my mouth.  I can’t remember what I said, but I doubt it’d’ve been anything as fatuous as “Someone could feel anxious, distraught, even suicidal if they find out they are carrying a gene associated with particular diseases.”  That’s simply not the kind of thing I say.

Yes, I’m posting here shamelessly, because I don’t want that particular piece to appear if people Google me without some kind of balancing act.  And I’m posting a screengrab just below the fold for posterity’s sake, just in case Cosmo deletes the page. 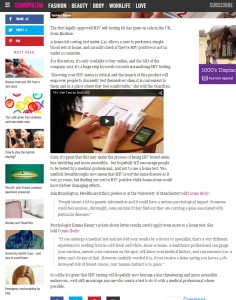