For some time, I have been interested in the relationship between magic and medical ethics.  Five years ago, I gave a talk in Prague on how to use magic in medical ethics education.  More recently, I held a workshop on Magic for Anaesthetists, which touched on ethical issues in anaesthesia.  My latest ‘guest’ lecture is entitled Magic, Medicine and Medical Ethics and examines the ways in which the work of professional magicians can shed light on the art and ethics of medicine.

This blog is for those who teach medical ethics.  It explains how a magical effect can help convey ideas in a memorable and thought-provoking way.  I am grateful to Gerry Griffin, a fantastic card magician from the United States, for permission to use one of his effects.  I respectfully ask readers to keep the secret to themselves.

Imagine giving a lecture to students or clinicians on consent, a topic of vital importance but prone to dry expositions.  Once you have explained the theory and law of consent, and identified the relevant guidance, you describe some of the practical challenges of obtaining consent.  It is at this point that I suggest performing this effect (“Let me give you a little demonstration”).

I recommend using the effect to demonstrate the fact that, although a choice might appear absolutely fair, subtleties in the way information is presented can undermine the freedom of a decision.  Some of these subtleties can be non-verbal, such as the use of pauses or gestures.  Most clinicians will recognise that the way they impart information is weighted towards getting the patient to give consent.

The effect below is baffling but simple enough for complete beginners.  Once you have mastered the technique, do not neglect the presentation.  As magicians like to say, the magic happens in the mind of the spectator rather than in the hands of the magician.

In written form, the effect looks more complicated than it actually is.  Do not be put off.  In reality, it is straightforward, and the small effort invested will pay dividends.

A spectator/student shuffles a pack of cards.

Without changing the order of the cards, the magician/teacher removes two ‘prediction cards’ from the shuffled pack (e.g., the 5 of diamonds and 10 of clubs) and sets them aside.  These two cards are not shown to the spectator.

The pack is returned to the spectator, who removes any number of cards from the top, middle and bottom of the pack and places them on the table. 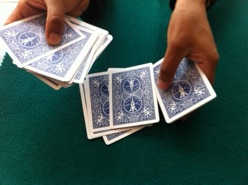 The rest of the pack is discarded.

The spectator picks up the cards he dealt on the table, and deals them, face down, into two piles. 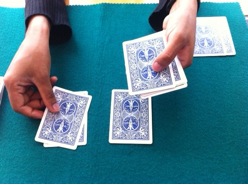 The top card on each of the two piles is turned over. 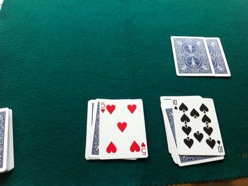 The spectator agrees that he (or she) chose freely:

Yet, miraculously, those cards match the two ‘prediction cards’ removed earlier by the magician (i.e., the 5 of diamonds and 10 of clubs). 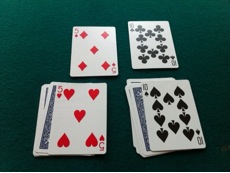 A table or other surface 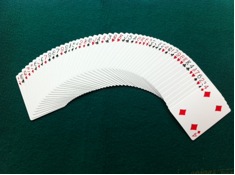 The pack can be truly shuffled by the spectator (“I would like you to shuffle the pack as much as you want.  Done?  You agree that the order of the cards is now completely random?  You did not feel forced to shuffle in that way, or to stop at that point?“)

Once the pack is returned to the spectator, the magician says he will try to predict the future by picking out two ‘prediction cards’.

This is where the dirty work happens.  As you spread out the cards to look for the two prediction cards (do not worry if you cannot produce a neat fan, as in the photo below, just go through them in any way you want), subtly note the top two cards of the pack.  Here, the 5 of hearts and 10 of spades. 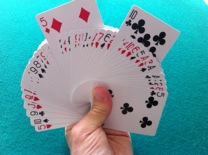 Then, look for the ‘partner’ cards, hence the 5 of diamonds and 10 of clubs.  Those will be your prediction cards.  Without showing them to the spectator, remove the two cards and place them face down on the table.

Stress that you have not changed the order of the cards that were shuffled by the spectator. You have merely removed two cards.

Hand back the pack to the spectator.  At this point, I say “here, take the pack.  I don’t even want to touch it“.  The key is to give the appearance of complete fairness.  Tell the spectator to deal some cards in a pile on the table.  You want him to deal at least the top two cards (which are the 5 of hearts and 10 of spades). 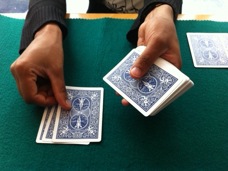 Once he (or she) has dealt a few cards from the top, say something like “actually, why don’t you take a few cards from the middle of the pack and even some from the bottom.  That way, it will be truly random.  Stop dealing cards whenever you feel like it.  I want this to be as fair as possible.”

Once he has placed a pile of cards on the table, take the rest of the pack and place it aside.  It is no longer needed.

Recap what has happened for the spectator:  he has shuffled a pack of cards, randomly.  You picked out two cards without altering the order of the pack.  He then selected a random number of cards from random parts of the pack onto the table.

Finally, ask him to deal the cards on the table into two piles, one by one.

The top card (i.e., the last card dealt) on each pile will be the two cards that were on the top of the pack when it was first handed to you after the shuffle (i.e., the 5 of hearts and 10 of clubs).  Once they have finished dealing, say that you are now left with one card on top of each pile and ask them to turn them over.

In dramatic fashion, reveal your two prediction cards and await the shower of applause. 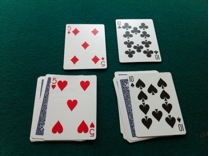 If lecturing to a large audience, consider getting some ‘jumbo’ playing cards.  In the photo below, a regular pack is seen on the left hand side.  The cards on the right are about A4 size. 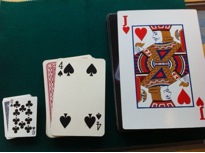 An alternative is to use regular cards and a document camera which projects onto a large screen.

I have suggested using this effect to demonstrate the practical difficulties in obtaining valid consent.  There is a temptation to manipulate the provision of information to get what you want (usually, the patient’s consent to the procedure).  This manipulation can even occur at a subconscious level.  In my experience, this ‘demonstration’ encourages clinicians to look afresh at how they obtain consent.  It stimulates a frank discussion on how consent is obtained ‘at the coal face’ and what can be done to improve the quality of consent.  The role of context, setting, time pressure, trust, expectations, knowledge, power, and the dynamics of the clinician-patient relationship on consent can all be explored through the judicious use of this single effect.  It can open up the richness of the topic.

There are myriad possibilities with this effect.  I have used a similar trick in sessions on futility and research ethics, for example.  The suggested patter is no more than that, a suggestion.  Tailor the patter to the topic, and to your own personality.

Please do get in touch if you choose to perform this effect in your teaching.  I would be delighted to hear about your experiences.  Best of luck!