Last week I wrote about “tortured phrases”, a term invented by the authors of an arXiv preprint in which they highlight the ways in which fake scientific papers are being produced using probabilistic text generators. That such papers are fake can sometimes be detected if they incorporate non-standard phrases that are supposed to convey the same meanings as proper scientific phrases but have been rewritten as tortured phrases. Instead of attempting a definition of “tortured phrase” I offered examples, such as “enormous information” instead of “big data”, but now here is a suggested definition:

I think that the choice of the word “tortured” to describe these phrases is a good one, coming as it does from an IndoEuropean root TERKW, meaning to twist, as can be seen from its etymography, shown in Figure 1. “Tortured” describes quite well what has been done to form the constructs so described, twisting the words that denote them, and by implication twisting the scientific literature. 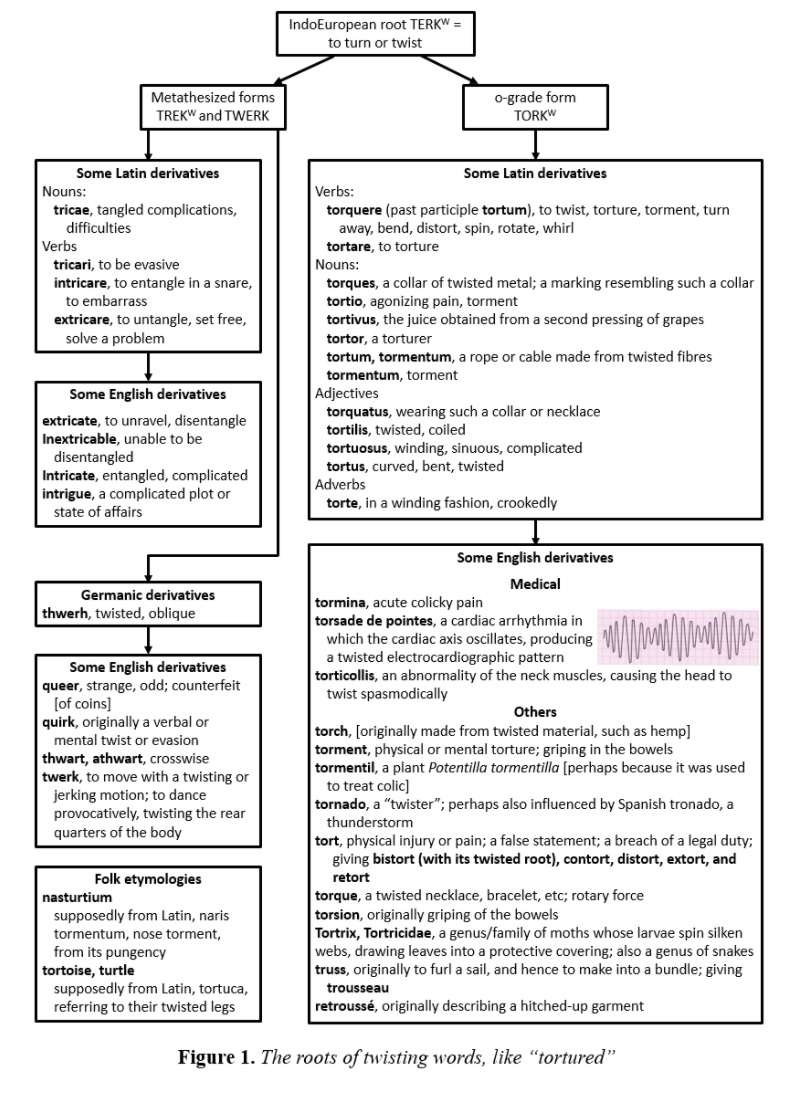 Tortured phrases are typically formed by translation from one language to another, followed by back translation to the original language. To explore how often this might lead to tortured phrases, I have taken the phrase “artificial intelligence” and, using Google Translate, have translated it into 121 different languages and then back-translated the results into English.

In 111 cases (92%) the back-translation turned out to be “artificial intelligence”. In most cases each of the English words was directly translated and they were then put together, in either order. For example, in Portuguese the phrase becomes “inteligência artificial” and in Norwegian “kunstig intelligens”. Something similar happens in Russian, but with an interesting twist, as it were: the phrase becomes “искусственный интеллект” (“iskusstvenny intellekt”), where искусственный means artificial; but in Russian интеллект means both intelligence and intellect. And in some English language papers by Russian authors the phrase “artificial intellect” is used (here, for example, and here).

In 10 of the 121 cases some peculiar results emerged, as shown in Table 1. Some of the back-translations are convincing tortured phrases. 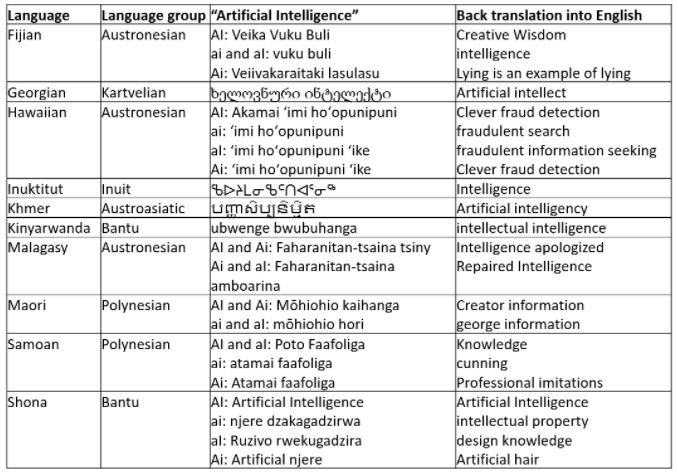 This form of reverse translation is not necessary for the production of tortured phrases, as I demonstrated last week, when I used synonyms to turn “artificial intelligence” into “fake news”, without going via an intermediate language. However, I didn’t anticipate the emergence of “fraudulent search” when back-translating from Hawaiian.

Some languages need indirect translation to render the phrase. For example, in Zulu, “ukuhlakanipha okungekhona okwangempela”, which back-translation renders as “artificial intelligence”, literally means “wisdom that is not real”.

Another example, the best of all in my view, features in this week’s cartoon, below.