Last week I analysed citations in the Oxford English Dictionary (OED) taken from The BMJ. This week I have looked at what The BMJ said about the OED when it was first published.

In 1857 Richard Chenevix Trench, Archbishop of Dublin, proposed to the Philological Society the creation of a new English dictionary, and in 1876, after much preparatory work, the society suggested to the publishers Macmillan that James A H Murray should be invited to edit it. Negotiations with Macmillan broke down, but Oxford University Press took up the project. The original proposal was for a four volume work of 7000 pages, and the work, begun in 1879, was expected to take 10 years. In the end it took nearly 50 years, and the New English Dictionary, later called the Oxford English Dictionary, ran to nearly 16 000 pages, issued in instalments (Figure 1), many of which were reviewed in The BMJ. 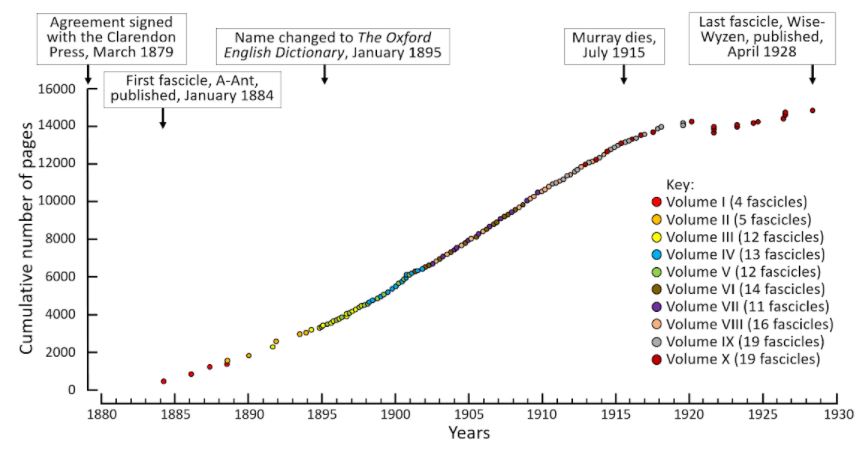 Figure 1. The progress of the first edition of The Oxford English Dictionary, originally called the New English Dictionary, from the signing of the agreement in 1879 to complete publication in 1928, with a supplement already promised; the dictionary was published in 125 instalments (in fascicles, each represented by a point on the graph), one every three months when output was most productive, but more slowly at the beginning and the end; its 10 volumes were also published piecemeal from 1888 to 1928; Murray was joined by other editors, Henry Bradley in 1888, W A Craigie in 1901, and C T Onions in 1914.

The journal first reviewed the dictionary in October 1886, noticing the first two fascicles, A–Ant (published January 1884) and Anta–Battening (November 1885). The reviewer was not complimentary: “…we lay the work down with a feeling of regrets either that the editor included so many medical words, or that he omitted so many others of equal or superior value.” The review continued in this curmudgeonly fashion: “Among the words which should have been inserted under the rule that all scientific words, English in form, find admittance, are:- Absorbing (var., of absorbent, Abernethy), achromatous, acrid (sb. In Dr. Friend’s Emenologia, and Ziemssen’s Cycl.), additamentary, adelomorphous, adenomatous, aerobe, aeroscope, afebrile, aged sight, agrammatism, albuminuric, ambulant, amenorrhoeic, amoeboid (sub., Carpenter), ankle-clonus, anisotropous, anorchism, aponeurotome, archiblastic, Argyll-Robertson (adj.), arthrectotomy, atalectic, autogenetically, azoted, back-splint, bacteriform, balneo-therapeutics, bar (at neck of bladder), bar-shot (calculus).” The dictionary later caught up with several of these: for example, “achromatous” in 1997, adenomatous in 1972, and aerobe in the 1933 supplement. Some, however, have not yet been noticed, including additamentary, a term describing foreign bodies deposited in gouty tissues, which The BMJ noticed in 1858 in a book on gout by Dr Robert Adams; agrammatism, an inability, due to brain damage, to speak grammatically (BMJ 1927); and “aponeurotome”, a device for incising the linea alba during abdominal surgery (BMJ 1887).

The reviewer might also have mentioned the omission of “appendicitis”, which Murray later claimed was in part occasioned by advice he had received from the Regius Professor of Medicine, Henry Acland, that it was “a very obscure and rare disease”. However, Anta–Battening was published in 1885 and the earliest written example of “appendicitis” that can be found dates from 1886, as The BMJ noted in 1887, so Murray can hardly be blamed for the omission, which was rectified in the 1933 supplement. Furthermore, as Peter Gilliver has pointed out in his excellent history, The Making of the Oxford English Dictionary (OUP, 2016), Murray was under pressure—particularly from the chairman of the Delegates of the Press, Benjamin Jowett—to omit technical vocabulary from the dictionary.

Then, in March 1890, another anonymous reviewer published an enthusiastic review of the sixth fascicle, Cast–Clivy, 4 months after its publication: “…it is only the bare truth to say that so much light has been poured on the early meaning, later uses, and original derivation of [medical] words that even in medical philology the Dictionary inaugurates a new departure.” His illustrative examples included catarrh, cataract, cirrhosis, chiropodist, and chloroform.

This reviewer was later identified as John William Ballantyne, who went on to publish over 50 reviews of OED fascicles, each under the heading “Medical terms in the New English Dictionary”. No more reviews appeared after Ballantyne died in 1923.

Oxford appreciated Ballantyne’s reviews. On 18 July 1908 Murray wrote to the journal referring to “…its careful and scholarly notices of the successive parts of the New English Dictionary, in so far as this deals with medical terms”. Could readers, he asked, antedate a 1580 example of “probe” as a surgical instrument? Apparently not. But they were probably not familiar with La Grande Chirurgie by Guy de Chauliac, translated into English in about 1425 and currently cited as including the earliest instance of “probe”.