The Oxford English Dictionary (OED) is updated every three months (“on a quarterly basis” as they put it—they mean “quarterly”). The latest list of updates and additions, published in June 2021, contains 675 main items in four categories, plus other changes:

In addition to these, etymologies have been revised and errors corrected (Figure 1).

Figure 1. An example of a correction to an OED entry, posted in June 2021; the author of the first citation was not Edelman (top panel), but Edelson (bottom panel); also corrected in June 2021 are over 200 citations from different editions of the Oxford Textbook of Medicine, previously attributed to its editors “J. Weatherall et al.”, now corrected to “D. J. Weatherall et al.”; however, the authors of the chapters from which the citations were taken are mostly not credited 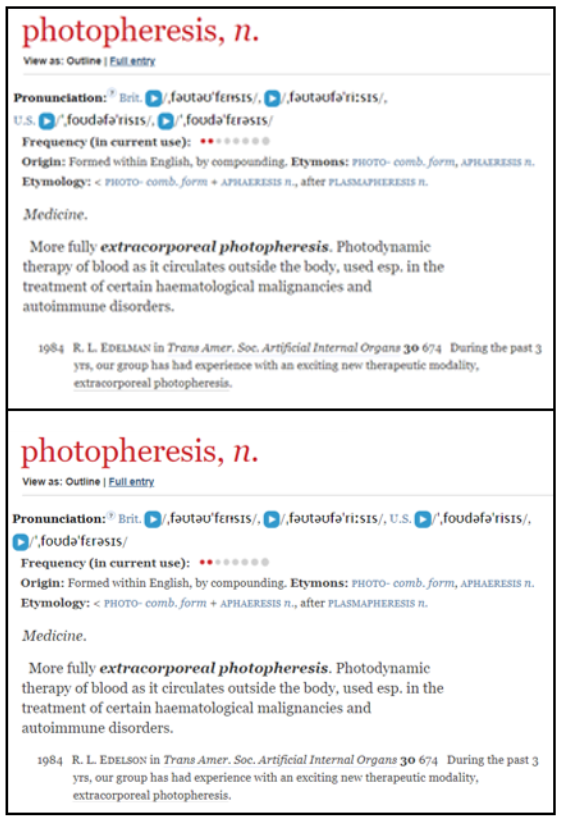 Items new to the dictionary do not have to have been recently coined—the dictionary is constantly catching up. Figure 2 shows a frequency distribution of the numbers of entries whose first citations date from each century since 1100; some are surprisingly old. The most recent dates of citations are also shown—newly added words may already be rare or obsolete.

The newly entered words of medical interest are listed in Table 1. Pharmacological interest in the list is limited to one medicament and one adverse drug reaction.

Table 1. New medically relevant entries in the OED included in the June 2021 list of updates 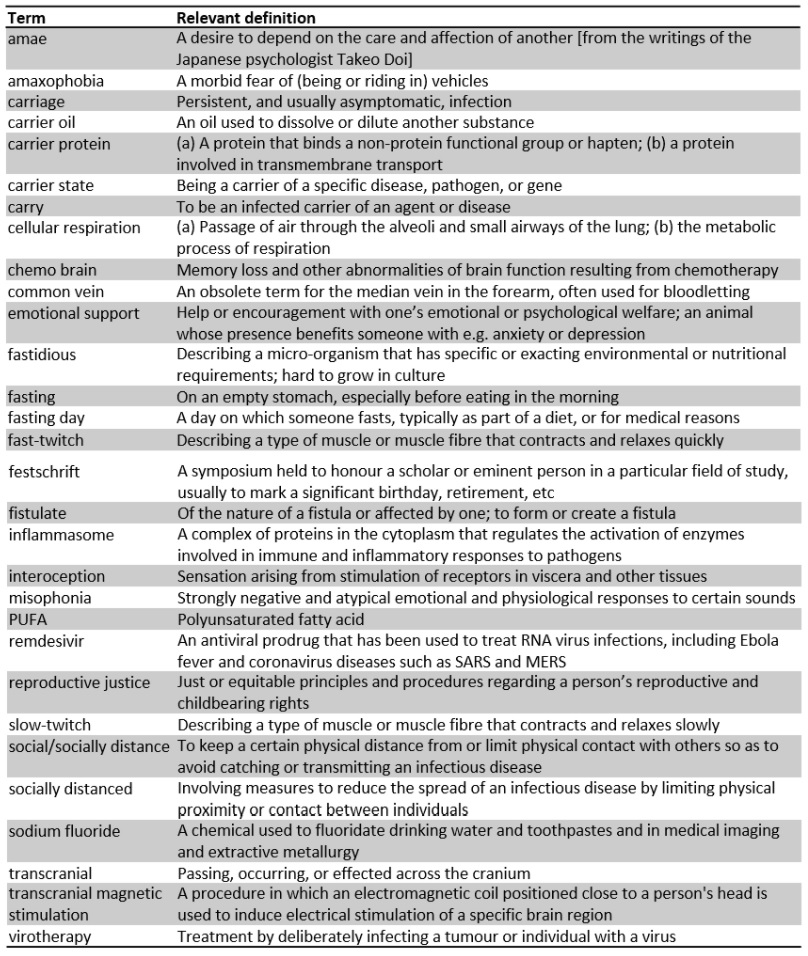 The medicament is remdesivir, originally code named GS-5734, a phosphoramidate derivative of adenosine (Figure 3). When parsing the origin of a drug name it is best to start at the end and work backwards. The –vir in remdesivir is a common suffix (as in aciclovir) or infix (as in delavirdine) indicating an antiviral action; –desi– is derived from components of adenosine; and the prefix rem– is what is known as a fantasy prefix, an often meaningless set of letters chosen by the manufacturer to distinguish its product from others with the same ending. For example, the sim– in simvastatin and the ator– in atorvastatin distinguish them from other statins. Some prefixes are whimsical rather than arbitrary. For example, Piero Sensi and his colleagues at Dow–Lepetit Research Laboratories in Milan used to give new compounds nicknames; matamycin, for example, they named after Mara Hari, and the rifamycins, such as rifampicin, after Jules Dassin’s 1955 French heist movie, Rififi, full title Du rififi chez les hommes, which roughly translates as “men behaving badly”. It was hoped that remdesivir might prove beneficial in SARS-CoV2, by inhibiting the virus’s RNA-dependent RNA polymerase. However, a viral “proofreading” exonuclease repairs the damage done by the drug. The WHO has advised against using remdesivir to treat covid-19.

Figure 3. Remdesivir enters cells, where the phosphoramidate carrier is hydrolysed by esterases and the active triphosphorylated analogue of adenosine (also shown) is formed by intracellular nucleoside-phosphate kinases 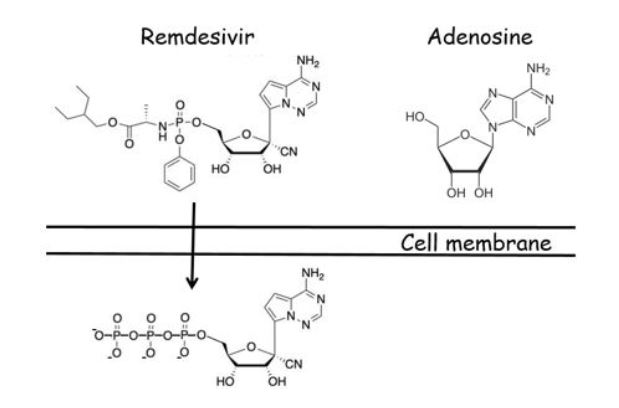 The adverse drug reaction newly recorded in the OED is cognitive impairment associated with various chemotherapeutic drugs. It was described over 40 years ago and later given the sobriquet “chemo brain”. The earliest citation is from 1991 in the San Francisco Chronicle. It is also known as “chemo-fog”, which deserves its own dictionary entry.

I also note a new entry on “festschrift”, which I wrote about in this column in May 2019. I pointed out that although the original meaning of the word, literally “celebratory writing” in German, was “a collection of writings forming a volume presented to a scholar or savant on the occasion of his attaining a certain age or period in his career”, today it has come to mean a symposium at which such papers are presented. The dictionary has now caught up with this. The first definition has been changed to “1. A collection of writings published in honour of a scholar, usually to mark a significant birthday, retirement, etc” to match a new definition: “2. A symposium held to honour a scholar or eminent person in a particular field of study, usually to mark a significant birthday, retirement, etc”. However, a footnote adds “Typically, the papers from the collection of writings described at sense 1 are presented during the symposium.” This is not my experience; often the papers are published after the meeting, sometimes not at all.