While my contribution to this section of The BMJ was being published last week, I was in Manchester, at a festschrift for my colleague Brian Houston, marking his retirement, on his 70th birthday, from the University of Manchester, where he has worked for over 40 years.

Few readers of The BMJ will have heard of Brian, but his contributions to studies of drug metabolism, drug-drug interactions, and particularly in vitro in vivo extrapolation (IVIVE) have been exceptionally influential. Of 251 of his papers listed in PubMed, 93 (37%) include both of the terms “in vitro” and “in vivo” somewhere in the text; 24 (9.6%) include both terms in the titles. His publications are highly regarded, with nearly 15 000 citations in all and an h index, for those who like that sort of thing, of 64. His 1994 paper on how in vitro drug metabolism data can be used to predict in vivo metabolic clearance has been cited over 800 times. He has supervised 65 PhD students, which may be something of a record, and has mentored about 35 other postgraduates. How influential his work has been is exemplified in a recent FDA decision to approve a generic formulation, whose systemic availability was judged to be acceptable from theoretical modelling, without the need for clinical evidence.

Together these two roots give us “festschrift”, a loanword from the German, literally “celebratory writing”. It is defined in the Oxford English Dictionary (OED) as “a collection of writings forming a volume presented to a scholar or savant on the occasion of his attaining a certain age or period in his career”. This meaning is also given in every other major dictionary that I have consulted: The American Heritage Dictionary, the Chambers Dictionary, Collins English Dictionary, Merriam-Webster dictionaries, including Webster’s Third New International Dictionary, and many others.

But nowadays the word is much more often used, in my experience, to mean a symposium held to honour an academic, usually one who is about to retire. This is a meaning that I have not found recorded anywhere. Typically, writings about festschrifts refer to written festschrifts, as one would expect.

The figure below shows the numbers of instances of the word “festschrift” as textwords (blue dots) or in the titles (orange dots) of publications indexed in PubMed, 1903–2018 (where no blue dots appear the word occurs only in titles). The patterns for other terms generally show monotonic increases (even when corrected for the monotonic increase in the total numbers of papers being published over the years); here the pattern is chaotic. 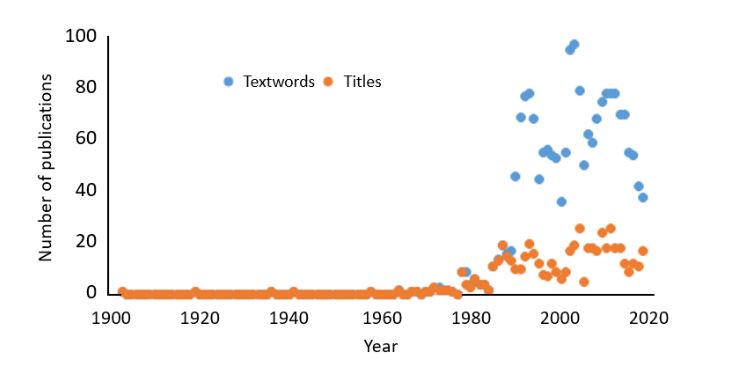 Some have reported that festschrifts became more common in the USA when Jewish immigrants, fleeing Nazi Germany, arrived in the 1930s. However, the bibliographic evidence does not seem to support that. The first citation in the OED is from 1898, in the Bulletin of the American Mathematical Society. The earliest publication listed in PubMed referring to a festschrift is from 1903, and the pattern of publications shows no evidence of increased interest until the 1980s. But perhaps the pattern is different in the humanities.

A liber amicorum was a type of publication, originally in Germany, popular in the 16th and 17th centuries, compiled by, for example, noblemen, students, lawyers, or diplomats, who encouraged their friends and others to include signed verses, inscriptions, or drawings, and sometimes their portraits and coats of arms. This Latin term is usually translated as “book of friends”, but “amicus” in Latin also meant a disciple or follower and so the term “liber amicorum” has also been used to describe a festschrift. The meeting that goes with it could then be called a “symposium amicorum”, a term that has occasionally been used.

Finally, I offer below a set of criteria for publishing festschrifts.