The Oxford English Dictionary (OED) is updated every three months (“on a quarterly basis” as they put it—they mean “quarterly”). The latest list of updates and additions, published in March 2021, contains 744 items. There are four categories:

Figure 1. Conventional and alternative names for the generations of Western populations; taken from various sources, including the US Census Bureau

Items that are new to the dictionary do not have to have been recently coined—the dictionary is constantly catching up. Figure 2 shows a frequency distribution of the numbers of entries whose first citations date from each century since 1100; some are surprisingly old. 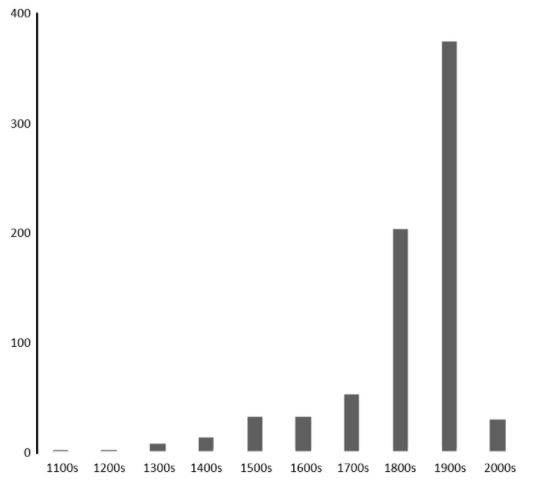 Figure 2. Frequency distribution of the dates of the first citations of the new entries in the OED, March 2021 (excludes one entry cited from early Old English)

The newly entered words of medical, or quasi-medical, interest are listed in Table 1. The list includes two pharmacological compounds.

Table 1. New medical or quasi-medical entries in the OED included in the March 2021 list 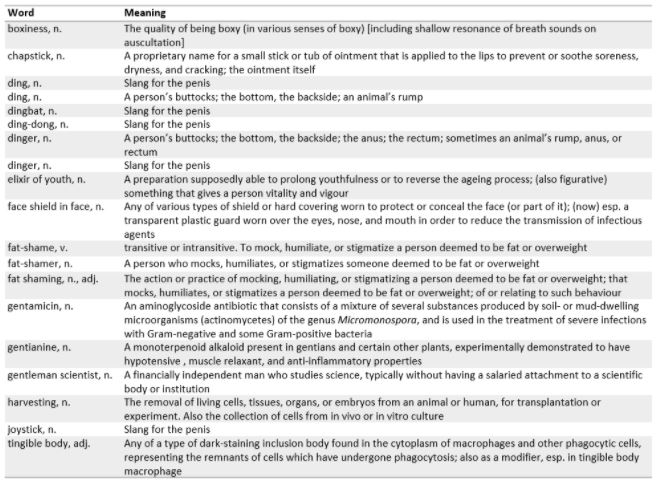 Gentamicin was first described in 1963, so it is surprising that it has taken so long for it to appear in the dictionary. Although the name was originally spelt “gentamycin”, the spelling was changed early on to “gentamicin” on the recommendation of the American Medical Association’s generic names committee, because, unlike many other antibiotics whose names end in –mycin, it was isolated from a genus of Micromonospora, not from Streptomyces organisms. Even so, a PubMed search shows that the spelling with –mycin occurs in about 10% of publications. Indeed, if you did not search databases for incorrect as well as correct spellings of gentamicin, you would miss several publications, including systematic reviews, that use the incorrect spelling.

The other compound, gentianine, seems to have made little impact, although it was mentioned in Chemical Abstracts as long ago as 1946. A PubMed search yielded only 23 hits, mostly in vitro and animal studies. It’s said to have hypotensive, muscle relaxant, and anti-inflammatory properties.

One set of entries that stands out, as it were, from the list are the five slang terms for the penis. This is by no means an exhaustive list, although one might get exhausted just thinking about it (Table 2). 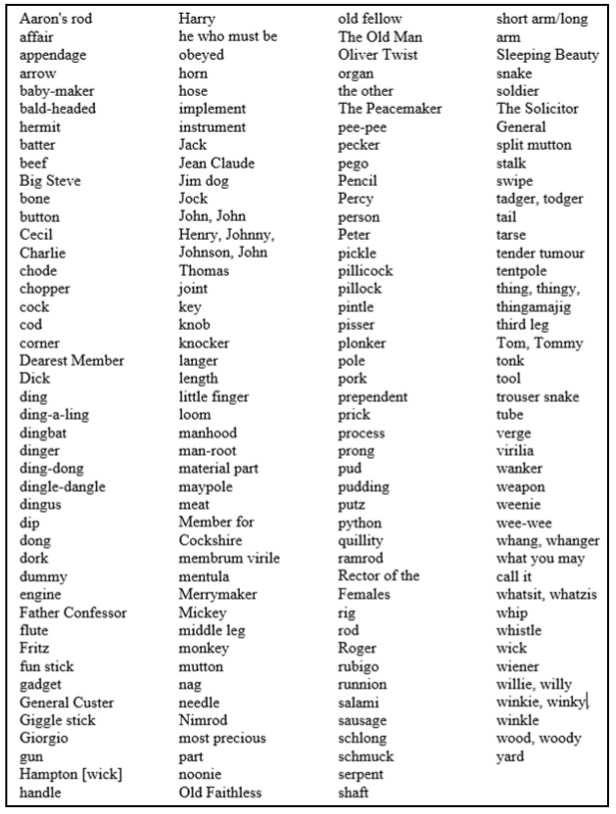 But the term I like best is “gentleman scientist”, defined as “a financially independent man who studies science, typically without having a salaried attachment to a scientific body or institution”. The dictionary cites an example from 1895 and also an article from a 1975 issue of the New Scientist magazine: “The days of the gentleman scientist are over; we’re professionals, we’re paid well …”. Consequently, the dictionary labels this “now chiefly historical”, but if that is so it should, in my view, be revived. It might be nice to be thought of as a gentleman scientist, were it not for the fact, judging from the activities of many twitterati, that the juxtaposition is a contradiction in terms.