“Sexual intercourse”, wrote Philip Larkin in his poem Annus Mirabilis, “began / In nineteen sixty-three / (which was rather late for me) — / Between the end of the ‘Chatterley’ ban / And the Beatles’ first LP.” The latter was, of course, titled “Please please me”.

The sexual revolution alluded to by Larkin, fuelled by the invention of oral contraceptives, was accompanied by a great deal of recreational drug use. Of course, recreational drugs had been around a lot longer, but the first instance of the term “recreational drug” dates from 1967 in a paper in the Journal of Health and Social Behavior. The term appeared from time to time during the 1970s, but only started to become more current in the 1980s (Figure 1). This is reflected in words linked to recreational drug use whose first recorded instances are attributed to the 1970s and 1980s in the Oxford English Dictionary. 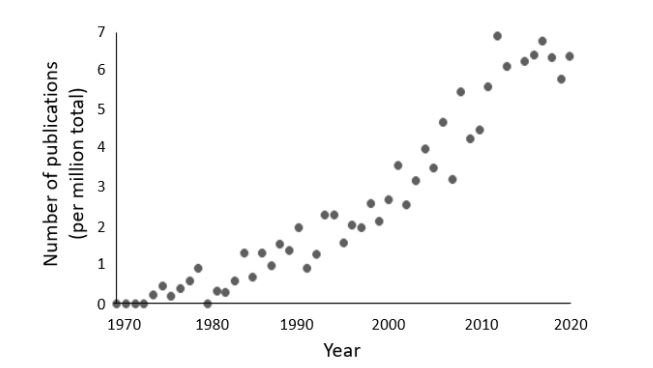 I have previously noted the nouns “sinsemilla” (1974) and “psychedeliac” (1975), but many nouns that describe different forms of marijuana were newly recorded in the 1970s, including: blow (1971: powdered cocaine or marijuana); cheeba (1971: a variety of Colombian marijuana); homegrown (1970: locally cultivated marijuana); Maui wowee (1971: a potent form of marijuana originating from Maui); Mexican brown (1976: types of heroin or marijuana from Mexico); pakalolo (1977: a potent variety of marijuana grown in Hawaii); and Thai stick (1976, antedatable to 1974: a marijuana cigarette). A munchie (1971, antedatable to 1968) is a snack eaten to appease the hunger caused by taking marijuana.

Many other slang terms are recorded in The Danktionary. An A-Z Guide to Stoner Slang (Adams Media, 2011) by Will B High, which might just be a pseudonym. The noun “dank” is defined in the OED as an obsolete noun meaning wetness, humidity, and damp, first recorded in Malory’s Morte D’Arthur from around 1400. But in The Danktionary we learn that it is a modern word used to describe pot that has been deemed to be of especially high quality, although we are warned that there are no universal criteria for grading the quality of marijuana and that inexperienced users should not use the term, as they may be embarrassed when their dank turns out to be schwag. The Danktionary tells us that schwag is marijuana of the lowest available quality, and warns that it should not be smoked except under the most dire of circumstances, such as after having flushed higher grade stash down the toilet during an unfortunate bout of paranoia. Unlike “dank”, “schwag” (1996) is listed in the OED, as is “swag” (1986) also defined as fake marijuana. The Danktionary also tells us that a Thai stick knocks the smoker out of commission longer than an organ solo from The Doors.

Incidentally “stoner”, referred to in the subtitle of The Danktionary, is defined as one who often gets stoned by smoking buds from the cannabis sativa plant. The term can be used as one of endearment, or, by non-smokers, derogatorily. In this sense, “stoner” is found in the OED only as an attributive (1987), as in a stoner comedy, a genre of film comedy (“stoner flicks”) in which the plot and action centre on drug use or stoner culture. Mainstream films that feature recreational drug use, such as I Love You Alice B Toklas (1968) and Withnail and I (1987), entertaining though they may be up to a point, don’t perhaps quite come into this category. Nor does the campus novel Stoner by John Williams, which is about a very sober university lecturer; first published in 1965, it was reissued in the UK by Vintage Books in 2003, to great acclaim.

Among the biomedical words newly appearing in 1980 (Table 1) two refer to drugs of abuse. The Malay word “dadah” means medicine, but its use has been restricted to controlled substances that are abused, dadah trafficking being punishable by death in Malaysia. And a narcotraficante is a South American term for a feared member of a drug cartel, especially someone who deals in or smuggles drugs. Cannabusiness, on the other hand, an excellent portmanteau word, refers to legitimate commercial activity concerned with the production and sale of cannabis or cannabis related products for both recreational and medical use.

There is a phrase that sums up the influence of the sixties in all this: “If you can remember the sixties, you weren’t really there.” It has been attributed to many different people, but who really said it? Well, I can’t remember.