Last week I listed the biomedical words whose first known written instances listed in the Oxford English Dictionary (OED) date from 1971. This week I have explored 1972 (Table 1). In 1970 and 1971 pharmacology led the way. This time biochemistry has caught up. 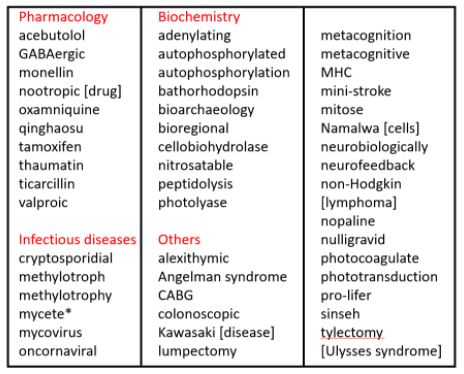 There are, however, two connected terms that I would have expected to have found in the  1971 and 1972 lists, but which have not yet made it into the dictionary.

The Greek hero Odysseus was born when Sisyphus seduced Anticleia, wife of Laertes and daughter of Autolycus, who had stolen Sisyphus’s cattle. In The Greek Myths, Robert Graves reported that Autolycus, invited by Anticleia to choose a name for the child, said, “In the course of my life I have antagonized many princes, and I shall therefore name this grandson Odysseus, meaning the Angry One, because he will be the victim of my enmities.” The Greek verb ὀδύσσομαι meant to hate or be angry. Liddell & Scott in their Greek–English Lexicon say that Odysseus was so named because he was hated by gods and men. Or perhaps the name was an expression of Autoclycus’s anger at his daughter’s seduction.

The word ὀδύσσομαι comes from the IndoEuropean root ODI, hate or disgust, as in odium. But in some cases the IndoEuropean letter D turns into an L in derivatives; for example, compare odour with olid and olfactory. So, in Latin Odysseus became Ulysses.

Recently, a systematic review of the biomedical literature via PubMed has unearthed 112 publications that refer to the myth of Odysseus or Ulysses, including the Ulysses contract, the Ulysses conflict, and three different Ulysses syndromes. Two other mythologically related syndromes also emerged, the Elpenor syndrome and the Penelope syndrome. However, other terms escaped notice, such as the Ulyxes genus of Australopapuan mites, of the family of Laelapidae. Laelaps, from λαῖλαψ a whirlwind, was one of Actaeon’s dogs, whose ferocious onslaught no beast could resist. Species of the Laelapidae have been named Ulyxes autolycus, Ulyxes euryclea., and Ulyxes theoclymenus, which have Odyssean connections. Eurycleia was Odysseus’s nurse and Theoclymenus was a prophet who sailed with Telemachus, Odysseus’s son, and foretold Odysseus’s return to Ithaca. The Odyssean connections are listed in Table 2.

Table 2. Biomedical terms involving the names of Ulysses or people connected with him

The Ulysses complex was first described in 1971. It has three aspects, related to the story of Telemachus: the absence of a father; an attempt to imagine a father replacement by the superego; and the consequent formation of imagined father–son affection, strengthening the ego. It should probably have been called the Telemachus syndrome.

The first Ulysses syndrome, described in 1972, involves a form of medicalization, which I discussed last week. In this case it starts with a false positive result in a healthy individual. This leads to other tests, the results of some of which will be either negative or falsely positive. Further investigations follow. Treatments based on presumed diagnoses then lead to harms. Rang, who first described the syndrome, gave an example. A boy falls and hurts his leg. An x-ray shows no trauma but there is an incidentaloma—an area of abnormal bone. Blood tests are negative. An orthopaedic surgeon biopsies the lesion and the pathologist diagnoses a minor fibrous cortical defect. The child falls on the slippery hospital floor and fractures his leg where the bone was weakened by the biopsy. He spends 6 weeks in plaster. Other examples have been reported (for instance, here and here).

Are we currently the victims of a form of Ulysses syndrome? Let us suppose that the point prevalence of covid-19 is 1%. Thus, of every 1000 patients tested at any time, 10 will have a true positive result. But the false positive rate of SARS-CoV-2 rt-PCR is somewhere between 0.8% and 4.0%, let’s say 2%. So, about 20 of the other 990 patients tested will have a positive result. Thus, of 30 positive tests only one-third indicate true infection (Figure 1). The higher the prevalence the better the ratio becomes, but even at a 2% prevalence half of all positive tests will be in people without the infection. Others have discussed this problem, which is not new, but generally ignored. To calculate the true rate of infection among those with positive tests we need to know both the prevalence and the false positive rate, but that information is never given in media reports. Without it, how can we interpret reportedly positive test results? 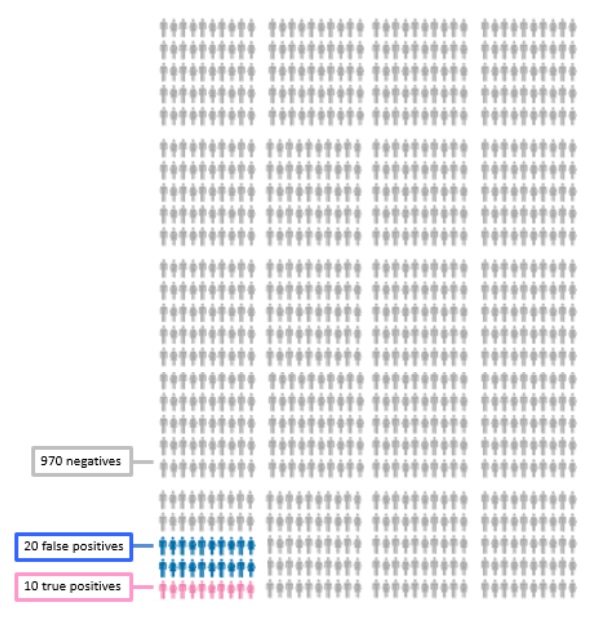