The World Health Organization has announced that it has temporarily halted the hydroxychloroquine arm of its Solidarity trial. This followed the publication in The Lancet of an analysis of registry data from 671 hospitals in six continents, involving over
96 000 patients who were given either chloroquine or hydroxychloroquine. The results suggested that these 4-aminoquinolines caused increased mortality, which was significantly higher when the drugs were combined with azithromycin or clarithromycin, macrolide antibacterial drugs, and cardiac arrhythmias were significantly more common. The provenance and quality of the data in this study have been questioned, and more information is awaited.

Robin Ferner and I have previously expressed concerns over the use of 4-aminoquinolines in the treatment of covid-19. We had four main concerns:

Last week I outlined guidelines for assessing the strength of a hypothesis that predicts a therapeutic outcome, primarily based on the consistency of the evidence. This echoes one of Bradford Hill’s nine guidelines for causation, which he described in 1965, in a lecture to the Royal Society of Medicine’s Section of Occupational Medicine, titled “The environment and disease: association or causation?” The question he asked about consistency was “has [the observed association] been repeatedly observed by different persons, in different places, circumstances, and times?” This is what we would nowadays call replicability.

In treating viral infections, the 4-aminoquinolines fail the consistency test, as illustrated by studies of chloroquine. In some laboratory experiments chloroquine inhibited viral growth, but in cells infected by Epstein-Barr virus it increased viral replication. In vivo, it reduced transmission of Zika virus to the offspring of five infected mice. However, while it inhibited Ebola virus replication in vitro, it caused rapid worsening of Ebola infection in guinea pigs and made no difference to mortality in mice and hamsters. It inhibited chikungunya virus in vitro, but worsened the course of infection in macaque monkeys. Although it inhibited dengue virus in some cell cultures it failed to shorten the illness in a randomized study of 37 patients, even though it improved some symptoms. And although laboratory studies suggested activity against influenza virus, chloroquine did not prevent infection in a large randomized trial.

In less turbulent times, and in the absence of better rival hypotheses, one might pursue the 4-aminoquinolines in randomized trials, despite this inconsistency. However, when many other stronger hypotheses are available, as is currently the case, to do so wastes time and resources.

We have discussed our second and third concerns in detail elsewhere, but attention has recently turned to the fourth, that drug-drug interactions might increase mortality in covid-19. A possible mechanism is their effect on cardiac repolarization, prolonging the QT interval on the electrocardiogram (called QTc when corrected for heart rate). This is associated with a risk of the polymorphous ventricular tachycardia called torsades de pointes. The risk is increased when drugs that have this effect are used in combination, especially in the presence of hypokalaemia, to which patients with covid-19 are susceptible, and in elderly people.

Two Oxford-based trials of hydroxychloroquine, COPCOV and PRINCIPLE, have now been halted, but the RECOVERY trial continues. While we wait for the results, hoping to learn that our concerns are not justified, Figure 1 and Table 1 provide some insights into the usage and spelling of the name that Dessertenne first gave to this difficult problem in 1969. 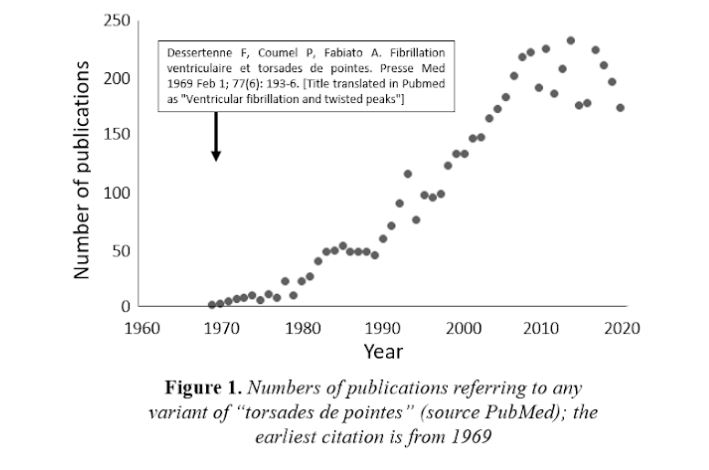 Table 1. Frequencies of different spellings of torsade[s] de[s] pointe[s] in bioscience publications (source PubMed); whether in French, English, or another language; the two most popular spellings are “torsades de pointes” and “torsade de pointes”, the former more so, not surprisingly, since it was the spelling that Dessertenne used

Note: The term, which means “twisting of the points”, describes the way a ballet dancer spins around while standing on the tips of the shoes; in the cardiac version the electrical axis of the heart twists round in a fancifully similar way, the so-called “cardiac ballet”