“No man is an island, entire of itself”. Eight words from John Donne’s “Meditation XVII”, one of his Devotions upon Emergent Occasions (1624), that remind us why isolation, a necessary precaution that we must undergo, is such a dreadful thing for many of us.

In an unusual aspect of orthography, the Greeks used a sign called a breathing over a vowel at the start of a word. A sign like a comma, a smooth breathing, was not sounded; a reversed comma, a rough breathing, was aspirated, like the letter aitch. For example, in Greek six was ἑξ, pronounced hex, as in hexachlorophene. But in Latin the rough breathing was replaced by the letter s, giving sex, as in sextet. Salt in Greek was ἅλς, [h]als, whence halides and halogens; but in Latin it became sal, from which we get sal ammoniac, saline, and salary, since the money with which Roman soldiers were paid was intended to be used to buy salt.

Because the sea is salty it was called salum in Latin. And the word for an island, insula, conjecturally comes from [terra] in salo, land in the sea. Or it could be terra insola, i.e. on its own, solo. From insula the French derived the noun “île”, an island (the circumflex marks the missing s), and the adjective “isolé” meant enisled or isolated.

The first attested uses of “isolé” in English texts, listed in the Oxford English Dictionary, are from the middle of the 18th century. Lord Chesterfield, for instance, in a letter to his son in 1757, proclaimed that he was “in every sense isolé”. Within a few years, however, an English form was found, and “isolated” appeared in the 1760s. Then some time later, a back formation emerged, as a verb, “isolate”, first attested in 1807, and an adjective, also “isolate”, perhaps partly influenced by the Italian form of isolé, “isolato”. The noun “isolation” is first attested in the dictionary in 1833 and attributed to Harriet Martineau: “The exiles condemned to the mines run a risk of isolation proportioned to the smallness of their numbers.” A problem with this analysis is that I have found earlier instances of “isolation”, including one from 1807 (Figure 1). There may be earlier instances, but I am not sure about their provenance.

Isolation takes two forms, mental and physical. Most of us should be able to cope with the former. We have many methods of remote communication, by telephone and video, by email and social media. Radio and television need not be affected, since broadcasters can work from home. In the Centre for Evidence Based Medicine we too have been working from home, producing material for the Oxford COVID-19 Evidence Service. My own contributions, in remote collaboration with others, have included articles on making prophylactic antibiotics available to be taken in case of an added bacterial infection, an analysis of current trials of pharmacological treatments for COVID-19, evidence for the efficacy of social distancing, how SARS-CoV-2 can spread through ocular fluids, and caveats about ACE inhibitors and ARBs. Other topics in preparation include: the pharmacology of chloroquine and hydroxychloroquine and evidence of their efficacy in COVID-19; and vitamin C.

But those without access to remote facilities may find mental isolation hard to cope with. And how much more difficult will it be to cope with physical isolation? Many people say that they miss the touch of others, and those who live alone will find isolation especially hard.

Here are two examples of the many studies on social isolation (Figure 2). In a systematic review of 22 studies, social rejection or isolation was one of the factors that contributed to the adverse psychological effects of SARS on employees. And in a study of neural responses to hand holding after bereavement, using functional magnetic resonance imaging, looking at a photograph of the deceased caused increased activity in the anterior cingulate cortex and, perhaps appropriately, the anterior insula; the effect on the insula was reduced by hand holding with a romantic partner. Apparently, the island in the brain can make us feel desolate. 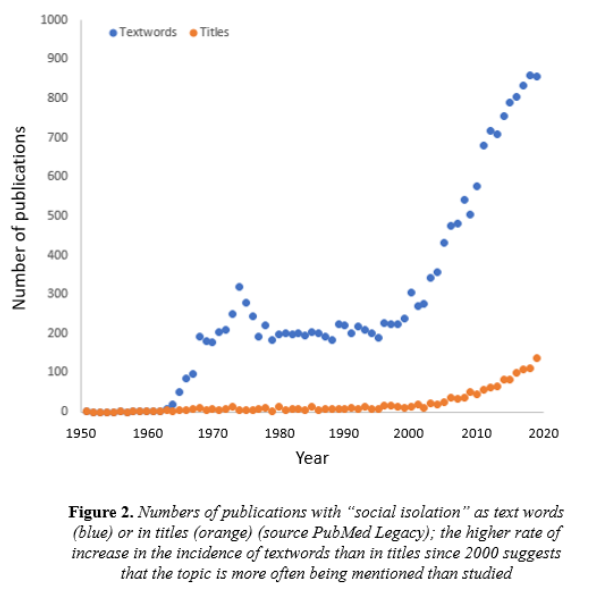 Hamlet seemed to think that he could cope with isolation. As he said,: “I could be bounded in a nutshell and count myself king of infinite space”, but then added, “were it not that I have bad dreams”. Of course, none of us, I suppose, has to cope with the suspicion that our uncle has murdered our father, but even minor concerns can stimulate bad dreams.

So remember John Donne’s meditation, given in full below; it contains more than one message of contemporary relevance, whether you’re religious or not.